Posted on January 18, 2013 by catholicvoicesmedia

Bearing the title ‘Speak Out for Marriage’, a million postcards – about as many as there are practising Catholics — are being distributed to parishes in England and Wales next week for signing by parishioners and forwarding to MPs. 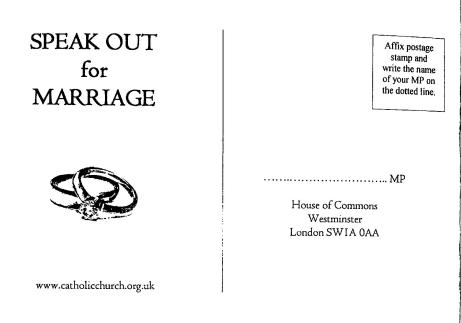 The postcard campaign, on the eve of the publication of the Marriage (Same-Sex Couples) Bill on Wednesday next week,  is one of the largest ever mounted by the Catholic bishops in the UK. It is intended to bring to bear the weight of Catholic opinion in the pews to bear on MPs, who will vote on the Bill in early February.

The Bill is expected to pass fairly easily — only 120 MPs out of more than 600 oppose it, and the party leaders back it  — but is likely to encounter strong opposition later this year in the Lords. So the bishops are right to believe that the cause is far from hopeless: the massive civil-society revolt over a similar proposal in France has already caused public support for the measure to slip back to just over 50 per cent.

The text of the postcard reads as follows:

As a concerned constituent I urge you to vote against the Marriage (Same-Sex Couples) Bill.

Please vote against it and let me know your views.

In a letter to clergy accompanying the postcard, the vice-president of the Bishops’ Conference of England and Wales, Archbishop Peter

Smith of Southwark, says “very many people within and beyond the Catholic community” made their opposition clear to the proposal when it was published last year. He goes on:

The time has now arrived when MPs will shortly be voting on whether or not to support this fundamental change in the law.  The bishops and others have strongly urged all political parties to offer all MPs a free vote on this matter of conscience and this has now been agreed by the party leaders.

It is therefore particularly important at this time for all MPs to be made aware of the strength of feeling on this issue among their own constituents, and the Bishops have received requests from a number of laity about mobilising further action. My purpose in writing is to ask you to urge the members of your congregation to make their own views known to their own MP …

The first key vote is likely to take place in early February so the time to act is now. We need to encourage as many people as possible to get involved. Please do all you can.