A shepherd’s farewell … and the gift of a monk-pope

Posted on February 27, 2013 by catholicvoicesmedia

Pope Benedict’s moving farewell address this morning in a thronged St Peter’s Square was not just a heartfelt expression of gratitude. It was also an important teaching moment, telling us much about the nature of a leadership at the service of others, rather than self. And it made clear his vision of that whatever else a ‘retired pope’ is and does, he remains directly in the service of the Lord.

In 2005 he accepted his election as God’s will, not because he wanted or sought it. The papacy has been a “great weight”, only bearable because, despite “turbulence and rough seas” and the fragility of the people through whom God steers the Church, “He never left—the whole Church or me—without His consolation, His light, or His love.” 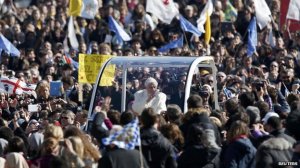 Some reports of the address hone in on the Pope’s graphic imagery of difficulties and setbacks: the Telegraph, picking out a line that there were times “when the Lord seemed to be sleeping”, even headlines its report, ‘Pope’s final address: God was asleep on my watch”.

But this is to miss the vital point Benedict XVI wants to communicate — the “news” that, whether the seas are rough or calm, “the Lord is in that boat … And the Lord will not let it sink … This was and is a certainty that nothing can tarnish.”

In other words, even if the Lord seems — to us, at times — to be asleep, He is in fact vigilant, ever-watchful, and ready to intervene.

The point of the address was to communicate the joy Benedict XVI feels at discovering, by experience, what this means to a pope — what it is to be guided and protected in a deep relationship with the Lord made possible by faith and the Church. Hence his invitation to people “to renew their firm trust in the Lord, to entrust ourselves like children to God’s arms, certain that those arms always hold us up and are what allow us to walk forward each day, even when it is a struggle.”

But this isn’t just an individual experience, because one of the ways the God supports a pope is through “the concern, friendship, and prayer” of those who write to him, not as they would to a leader, but as a family member. In these messages, says Benedict XVI, “you can touch what the Church is—not an organization, not an association for religious or humanitarian ends, but a living body, a communion of brothers and sisters in the Body of Jesus Christ who unites us all.”

This is a hands-on experience: “being able to almost touch with our hands the strength of His truth and His love is a reason for joy at a time when many are speaking of its decline. See how the Church is alive today!”

Just as he accepted his election as God’s will, so, too, the need for his resignation. In a paragraph which gives a glimpse of the intensity of his prayers over the decision,  he describes how, seeing his strength drain, he “asked God earnestly in prayer to enlighten me with His light to make me make the right decision, not for my own good, but for the good of the Church.” The decision he made — “in full awareness of its seriousness and also its newness, but with a profound peace of mind” — makes clear that he discovered this was God’s will: not for his good — not as a means of casting off a weight which had grown too heavy, as some reported his decision – but for the good of the Church. For “loving the Church also means having the courage to make difficult, agonized choices”: making those choices in prayer leads to a choice which is for the good of others, for the good of the whole, free from the distorting influence of the ego.

In the same way, it’s clear that who he is and what he does from tomorrow evening, when he becomes an emeritus Pope, is defined by that same prayerful discernment of God’s will for him. He does not go back to being what he was before, to what he describes as a “private life” of trips, meetings, and conferences — the kind of life a retired professor, or bishop, might lead. Instead, he will “remain in the service of prayer, within St. Peter’s paddock”. Despite media reports of “confusion” or “ambiguity” about his future role, Benedict XVI is being here very clear: he will be a contemplative in the Vatican, one who does not travel or speak out or have any kind of public life, but whose intense life of prayer will serve the Church in another, equally important way.

He gives a clear indication of the model for this life: “St. Benedict, whose name I bear as Pope, will be a great example to me in this.” The sixth-century founder of western monasticism begins his Rule with the word ‘listen’. That is what the retired Pope Benedict will be: a listening-post, silent, receptive, open-hearted; one who sits lightly to the world, invisible to it; yet who, as he puts it, “belongs wholly to God’s work”.

It is clear: there will be no interference in the next papacy. But it will be of immense comfort to the man to whom God next entrusts the burden of St Peter’s office that, just opposite the Apostolic Palace, a wise emeritus pope-monk sits, waiting on the Lord in silent contemplation, one who knows what it is to bear the burden of that office, and who is always there, ready to listen, to offer counsel and comfort. That is a gift no supreme pontiff has before been given; and it is one for which the next pope will be immensely grateful.