The cardinals have decided not to speak. They have not been ‘muzzled’

Posted on March 7, 2013 by catholicvoicesmedia

Shortly before yesterday’s daily 1pm briefing by the Vatican’s spokesman, Fr Federico Lombardi, the US bishops’ spokesperson cancelled a 2.30pm press conference at the American seminary in Rome, the North-American College (NAC). Asked why, Fr Lombardi said the College of Cardinals, who are meeting daily in advance of the conclave to elect the next pope, had “decided to maintain an increasing degree of reserve” — riservatezza — in respect of their discussions. 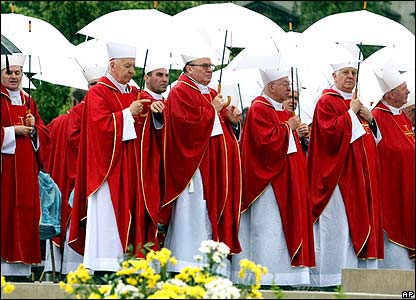 This was, indeed, a decision by the College of Cardinals, who are the supreme authority of the Church in the interregnum; ‘the Vatican’ at this time has no authority over them. It was a decision that was voted on by the cardinals during their General Congregation of yesterday morning, following a discussion.

The decision precisely mirrors the one taken by the College prior to the conclave of 2005, when the cardinals decided to stop talking to the media in the period between the funeral of Pope John Paul II and the conclave which elected Benedict XVI.

Then, as now, the American cardinals wished to keep speaking to the media right up to the conclave, seeing it as a great opportunity to communicate with the 70m Catholics who  were following events in Rome. But other cardinals — especially the curiali — took the opposite view: that speaking to the media would create a distracting buzz at a time when the cardinals needed a reflective environment.

The curial cardinals, with their long sense of history, know how hard in the past it has been to keep the election of a pope free from interference by kings, emperors, and factional interests. Some see the Italian media’s propensity to run lurid stories of conspiracies and intrigues as unhelpful during the election process.

In 2005, therefore, a compromise was proposed: the cardinals were free to speak to the media before the funeral, but agreed not to afterwards. The proposal was put to a vote, and agreed. This allowed about five days of radio silence before entering into the conclave proper.

This year, although we don’t yet know the details, a similar agreement is likely to have been reached. No doubt the agreement of 2005 was regarded as positive, and the College thought it right to do something similar. (It has since been clarified that the cardinals did not vote yesterday, but nonetheless agreed.)

The media reports fail to capture the nature of these pre-conclave deliberations. They are a precious chance to gather information about the Church and the world, and to quiz each other about this or that candidate. From these discussions, a profile of the next pope emerges, so that when they enter the conclave, each cardinal has a good idea of whom he wants to vote for.

In a press conference Tuesday, Cardinals Sean O’Malley of Boston and Daniel DiNardo of Houston-Galveston made clear that this process must take “the time that it takes”. Cardinal O’Malley pointed out that if they don’t spend enough time in the general congregations, there was a risk the conclave itself would be prolonged.

This is an intense, reflective time. There are more than 5,000 journalists in Rome to cover the conclave — representing more than 1,000 media from 65 countries in 24 languages.

If the cardinals, having given endless interviews and press conferences, now feel the need to draw the curtain round their deliberations, who should be surprised?

1 Response to The cardinals have decided not to speak. They have not been ‘muzzled’