Posted on April 18, 2013 by catholicvoicesmedia

The French Government’s decision to speed up the legislation of same-sex marriage to avoid further public disturbances has been sharply criticised by the Archbishop of Paris, who is warning that the measure could lead to violence (See Reuters report here). 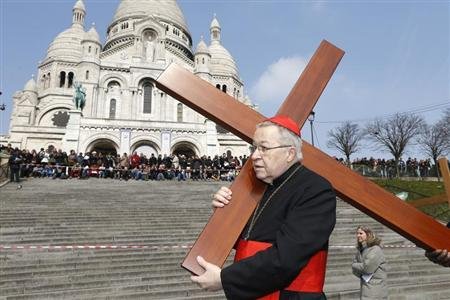 The final vote on the “Marriage for All” Bill was due to take place in May following its approval in the National Assembly and the Senate.  But the vote has now been brought forward to 23 April, and the time allocated for the debate cut in half, ostensibly in response to rising social tensions over the issue. organised by The grassroots anti-gay marriage Manif Pour Tous movement, whose  demonstration on 24 March saw hundreds of thousands of people on the streets of Paris in opposition to the Bill, is calling a new rally this weekend. 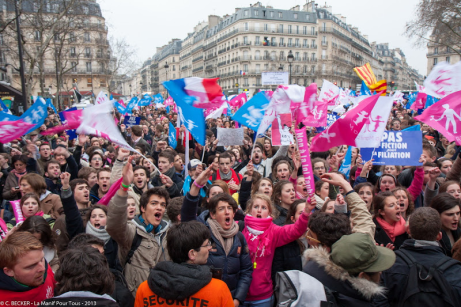 Cardinal Andre Vingt-Trois told a meeting of French bishops on Tuesday that the Government was ignoring indications that the measure will further polarise French society and endanger social peace.

By insisting that there is no difference between the sexes — “the one difference which is beyond question” — the state was forcing those who believed in this basic truth to express it in ever more strident terms. “This is the way a violent society develops,” the cardinal warned.

The cardinal’s address to the bishops (in French) is here. The remarks related to gay marriage (our translation) follow:

There have been intense debates these past months over plans to introduce same-sex marriage, which have created predictable divisions and polarisations. These fractures precisely point to the shift in cultural references.  The obvious signs are the organised and militant invasion of gender theory, especially in schools and universities, or, more simply, the tendency to deny all difference between the sexes. It is refusing difference as a way for people to define themselves, particularly in respect of sexual differences; it’s about being unable to admit that people are different, that people are not identical. They are not identical either in their sexual identity or in their personality; the purpose of society is first and foremost to ensure that people who are not the same are able to live together, and to address differences between individuals in a way that is peaceful rather than violent.

But if identity differences in social relations are swept away, the result is that, by a psychological process with which we are all very familiar, personal expression finds itself frustrated. Suppressed frustration  inevitably spills out, sooner or later, in violence, as the only way of asserting individual identity against official uniformity. This is what generates a society of violence. We’ve already seen this in the hardening in the positions of some groups or subgroups. When society has become unable to accept the reality of sexual differences, such groups come to believe in violence as their only way of being given recognition.  Our society has lost its capacity for integration, and above of all, its capacity to blend differences in a common project.

In my view, same-sex marriage legislation is a part of that trend, and will accentuate it by insisting on the lack of sexual difference  – the one difference which is beyond question.  The result will be as I just mentioned : the psychological reality of sexual differences will be pushed underground, and will be expressed in increasingly stringent terms. This simple line of explanation continues to elude a great many of the wise minds around us,  precisely when they should be thinking about preserving social peace for the next few years. That everything has been done to avoid a public debate about same-sex marriage, outside and inside Parliament, says a lot about the discomfort felt by the proponents of the bill.  Pushing the bill through can make things easy for a while. But it does not solve any of the real problems that will need to be tackled anyway. At a time when momentous economic and social decisions have to be taken, and to avoid paralyzing the country in a political deadlock, it would have been simpler, and wiser not to pursue the legislation at all.

This blog offers comments on news stories as they relate to the Catholic Church. For more information on Catholic Voices visit www.catholicvoices.org.uk
View all posts by catholicvoicesmedia →
This entry was posted in France, gay marriage and tagged France, french bishops, Gay marriage, same sex marriage. Bookmark the permalink.