Posted on June 14, 2013 by catholicvoicesmedia

Being a joint voice for the poor, standing firm in defence of life and marriage, and helping to bring peace to the world through greater unity — these are the areas which Pope Francis identified today as areas of possible future Catholic-Anglican witness in his first meeting with the Archbishop of Canterbury, Justin Welby.

The two church leaders, elected within weeks of each other, sat and talked for half an hour in the Pope’s library with the aid of an interpreter,  prayed together in the Redemptoris Mater Chapel in the Apostolic Palace, and ate lunch with each other in the papal residence together with their respective delegations.

Later, at the English College in Rome, where Archbishop Welby was a guest,  Archbishop Vincent Nichols of Westminster told journalists that the tone of the meeting had been “very personal, very direct and very creative”.

“It was a personal visit,” Archbishop Welby said at the same press briefing. “And the private conversation with Pope Francis was very personal indeed … a very private discussion about the nature of our faith and of our spirituality of prayer, of the experience of the grace and mercy and love of God”.

He added: “We also touched on other subjects to do with international issues where we looked for ways in which the Churches can develop cooperation and demonstrate our affection for each other, which is a real affection at a very deep level”.

Pope Francis thanked Archbishop Welby for praying for him at the Archbishop’s inauguration; stressed the “firm bonds of friendship” between the Churches despite sometimes rocky moments in their theological dialogue; thanked the Church of England for its understanding response to the creation of the Ordinariate (which allows Anglicans to become full Catholics while safeguarding their traditions, and with their own authority structure); and spoke of “our daily efforts to grow towards unity, which are concretely expressed in our cooperation in various areas of daily life.”

Particularly important among these is our witness to the reference to God and the promotion of Christian values in a world that seems at times to call into question some of the foundations of society, such as respect for the sacredness of human life or the importance of the institution of the family built on marriage, a value that you yourself have had occasion to recall recently.

Then there is the effort to achieve greater social justice, to build an economic system that is at the service of man and promotes the common good. Among our tasks as witnesses to the love of Christ is that of giving a voice to the cry of the poor, so that they are not abandoned to the laws of an economy that seems at times to treat people as mere consumers.

Referring to the conflict in Syria, he said: “we Christians bring peace and grace as a treasure to be offered to the world, but these gifts can bear fruit only when Christians live and work together in harmony.” Such unity, he added, “makes it easier to to contribute to building relations of respect and peaceful coexistence with those who belong to other religious traditions, and with non-believers”. 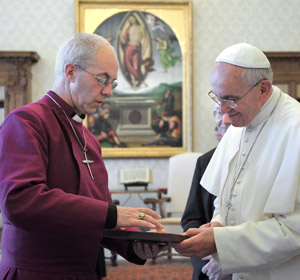 Having for many years found inspiration in the great corpus of Catholic social teaching, and worked on its implications with Catholic groups; having spent retreats in new orders of the Church in France, and being accompanied by the Prior of another new order; I do indeed feel that I am (in the words of Pope Paul VI to Archbishop Michael [Ramsey]) coming to a place where I can feel myself at home.

Noting the many obstacles in the path to reconciliation of the two Churches, Archbishop Welby said that “a firm foundation of friendship will enable us to be hopeful in speaking to one another about those differences, to bear one another’s burdens, and to be open to sharing the discernment of a way forward that is faithful to the mind of Christ pressed upon us as disciples.”

That way forward must reflect the self-giving love of Christ, our bearing of his Cross, and our dying to ourselves so as to live with Christ, which will show itself in hospitality and love for the poor. We must love those who seek to oppose us, and love above all those tossed aside—even whole nations—by the present crises around the world. Also, even as we speak, our brothers and sisters in Christ suffer terribly from violence, oppression and war, from bad government and unjust economic systems. If we are not their advocates in the name of Christ, who will be?

At the press conference, Archbishop Welby said he and the Pope “are absolutely at one on the issues” of marriage (the Pope told him that he had read his Lords speech opposing same-sex marriage) and “equally at one in the condemnation of homophobic behaviour”.

They were also at one in “our sense that the essential dignity of the human being is where you start, and that is one of the absolute root foundations of all behaviour, and the moment you start treating people as a category rather than as human beings with this essential dignity you have begun to lose the plot”.

Asked what personal impression he had gained of Pope Francis during this visit, Archbishop Welby described him as “an extraordinary humanity, on fire with the Spirit of Christ.”

The meeting is the first of many — Archbishop Welby will be returning to see the Pope in December — and therefore the beginning of an important relationship. The meeting set out common ground for their common witness  (the possibility of a joint communiqué on human trafficking, for example, was discussed) and their strong agreement on a wide range of issues (social justice, sexuality, life, marriage) suggests that this could well become more common.

Neither glossed over the fact that the path to institutional unity was now all but blocked, but both pointed to that joint witness as the means of deepening the ecumenical relationship.

The encounter allowed the two leaders also to move on from the ill feeling caused in Anglican circles by the way the Ordinariate was created without prior consultation with Lambeth. (There were various operational and confidentiality reasons why neither the Catholic bishops in England and Wales nor the Anglican Church were brought into the process). Pope Francis also cast the Ordinariate, as did Pope Benedict, as a means of furthering institutional unity, enabling “the spiritual, liturgical and pastoral traditions that form the Anglican patrimony to be better known and appreciated in the Catholic world.”

Lastly, both leaders kept their eyes firmly on the true source of any present and future unity: “Jesus Christ as our constant point of reference” (Pope Francis), “the discernment of a way forward that is faithful to the mind of Christ pressed upon us as disciples” (Archbishop Welby).