Posted on July 1, 2013 by catholicvoicesmedia

Two landmark judgments by the US Supreme Court on 26 June have removed major potential obstacles to the increasing adoption by US states of gay marriage laws. One cleared the way for federal recognition of legally married same-sex couples; the other gave an opening to California that allowed it to resume such unions there.  (Catholic Voices USA coordinator Kathryn Lopez reflects on the judgments here.) 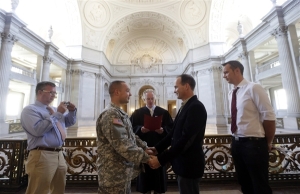 No one doubts the significance of the decisions, which, as the Washington Post reports, have effectively ensured a “pitched political battle” over the issue for the next decade. Gay rights groups now believe that a Supreme Court ruling like Roe v. Wade, which would give a constitutional right to same-sex marriage, is within reach. But that is not what happened last week. Analysis is by our legal expert, Peter Smith.

Last week’s judgments will help to shape not only the complicated interplay between federal and state government and the role of popular referendums in the democratic process, but also the American attitude to the institution of marriage.

United States v Windsor concerned two women married in Canadian law in 2007 after a relationship of over 40 years. In 2009, Windsor’s partner died and, as the couple lived in New York state, their estate became liable for about $363,000 federal inheritance taxes. New York recognised same-sex marriages performed in other jurisdictions, and had Windsor been subject solely to state law she would have qualified for an unlimited spousal deduction. But under Section 3 of the Defence of Marriage Act (DOMA), a federal act, the concept of “spouse” could only mean a marriage between opposite-sex couples. A classic conflict between rights under state law and obligations under federal law ensued.

The second judgment was in Hollingsworth v Perry. In 2008, the state of California voted in a ballot initiative, Proposition 8, to bar same-sex marriage and to refuse to recognise marriage other than between a man and a woman. ‘Prop 8’ was immediately challenged in state and federal courts on the grounds that it violated both the Constitutions of California and of the United States. Although Wednesday’s judgment turned on a technicality (whether, as the State of California was no longer willing to defend Prop 8, other intervening parties had standing to do so), in the popular imagination the question was whether state citizens could decide for themselves the meaning of marriage through the ballot box.

The decisions in both Windsor and Hollingworth  cover many interacting legal principles. To add to the confusion, there was almost nobody in authority who was willing and able to defend conventional marriage in the courts.

In Hollingsworth then-Governor Schwarzenegger declined to oppose the challenge to Prop 8’s constitutionality, and it was left to a state senator and pro-marriage campaign group to oppose a couple, Kristin Perry and Sandra Stier, who had been denied a marriage licence. The case was thus decided on who had the authority to support Prop 8 in the courts. It was found, as a technical matter of law, that its supporters did not. “As this Court has repeatedly held, such a “generalized grievance” [held by the supporters of Prop 8] – no matter how sincere – is insufficient to confer standing”. The decision of a lower court against Prop 8 was allowed to stand.

In Windsor the supporters of DOMA were undermined drastically by the Department of Justice’s unwillingness to fight. Although the original Act was a Republican measure in Congress, it was supported by the Democrat government of President Clinton. President Obama ordered his Attorney-General to reduce the defence of the Act as far as possible, despite the DoJ’s obligation to defend a Congressional Act.

The Court in Windsor split 5-4, with the four known liberals and four known conservatives on either side with Justice Kennedy, a Reagan-era appointee known for his essentially libertarian views, authoring the opinion of the majority. In the judgment of the majority,

DOMA’s principal effect is to identify a subset of state-sanctioned marriages and make them unequal. The principal purpose is to impose inequality, not for other reasons like government efficiency… DOMA undermines both the public and private significance of state-sanctioned same-sex marriages; for it tells those couples, and all the world, that their otherwise valid marriages are unworthy of federal recognition. This places same-sex couples in an unstable position of being in a second-tier marriage…. The federal statute is invalid, for no legitimate purpose overcomes the purpose and effect to disparage and to injure those whom the State, by its marriage laws, sought to protect in personhood and dignity.

As a consequence, the definition of “couple” in DOMA was found to be in breach of the ‘due process’ notion in the Fifth Amendment: the federal government had deprived a citizen of property without balancing all the competing interests that case law demands the government to take into account. 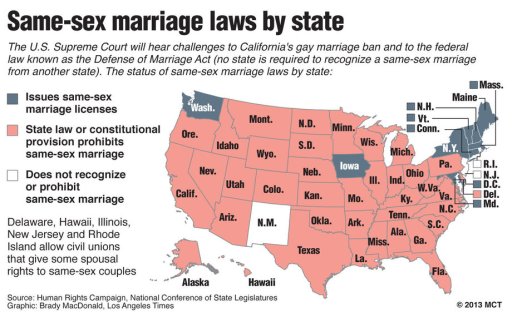 Ryan T Anderson, author of What Is Marriage?, points out that the Windsor decision is not, in fact, a victory for  same-sex marriage proponents. It leaves section 3 of DOMA intact, preventing states from being forced to recognise same-sex marriages created under the laws of other states, and serves to cloud already-turbid waters further. Says Anderson:

It is hard to criticise the basis of the DOMA case because it is hard even to say what that basis is. The opinion begins with a learned reflection on how family law has historically (but not exclusively) been left to states. After all, DOMA leaves state family law intact as ever. It controls only how the federal government allocates federal money and benefits when it comes to marriage. Congress can’t impose on the states in this matter, to be sure; but then why would the states be able to impose on Congress? 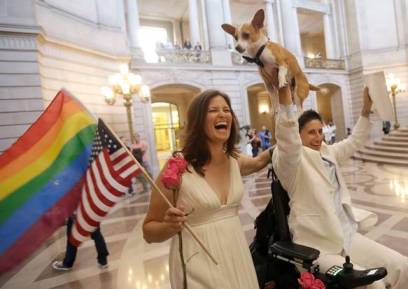 Lesbians celebrating their San Francisco City Hall wedding on Friday with one of the witnesses: their dog Punum.

One of the problems with DOMA is that no matter how strongly its advocates argued that it was a pro-marriage Act, it was always open to characterisation as being an anti-gay measure. Against Kennedy’s characterisation of DOMA (excerpted above), Anderson writes:

The effect of this refusal to engage counterarguments is the elevation of a rash accusation to the dignity of a legal principle: Doma’s supporters — including, one supposes, 342 representatives, 85 senators, and President Clinton – must have been motivated by ill will.

The leading spokeswoman for Prop 8, speaking on the steps of the Supreme Court, challenged Prop 8’s opponents to accept the will of the people of California. As Anderson noted, the failure of the Californian state government to defend a democratic measure passed by its citizens is a travesty of representative politics. It also meant that the opponents of Prop 8 did not get the judgment they wanted either.

While the government of California through its inaction has tried to silence the voices of Californians, the Court has not created a right to the redefinition of marriage. Marriage laws in the states that tell the truth about marriage – that it is a union of one man and one woman to provide children with a mom and a dad – have not been struck down.

Unlike the infamous Supreme Court ruling on abortion in the 1970s, Roe v Wade, the judges did not “discover” a constitutional right to same-sex marriage. States are already moving to pass their own mini-DOMAS, echoing the language of Prop 8, to amend state constitutions so that they reflect the truth about marriage as being between a man and a woman, as the institution which produces, protects and nurtures children.

It is troubling that neither the federal nor state government saw fit to defend very recent legislative and popular actions in defence of opposite-sex marriage. But the space is left wide open for the struggle in defence of the rights of children to both a mother and a father to continue.

This blog offers comments on news stories as they relate to the Catholic Church. For more information on Catholic Voices visit www.catholicvoices.org.uk
View all posts by catholicvoicesmedia →
This entry was posted in Uncategorized and tagged Gay marriage. Bookmark the permalink.