Pope Francis: celibacy is about ‘big love’ & should lead to joy

Posted on July 11, 2013 by catholicvoicesmedia

Pope Francis last Saturday unexpectedly addressed 6,000 pilgrims visiting Rome who were exploring or have recently embraced a vocation. Among them was Laura Keynes, who will be training as a CV speaker in the Autumn (see her article here). She writes:

We weren’t told of the meeting until 12 hours beforehand. When Pope Francis had heard about the ‘Year of Faith Pilgrimage to the Tomb of Peter for novices, seminarians, and those on a vocational journey’ he said he wanted to speak to them. As it turned out, the address in the Paul VI Hall on 6 July coincided with the release of his first encyclical, Lumen Fidei, which he urged us to read. 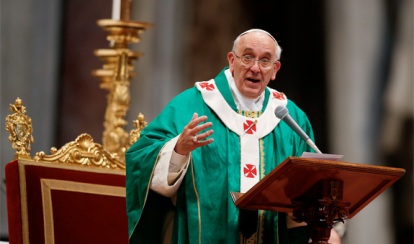 The Pope spoke about the importance of the consecrated life in “a culture of the provisional, the temporary”, and also of the joy to be found in a life at the service of others — “a joy from the Holy Spirit, not from the world.” He had strong words for religious who covet worldly things: “Truly it hurts me when I see a priest or sister with a luxury car, the latest model of car, it makes me sad,” he said. “We have to go on bicycle. Well, ok, a car is necessary for our work, but take one that’s humble. If you want a more beautiful one, think of the many people who are dying of hunger.”

This emphasis on humility and poverty is already a familiar theme from Pope Francis, who is addressing one part of the world transfixed by the latest fashions, entertainments and possessions, and another part deprived of basic necessities.

To the young men and women in the audience considering a vow of poverty in service to the Church he said:

True joy doesn’t come from having things. It’s born from an encounter. A meeting with others. Joy comes from a meeting, from feeling oneself accepted, understood and loved. And from understanding and loving. And this is not just for a moment but because the other is a person. It comes from hearing someone say ‘You are important for me’. It’s really what God helps us to understand. In the calling of God, He is saying ‘You are important to me, I am counting on you.’

He repeated his wish for a more missionary church: “I would like to have a Church that is more missionary, not so tranquil. Go and be able to encounter people, especially those who are most despised, most unfortunate. Don’t be afraid to go against the current: be contemplative missionaries,” he told us, before sharply criticising those not living their vocations honestly.

He recommended confession to guard against hypocrisy:

Be transparent with your confessor. Always say everything, don’t be afraid. It is so sad when I see seminarians or sisters confessing with this person, and he goes to this person, that person, a different person – they become a pilgrim between confessors so as to hide the truth. I’m telling you this from my personal experience. I have found many consecrated people who fall into this trap of hypocrisy because of the lack of transparency.

“When you see a seminarian or novice too serious, too sad, you think to yourself ‘Something’s not right here’,” he added. “It means the joy of the Lord is missing, the joy that leads to service. You never want to see a priest or sister with a sour face.”

Reflecting on what might be the cause of this sourness he added: “It’s usually a problem of dissatisfaction. It’s a problem of celibacy.”

Pope Francis went on to explain what chastity is and is for.

To consecrate your love to Jesus, it’s a big love, and it takes us to the vow of chastity. The vow of celibacy doesn’t stop in the moment you take it, it carries on – matura matura matura – maturing gradually into pastoral paternity, a pastoral maternity. When a priest isn’t a father in his community and a sister isn’t a mother to those she works with, they become sad, and that’s the problem. So I say to you that the root of sadness in consecrated life is the lack of paternity and maternity – and the lack leads one to live badly a consecration which is supposed to lead us to be fruitful. You can’t conceive of a priest or sister who is not fruitful – it’s a contradiction! The beauty of consecration is joy.

In speaking about the joy of consecrated life Pope Francis insisted upon the beauty of a life lived in service. “Go beyond yourselves,” he said. “Go ahead with joy, and with courage to tell the truth. And the courage to go out of yourselves to be able to announce the Gospel with pastoral fruitfulness, so you don’t become dried out spinsters.”

At a time when consecrated life is deeply misunderstood as something that thwarts healthy psychological growth, and in a culture where a life lived in celibacy is seen as some kind of spinsterhood, these are important words, testifying to the freedom celibacy affords in allowing a greater degree of service to the other: its ultimate goal is the common good.

This message of the joy to be found in religious life deserves to be better known.

The full text is here, here, and here.

1 Response to Pope Francis: celibacy is about ‘big love’ & should lead to joy