While social media spread the benefits of pilgrimage, you can’t confess on Twitter

Posted on July 18, 2013 by catholicvoicesmedia

Recent stories concerning the spiritual benefits of following World Youth Day on Twitter bring together what seem to be bizarrely incompatible themes in ways that are journalistically irresistible.

The apparently unlikely marriage of the latest technology and indulgences — inevitably framed as ‘medieval’ — lies behind many of these stories.

But quite a lot of the truth has been lost in the delight of their telling.

The reports follow an announcement from Rome Tuesday that the Apostolic Penitentiary – a tribunal of the Roman Curia primarily responsible for issues relating to the forgiveness of sins – has issued a decree granting Indulgences to participants at World Youth Day, which begins next week in Rio de Janeiro.

Indulgences, which have long been granted to people on pilgrimage, can also be gained – the statement clarified — by those who cannot make it to Rio if they follow the events by radio, television or “the new means of social communications”.

But it is not enough to tune or log in — or even to attend a papal event in Rio  — to gain what the Church has traditionally understood to be remission for the temporal punishments associated with sin. To gain a plenary indulgence, one must also make a sacramental Confession, receive the Holy Eucharist in Communion, and pray for the intentions of the Holy Father.

Sins are forgiven by making a sacramental Confession, in person, in the normal way — and there is nothing about following Twitter (or YouTube, or Facebook) that automatically enables anything. You can’t go to Confession on Twitter. And the disposition of the heart still matters.

“The word indulgence is not very familiar to many people today, especially to the younger generation,” says Mgr John Kennedy, an official at the Vatican’s Congregation for the Doctrine of the Faith. “The Christian meaning of the word indulgence really comes from Latin indulgentia and it means kindness or tenderness, and refers, in this context to God’s kindness in forgiving the effects of sins.”

Indulgences, Mgr Kennedy adds, “are linked to a theme that Pope Francis has spoken very frequently about since the moment of his election – that is to say, to the gift of God’s mercy.”

God forgives, unconditionally, those who are penitent and seek forgiveness through Confession. But the effects of the sin linger; and conversion is an ongoing process. That’s what is meant by the rather forbidding term ‘temporal penalties’.

What the Church recognises, in its doctrine of indulgences, is that giving up time and comforts and security to go on pilgrimage is an act of generosity that God responds to, which assists that ongoing conversion — and therefore reduces those penalties.

What’s new is that social media — and especially the TV broadcasts over the internet of the events next week in Rio — offer new opportunities for taking part in the pilgrimage without actually being there, and of reaping the spiritual benefits. 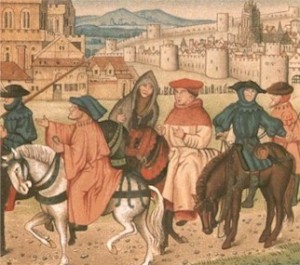 No doubt the family of a medieval pilgrim, staying at home to tend the crops while the relative walked across northern Spain to worship at the shrine of St James, would have reaped the same benefits by accompanying the pilgrim in prayer.

But nowadays — with popes flying in, low-cost airlines, and the internet — that act of spiritual imagination just got a whole lot easier.

1 Response to While social media spread the benefits of pilgrimage, you can’t confess on Twitter