Postcard from Rio 2: Francis arrives in a Latin whirl of drama and joy

Posted on July 23, 2013 by catholicvoicesmedia

I’ve covered enough papal trips under Pope John Paul II and Benedict XVI to be familiar with the routine. As the press centre fills, the first reports filter out of the Pope’s remarks to journalists accompanying him on the plane. The familiar Alitalia A330 touches down on the airport tarmac flying the Vatican and local flags from its cockpit; state officals and bishops form a welcoming committee; the pope emerges, is greeted, is whisked away in a limousine to the city centre, where he climbs into the popemobile for a tour of streets lined with well-wishers. Then comes the welcoming ceremony in which the president or prime minister addresses him, and he gives a speech in response.

Soon after the press centre fills with Italian voices and veteran journalists as the dozens of VAMPS –journalists working for the major agencies, permanently accredited to the Holy See Press Office, who sit at the back of the papal plane – arrive. Fr Lombardi, the Vatican spokesman, breaks away from the papal entourage to give a briefing to the press corps that helps shape the first stories.

True to form, all of this happened yesterday. Yet Pope Francis’ arrival in Rio de Janeiro – just before the royal baby — managed to be strikingly 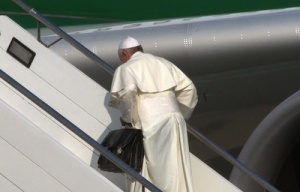 different from what we have been used to in papal trips. Once he was in the air – after carrying his own bag onto the plane — he rejected the usual interview with pre-prepared questions in order to meet the reporters one by one, asking them about their families, getting to know them, and telling them, jokingly, that journalists are not the saints he is most devoted to. In a flight in which, according to Fr Lombardi later, he remained permanently active  –“this pope has an extraordinary energy” – he also visited the cockpit for 15 minutes to chat with the pilots shortly before landing.

But he still gave them their story, making some important criticisms of a throwaway culture in which the jobless young and set aside. “The world crisis is not treating young people well ,” he said. “We are running the risk of having a generation that does not work. From work comes a person’s dignity.”

to the city, waving through an open window. Then came extraordinary scenes in which he appeared to get stuck in rush-hour traffic (it turned out later that his driver had taken a wrong turn); at one point the car was stuck, and well-wishers flooded round, passing messages and babies through the window. The Pope’s secretary, it later transpired, had his heart in his mouth – but Francis was enjoying it.

“For those of us in the entourage, the impression was one of extraordinary enthusiasm”, said Fr Lombardi.

Some of the journalists seemed exasperated at this. But surely this was a major breach of security? Surely anything could have happened?

But Fr Lombardi gave one of his genial shrugs and said this was something that we had to get used to – a Pope happy to be “with the people”. It had happened before only recently in Lampedusa, the island Francis had visited to draw attention to the plight of African migrants, where after his car had also got stuck in traffic he was also mobbed by those wanting to be close to the Successor of St Peter.

Once he reached Rio’s cathedral he climbed into an open popemobile and the atmosphere in the press office visibly relaxed. His tour of Rio’s streets, thronged with pilgrims and well-wishers, was, to no-one’s surprise, a chance to connect with what he later called his “beloved Latin America”. Brazilians, famous for their exuberance in everything,  gave him an extravagant welcome.

But Brazil’s problems and violence are never far away. In a change to the schedule, the Pope was driven to Rio’s domestic airport in order to take a helicopter to Guanabara Palace for the official welcome. The helicopter was to avoid the violence of the protesters outside, who had nothing against him but were using the visit to call attention to their demands. Later the protest turned into a riot, with dozens arrested.

It is the juxtaposition of protests that often turn violent and Pope Francis’s desire to be “close to the people” that make this visit a nightmare for Brazilian security, and have injected a whole new element of drama to a papal visit.

But while he will take the necessary precautions, Francis wants to steer clear of what Fr Lombardi later called the “militarisation” of security, which would only reinforce the Pope’s remoteness – -the very opposite of his message to the Church.

An unresolved challenge, however, is how to reconcile his clear desire to receive the love and welcome of the people with his abhorrence of “papolatry”. Put another way, can he shift the attention on him to where he believes it should be — on Christ?

He’s already exhibited one obvious way of doing that: fulsome gratitude. Brazilian news sites are today full of the papal tweet humbly thanking cariocas —  Rio dwellers — for the warm of their welcome.

Pope Francis began his first address at Guanabara Palace, seat of the state governor of Rio de Janeiro, with a characteristically warm and humble thanks for his welcome, expressing joy at returning to his “beloved Latin America” on his first foreign visit, and asking “permission to come and spend this week with you”.

“I have neither silver nor gold,” he said, “but I bring with me the most precious thing given to me: Jesus Christ!”

During the speech, in which he responded to one by President Dilma Rousseff seeking to identify her government’s concerns with his, he reaffirmed his desire to meet with “young people coming from all over the world, drawn to the open arms of Christ the Redeemer”. He expressed his confidence in young people, noting that “there is no force more powerful than the one released from the hearts of young people when they have been conquered by the experience of friendship with Him”.

“Christ has confidence in young people and entrusts them with the very future of his mission, ‘Go and make disciples’,” he said, adding a call to “go beyond the confines of what is humanly possible and create a world of brothers and sisters!”

Because young people “are the window through which the future enters the world”, this meant confronting many challenges to society, Pope Francis went on, before listing what is effectively a policy agenda for any society wanting to invest in the next generation.

Our generation will show that it can realise the promise found in every young person when we know how to give them space; how to create the material and spiritual conditions for their full development; how to give them a solid basis on which to build their lives; how to guarantee their safety and their education to be everything they can be; how to pass on to them lasting values that make life worth living; how to give them a transcendent horizon for their thirst for authentic happiness and their creativity for the good; how to give them the legacy of a world worthy of human life; and how to awaken in them their greatest potential as builders of their own destiny, sharing responsibility for the future of everyone.

Every pope needs to put a distinctive stamp on World Youth Days. Pope Francis’s, Fr Lombardi made clear at last night’s press briefing, was to include the elderly – a theme which he previewed recently in an address at the Basilica of St Mary Major in Rome two days before leaving for Rio.  In his five-minute overview for reporters on the papal plane, Francis said he wants to reach out to youth on this trip but as part of the broader “social fabric.” In particular, he said, he wanted to emphasize concern for elderly people, too, who just as often fall victim to a “throw-away culture”.

“Many times, I think we do an injustice to the elderly by setting them aside,” Francis said, “as if they don’t have anything to give us. But they can give us the wisdom of life, the wisdom of the past, the wisdom of our country and our family. We need this.”

“So, I’m going [to Brazil] to meet the youth, yes, but within their social fabric, principally with the elderly,” he said.

What might a future World Youth Day – which is in reality a five-day series of events culminating in a massive papal Mass — that “includes the elderly” look like? John Allen considers three possibilities: the young visiting the old during the week; the young collecting testimonies of older people to learn from them; and the old being asked to give catechesis sessions alongside, or instead of, bishops.

Today is a rest day for Pope Francis – which means, as one wag here puts it, “stay tuned”. This afternoon WYD itself opens with a welcoming Mass on Copacabana beach celebrated by Rio’s archbishop, Dom Orani Tempesta. Tomorrow Pope Francis will used the second rest day in Benedict XVI’s original schedule to visit the Shrine of Aparecida, where Latin America’s bishops gathered in 2007 to discern the future programme of the Church in Latin America.

1 Response to Postcard from Rio 2: Francis arrives in a Latin whirl of drama and joy