Postcard from Rio 4: Francis in Aparecida lays out attitudes necessary for mission

Posted on July 24, 2013 by catholicvoicesmedia 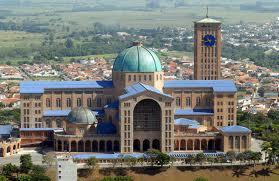 Celebrating his first public Mass in Brazil, Pope Francis today went to the Basilica of Our Lady of Aparecida, a remote spot 150 miles south of Rio de Janeiro where in 1717 a statue of Our Lady turned up the in the nets of three fishermen from nearby Guaratinguetá who had prayed to Our Lady of Immaculate Conception for a good catch.

Once she was cleaned up, they saw she was, indeed, the Immaculate Conception: hence the same Nossa Senhora da Conceição Aparecida, ‘Our Lady of the Appeared Conception’.

The Patroness of Brazil is now the centrepoint of a vast Basilica – second in size only to St Peter’s in Rome – which draws 12m pilgrims a year. For Pope Francis

it has another special significance, as the place where the Latin-American bishops gathered in May 2007 to discern the Church’s programme for the continent. He was responsible for the redaction of the Conference’s final message, known as the Document of Aparecida, which many see as effectively the Pope’s own programme: the importance of a renewed encounter with Jesus for every Christian; the need for Gospel simplicity and humility; a preferential option for the poor; a concern for the environment, and the need for prayer and cultural devotions. All these elements, according to the document, are necessary for a credible evangelisation in the modern world.

The document also calls for the Church to reflect in humility on the ways in which its words or actions reduce its credibility in witnessing to God in today’s world – gloomy faces, for example, or a refusal to share the lives of the poor.

Presenting him with a replica of the statue, the Archbishop of Aparecida, Cardinal Raymundo Damasceno Assis, told him she was dark because of the mud from the river and the smoke of candles over the years. But her colour, he said, “has been interpreted as a reference to the suffering of the poor and marginalized, especially that of black people, throughout the history of Brazil”.

“Whoever would have thought,” said Pope Francis in his homily, “that the site of a failed fishing expedition would become the new place where all Brazilians can feel that they are children of one mother?”

The phrase echoed the Document of Aparecida, which sees Marian devotion as crucial to binding together an increasingly diverse and globalised people. The great gift of Marian devotion, the document says, “has been able to merge different Latin American histories into a shared history: one that leads to Christ.”

(As an aside, the Pope’s Marian devotion runs deep. After he was made bishop, he distributed prayer cards of an obscure German image of Our Lady which showed her patiently untying knots in which angels are trapped.  Over time, a devotion grew up, and a copy was made of the image, which is now in a parish church in Buenos Aires. Our Lady, Untyer of Knots  — María Desatanudos as she is known in Argentina —  attracts 10,000 people every weekend.)

The Basilica was packed to capacity – 12,000 – with a crowd of some 200,000 outside, many of whom had slept there in the hope of seeing the Pope, despite the inclement weather. A cold front has brought some of the lowest temperatures on record here, along with wind and rain, forcing the Pope to fly most of the way by plane, and then by helicopter to the shrine itself. Once there, he boarded the popemobile and was driven through the roaring crowds to the Basilica.

Francis’ homily was in the style we have come to expect: a concise but warm three-point meditation on the “attitudes” of a Christian: hopefulness, openness to being surprised by God, and living in joy. He showed himself, again, to be the “world’s parish priest” – a pastor with a message he wants to share, delivered directly and simply.

But it hit hard. In our efforts to evangelise, or maintain the faith in our families, he said,

Always know in your heart that God is by your side; he never abandons you! Let us never lose hope! Let us never allow it to die in our hearts! The “dragon”, evil, is present in our history, but it does not have the upper hand. The one with the upper hand is God, and God is our hope! It is true that nowadays, to some extent, everyone, including our young people, feels attracted by the many idols which take the place of God and appear to offer hope: money, success, power, pleasure. Often a growing sense of loneliness and emptiness in the hearts of many people leads them to seek satisfaction in these ephemeral idols. Dear brothers and sisters, let us be lights of hope! Let us maintain a positive outlook on reality. Let us encourage the generosity which is typical of the young and help them to work actively in building a better world. Young people are a powerful engine for the Church and for society. They do not need material things alone; also and above all, they need to have held up to them those non- material values which are the spiritual heart of a people, the memory of a people. In this Shrine, which is part of the memory of Brazil, we can almost read those values: spirituality, generosity, solidarity, perseverance, fraternity, joy; they are values whose deepest root is in the Christian faith.

And he issued a strong challenge to pessimists, echoing his words to seminarians and religious novices in early July when he warned them not to be “too serious, too sad,” because “there is no sadness in holiness.”

Dear friends, if we walk in hope, allowing ourselves to be surprised by the new wine which Jesus offers us, we have joy in our hearts and we cannot fail to be witnesses of this joy. Christians are joyful, they are never gloomy. God is at our side. We have a Mother who always intercedes for the life of her children, for us, as Queen Esther did in the first reading (cf Est 5:3). Jesus has shown us that the face of God is that of a loving Father. Sin and death have been defeated. Christians cannot be pessimists! They do not look like someone in constant mourning. If we are truly in love with Christ and if we sense how much he loves us, our heart will “light up” with a joy that spreads to everyone around us.

At the start of the homily, pope Francis described the 2007 meeting in Aparecida as a “great moment of Church”. The Document which resulted, he said, was born of “the interplay between the labours of the bishops and the simple faith of the pilgrims, under Mary’s maternal protection”.

Thus are emerging the key themes in Francis’s attempt to prepare a more missionary Church: an attitude of hope and joy, a closeness to the poor, and a reliance on Mary.

This afternoon’s visit to the hospital of St Francis, where he will open a wing for drug addicts, and tomorrow’s visit to the favela of Varguinhas, will allow him to demonstrate – visibly, and in person – what it means to be close to the poor, while tomorrow afternoon’s greeting to the WYD pilgrims, his first “meeting” with them, will allow him to build a relationship with the young prior to guiding them in the direction of missionary commitment.

Today he demonstrated his great capacity for spontaneous contact.

At the end of Mass – as he left the Basilica, accompanied by many “vivas” – he came out on the balcony to bless the pilgrims outside.

As he greeted them in Portuguese – irmãos e irmãs! (brothers and sisters!) he was drowned out by the crowd calling out, “Francisco! Francisco!” Beaming, he told them he did not speak “Brazilian” and would address them instead in Spanish.

“Thank you for being here,” he told them. (The Pope usually begins by thanking people for their fervour. He never expects it.)

“I ask the Virgin to bless your families, your children, your parents, and the whole nation”, he added. Then he said he would find out if they understood him. “Does a mother forget her children?” he asked.

Receiving the answer, “no!” he said: “No! A mother does not forget her children, she takes care of them”.

He then blessed them with the replica of an image of the Virgin before asking them to pray for him (“I need it!”, he told them) before promising to return in 2017 – the 300th anniversary of the apparition of Our Lady of Aparecida.

1 Response to Postcard from Rio 4: Francis in Aparecida lays out attitudes necessary for mission