Postcard from Rio 5: Francis among the addicts

Posted on July 25, 2013 by catholicvoicesmedia

Drugs are one of Latin America’s greatest social scourges: they destroy the lives of addicts, corrupt public authorities, and in many cases – Mexico being the most obvious example – pose a threat even to the state itself. 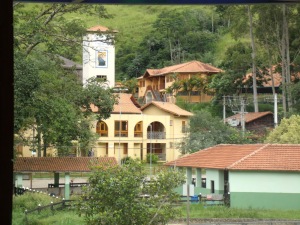 Of all civil-society institutions, the Catholic Church in Latin America is by far the most important in confronting the challenges. It pioneers some of the best addict rehabilitation in the world through what are known here as ‘Therapeutic Communities’. I visited one in Brazil in May 2007, the Fazenda da Esperança (Hope Farm) in Guaratinguetá, while covering Pope Benedict’s visit there before he went on to open the Aparecida meeting, and came away deeply impressed.

The Fazenda was huge, set in beautiful country, and structured around a timetable reminiscent of that of a primitive monastic community: regular prayer, farm work, simple but nourishing food, and plenty of love, along with job skills. The stories of the young people there are deeply moving: they spend a year or two, or sometimes more, until they are ready to move on with their lives; sometimes – but it’s rare – they fall back into addiction, and return: the doors are always open.

The success rates of the Therapeutic Communities are far higher than what in Europe we call ‘rehab clinics’ because they heal the person, rather than just the addiction. (On a much smaller scale, the Cenacolo communities in Europe – there are a couple in the UK – operate on a similar model). There are major studies under way that aim to analyse and quantify the success of these Centres, that will hopefully allow the lessons one of the Latin-America’s most successful Catholic projects to be better known elsewhere.

Pope Francis’ visit yesterday to the St Francis hospital here in Rio, in order to open a wing dedicated, among things, to the recovery of drug addicts – the wing has been paid for by the Italian bishops’ conference – was a moment to put the spotlight on two main aspects of the drugs question: what society can do about it, and how individuals can escape addiction.

The headlines in both Brazil’s newspapers today – ‘Pope opposes liberalisation of drugs’ – focussed on the first. Pope Francis indeed said that tackling the underlying causes through education, justice, and supporting addicts were the ways of meeting the challenges, rather than relaxing the laws; and he had strong words for the traffickers, whom he described as “dealers of death”. But most of the speech was addressed to addicts themselves, and those who walk with them.

To embrace someone is not enough, however. We must hold the hand of the one in need, of the one who has fallen into the darkness of dependency perhaps without even knowing how, and we must say to him or her: You can get up, you can stand up. It is difficult, but it is possible if you want to. Dear friends, I wish to say to each of you, but especially to all those others who have not had the courage to embark on our journey: You have to want to stand up; this is the indispensable condition! You will find an outstretched hand ready to help you, but no one is able to stand up in your place. But you are never alone! The Church and so many people are close to you.

He then used took the example of the Good Samaritan, which he said was made tangible in the hospital. “The Saint Francis Association and the Network for the Treatment of Drug Addiction show how to reach out to those in difficulty because in them we see the face of Christ, because in these persons the flesh of Christ suffers”.

As usual with Francis, the actions and the pictures spoke as loud as his words: his hugs of recovering addicts are some of the most memorable images of this trip so far.

An awful lot of water has fallen in Rio the past few days. Last night, while speaking at the VivoRio centre here close to the airport, the rain fell so hard that the staff had to put out huge bins to collect the water pouring off the canvas. Fortunately the microphones were good; together, the wind and the rain were deafening.

The talk was arranged by Alejandro Bermúdez of the Catholic News Agency (CNA) who wanted young people to hear about the Catholic Voices method. He told me, cheerfully, that the audience was bilingual – by which he meant, it turned out, that some of the 200 or so pilgrims understood only English, others only Spanish. Knowing my Castilian was good, he asked if I could speak in both.

It’s not often you get invited to be your own translator, while the wind and the rain are howling outside. As it happened, it was more than an hour of engaging Q&A with young people from all over Latin America. Having a few copies with me of How to Defend the Faith Without Raising Your Voice, I decided to award them to those who asked the most interesting questions – which led to some healthy competition, and intriguing discussions.

I found myself, in my answers, continually referring to Pope Francis as a master communicator. The more I see him here the more sure of that I’m becoming.

As I write, he has just given a wonderful off-the-cuff speech to Argentine pilgrims gathered in the Cathedral. He wanted them to remember three points; and without taking notes I can tell you now what they are.

The rain here is causing mounting anxiety about Campus Fidei, the vast field outside Rio where at least a million will gather on Saturday night and Sunday morning, having spent the night there, for the climax of WYD. At the moment it is basically mud and water, posing a severe challenge on every front. The forecast is for the rain to clear tomorrow, but few think it will have dried out by then. The question here is, how muddy does it need to be for a Plan B?

(Update: the WYD organisers have announced their Plan B. Rather than a Vigil and overnight stay at Guaratiba — Campus Fidei — the pilgrims will have the Vigil & Mass at Copacabana beach, with no overnight stay.)

Being far away from the UK, it’s hard to pay much attention to the royal baby. But asked about it last night I managed to make a connection with the Pope. For a start, I said, George is the Pope’s Christian name. And at Aparecida yesterday – using the Revelation reading for the Feast of Our Lady of Aparecida – Pope Francis referred to the dragon of sin. St George, I ventured, was the famous dragon-slayer.

So maybe the simultaneous arrival of Pope Francis in Rio and the royal baby were linked in some way after all.

1 Response to Postcard from Rio 5: Francis among the addicts