Posted on October 9, 2013 by catholicvoicesmedia

Pope Francis has convened a Synod of Bishops for October 2014 on the theme of “The Pastoral Challenges of the Family in the Context of Evangelisation.” The decision was taken at the end of a two-day meeting, attended by Francis, of the Synod’s permanent council, now led by Cardinal Lorenzo Baldisseri.

The Vatican spokesman Fr Federico Lombardi SJ said Francis was interested in looking at the “anthropological theme” that dealt with “the human person and the family in the light of the Gospel”.

But the thorny topic of the divorced and remarried being barred from the Eucharist will also be dealt with, as well as the related question of marriage annulments. The synod will also discuss pressures such as cohabitation and divorce and the state redefining marriage in the name of equality.

Synods of Bishops normally take place every three to four years in October, bringing about 300 bishops and other participants to Rome for three weeks of speeches and deliberations leading to recommendations, which the Pope usually responds to a year or so later in a document. Synods are either “ordinary” — a gathering of the universal church to focus on a particular topic (the last was October 2012, on the topic of the new evangelisation) — or “special”: a gathering of the bishops from a particular region to consider the challenges to that Church (the last of these was the Synod on the Middle East in October 2011).

But next year’s will be an “extraordinary general session” of the Synod, which according to the Code of Canon Law is held to “deal with matters which require a speedy solution.” This will be only the third “extraordinary” assembly since Pope Paul VI reinstituted synods in 1965. (The first, in 1969, dealt with the role of episcopal conferences; while the second, in 1985, was on the 20th anniversary of the Second Vatican Council, and led to the Catechism of the Catholic Church).

An extraordinary synod is shorter and smaller. The participants will be restricted to the presidents of bishops’ conferences, patriarchs, heads of the Vatican’s dicasteries, and the superiors of religious orders — about half the number of those taking part in the ordinary or special assemblies.

Pope Francis, who was relator or chair of the 20o1 synod, wants the assembly to be an instrument of effective governance of the universal Church, as opposed to its current format, which is more of an unwieldy debating chamber. Synod reform was one of the major topics discussed by the Pope’s council of cardinals (“C-8“) last week, which Cardinal Baldisseri attended.

Communion for the remarried

The Pope has also been open about wanting to tackle the difficult pastoral question of excluding the divorced and remarried from communion, telling reporters on his plane back from Rio de Janeiro in July that the next synod’s exploration of a “deeper pastoral care of marriage” would include the question of divorced and remarried Catholics. He also said church law governing marriage annulments “has to be reviewed, because ecclesiastical tribunals are not sufficient for this. It is complex, the problem of the pastoral care of marriage.”

During the October 2012 Synod of Bishops on the New Evangelisation the issue came up regularly in informal conversation, with many bishops looking for a better way of upholding the permanence of marriage while at the same time enabling those whose marriages had not lasted to feel part of the Church. A number of bishops called for the Church to find a better solution than the status quo, perhaps by increasing access to marriage annulments.

The Archbishop of Panama, José Domingo Ulloa Mendieta, for example complained that

in spite of this constant attention to the pastoral care of “irregular” families (divorced and remarried), it seems that an adequate answer to the problem has not been found and it is a frequent source of evident dissatisfaction for the faithful who experience situations of this type and who feel misunderstood, judged, condemned and excluded, although they continue to believe in the mercy of God the Father and wish to live in the bosom of the Church.

An Italian archbishop, the theologian and canon lawyer Bruno Forte of Chieti-Vasto, told the same synod that the evangelisation of young people often ran up against a “dramatic” situation “for the offspring of divorced and remarried parents, who are often rendered strangers to the sacraments by the non-participation of their parents” and said  a “decisive turning-point is needed in terms of pastoral care”.

Holding back the Germans

The announcement of next year’s synod came the same time as news that an important German diocese had issued guidelines that appeared to lift the exclusion of the divorced and remarried from Communion. The diocese is Freiburg, whose archbishop, Robert Zollitsch, the president of the German bishops’ conference, is due to retire.

According to Der Spiegel the guidelines say: “Following a decision taken responsibly and according to one’s conscience, the possibility can also arise, under concrete circumstances, to receive the sacraments of baptism, Holy Communion, confirmation, confession and Anointing of the Sick, as long as the necessary faithful disposition is present.”

Without mentioning the Freiburg guidelines precisely, Fr Lombardi stressed the importance of the Church moving together on the issue. “In this context, offering special pastoral solutions by individuals or local offices can risk causing confusion,” he said, stressing the importance of “conducting a journey in full communion with the Church community.” (He also told John Thavis that “it made little sense for a single archdiocese to stake out a new policy on such an important issue when the universal church was preparing to discuss it at length.”)

According to Reuters, meanwhile, a spokesman for the Cardinal Archbishop of Munich, Reinhard Marx, one of the eight cardinals on the Pope’s C-8 council, called the guidebook “a contribution to an unfinished discussion” and stressed the issue must be solved by the worldwide Church. 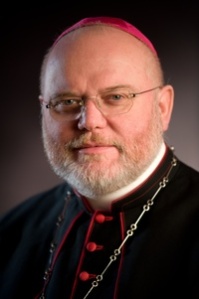 This is not the first time the German bishops have sought to run ahead on this issue.

In 1994, three German bishops allowed Communion to Catholics who were divorced and remarried civilly, until the Vatican intervened to stop the practice, arguing that it undermined the Church’s Gospel-based conviction that marriage is indissoluble.

Following a dialogue with the bishops, the Congregation for the Doctrine of the Faith (CDF) sent a letter the next year to the world’s bishops to clarify the reasons for excluding the divorced and remarried, and confirming that “members of the faithful who live together as husband and wife with persons other than their legitimate spouses may not receive Holy Communion.”

But the letter acknowledged the suffering of Catholics barred from the sacraments often through no fault of their own, and noted that “in pastoral action one must do everything possible to ensure that this is understood not to be a matter of discrimination but only of absolute fidelity to the will of Christ who has restored and entrusted to us anew the indissolubility of marriage as a gift of the Creator.”

Four years later, in 1998, the CDF’s then head Cardinal Ratzinger published an essay which acknowledged the possibility of expanding the canonical recognition of the nullity of marriages celebrated “without faith” by at least one of the spouses, although baptised. He also alluded to the possibility of a decision in conscience by someone convinced their marriage was null even though it had not been annulled in a tribunal (see Sandro Magister here). 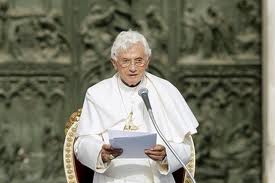 At the World Meeting of Families in Milan on 2 June 2012 Pope Benedict said that “the problem of divorced and remarried persons is one of the great sufferings of today’s Church. And we do not have simple solutions.”

He said that parishes should try “to do whatever is possible to help them to feel loved and accepted, to feel that they are not “excluded” even though they cannot receive absolution or the Eucharist … It is also very important that they truly realize they are participating in the Eucharist if they enter into a real communion with the Body of Christ.”