Communion for the remarried: Vatican opens door to reform via annulments

Posted on October 23, 2013 by catholicvoicesmedia 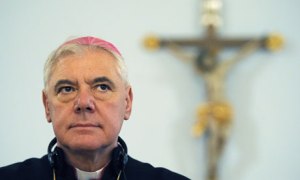 An important statement by the head of the Vatican’s doctrinal congregation, the CDF, has reaffirmed existing church teaching on not admitting to the Eucharist Catholics who have remarried without first annulling their marriage.

But in the article in the Vatican’s official newspaper, Osservatore Romano,  Archbishop Gerhard Müller also opens the door to widening the grant of annulments in acknowledging that many couples nowadays enter marriage without a proper understanding of it as a permanent, binding union.

The 4,600-word article (English translation here), which was clearly written with the agreement of Pope Francis, has dampened speculation growing in some quarters that next year’s bishops’ synod on the family would agree to end the exclusion of the remarried from receiving Communion.

Shortly before that synod was announced, a German diocese had sought to implement its own new policy relaxing the ban — and was pulled up by the Vatican, which made clear that any changes needed to be agreed by the Church as a whole (see CV Comment here).

The issue came up frequently during the last pontificate. In  2007 Pope Benedict noted that the issue “represents a complex and troubling pastoral problem, a real scourge for contemporary society, and one which increasingly affects the Catholic community as well.” In 2012 he said ”the problem of divorced and remarried persons is one of the great sufferings of today’s Church” to which there were no “simple solutions.”

At the October 2012 Synod on the New Evangelisation, many bishops said they were looking for better ways of upholding the permanence of marriage while at the same time enabling those whose marriages had not lasted to feel part of the Church. Some pointed out that the breakdown of marriage in western culture means that increasing numbers of Catholics are barred from the Eucharist while their children grow up in households where receiving Communion is not the norm, presenting obstacles to evangelisation.

Pope Francis told reporters on his plane back from Rio de Janeiro in July that the next synod’s exploration of a “deeper pastoral care of marriage” would include the question of divorced and remarried Catholics, adding that the area for reform was church law governing marriage annulments.  Such problems, he said, showed a general need for forgiveness in the Church today, adding: “The Church is a mother, and she must travel this path of mercy, and find a form of mercy for all,” the pope said.

Archbishop Müller’s letter clarifies that an appeal to God’s mercy doesn’t justify admitting the remarried to Communion. While acknowledging that a “case for the admission of remarried divorcees to the sacraments is argued in terms of mercy,” such an argument “misses the mark” in regard to the sacraments, since the “entire sacramental economy is a work of divine mercy and it cannot simply be swept aside by an appeal to the same.”

An objectively false appeal to mercy also runs the risk of trivializing the image of God, by implying that God cannot do other than forgive. The mystery of God includes not only his mercy but also his holiness and his justice. If one were to suppress these characteristics of God and refuse to take sin seriously, ultimately it would not even be possible to bring God’s mercy to man.

But if the letter appears to close the door to admitting the remarried to Communion, it also opens the door to expanding access to annulments in acknowledging that many marriages may today be invalid because couples were influenced by the prevailing social view of marriage as temporary.

Today’s mentality is largely opposed to the Christian understanding of marriage, with regard to its indissolubility and its openness to children.  Because many Christians are influenced by this, marriages nowadays are probably invalid more often than they were previously, because there is a lack of desire for marriage in accordance with Catholic teaching, and there is too little socialization within an environment of faith.

The Catholic marriage annulment system involves examining a marriage that has broken down for evidence of “invalidity”. If it can be shown that the agreement a couple entered into was not valid and therefore cannot be enforced — if, for example, there was coercion involved, or if they did not properly understand what they were committing themselves to — the Church declares the marriage invalid, and the parties to it are free to marry again and receive the Sacraments. (The Church believes a valid marriage is indissoluble, meaning that no authority on earth has to power to dissolve it.)

The implication of Archbishop Müller’s remarks is that, if more marriages are nowadays invalid than they were previously, the annulment process needs to recognise this fact.

But there is no question of a couple deciding for themselves that their marriage is invalid.

If remarried divorcees are subjectively convinced in their conscience that a previous marriage was invalid, this must be proven objectively by the competent marriage tribunals.  Marriage is not simply about the relationship of two people to God, it is also a reality of the Church, a sacrament, and it is not for the individuals concerned to decide on its validity, but rather for the Church, into which the individuals are incorporated by faith and baptism.

And while the document acknowledges that there are marriages which become “impossible”, separation, rather than divorce, is the only option.

Admittedly there are situations – as every pastor knows – in which marital cohabitation becomes for all intents and purposes impossible for compelling reasons, such as physical or psychological violence.  In such hard cases, the Church has always permitted the spouses to separate and no longer live together.  It must be remembered, though, that the marriage bond of a valid union remains intact in the sight of God, and the individual parties are not free to contract a new marriage, as long as the spouse is alive.  Pastors and Christian communities must therefore take pains to promote paths of reconciliation in these cases too, or, should that not be possible, to help the people concerned to confront their difficult situation in faith.

Archbishop Müller shows that what he calls the “testimony of the Church’s tradition”  has sought to take seriously Jesus’ word in Scripture and the “unanimous” view of the early Church fathers on the question. The departure from that norm came as result of temporal influence on the Church, especially in the east.

In many regions, greater compromises emerged later, particularly as a result of the increasing interdependence of Church and State.  In the East this development continued to evolve, and especially after the separation from the See of Peter, it moved towards an increasingly liberal praxis.  In the Orthodox Churches today, there are a great many grounds for divorce, which are mostly justified in terms of oikonomia, or pastoral leniency in difficult individual cases, and they open the path to a second or third marriage marked by a penitential character.  This practice cannot be reconciled with God’s will, as expressed unambiguously in Jesus’ sayings about the indissolubility of marriage.

In the West, however, the tradition was reaffirmed — at the cost, in England, of schism.

In the West, the Gregorian reform countered these liberalizing tendencies and gave fresh impetus to the original understanding of Scripture and the Fathers.  The Catholic Church defended the absolute indissolubility of marriage even at the cost of great sacrifice and suffering.  The schism of a “Church of England” detached from the Successor of Peter came about not because of doctrinal differences, but because the Pope, out of obedience to the sayings of Jesus, could not accommodate the demands of King Henry VIII for the dissolution of his marriage.

This tradition was reaffirmed at the Council of Trent and the Second Vatican Council,. and by the Magisterium of the John Paul II and Benedict XVI. Yet modern culture takes an increasingly different view, making it harder and harder to believe in the possibility of a permanent union.

The doctrine of the indissolubility of marriage is often met with incomprehension in a secularized environment.  Where the fundamental insights of Christian faith have been lost, church affiliation of a purely conventional kind can no longer sustain major life decisions or provide a firm foothold in the midst of marital crises – as well as crises in priestly and religious life.  Many people ask:  how can I bind myself to one woman or one man for an entire lifetime?  Who can tell me what my marriage will be like in ten, twenty, thirty, forty years?  Is a definitive bond to one person possible at all?  The many marital relationships that founder today reinforce the scepticism of young people regarding definitive life choices.

Yet such permanence is what people now, more than ever, seek in their hearts.

On the other hand, the ideal – built into the order of creation – of faithfulness between one man and one woman has lost none of its fascination, as is apparent from recent opinion surveys among young people.  Most of them long for a stable, lasting relationship, in keeping with the spiritual and moral nature of the human person.  Moreover, one must not forget the anthropological value of indissoluble marriage:  it withdraws the partners from caprice and from the tyranny of feelings and moods.  It helps them to survive personal difficulties and to overcome painful experiences.  Above all it protects the children, who have most to suffer from marital breakdown.

In the growing tension between society’s and the Church’s view of marriage, the Church is called not to capitulate to the first but reaffirm the second.

A serious pastoral problem arises from the fact that many people today judge Christian marriage exclusively by worldly and pragmatic criteria.  Those who think according to the “spirit of the world” (1 Cor 2:12) cannot understand the sacramentality of marriage.  The Church cannot respond to the growing incomprehension of the sanctity of marriage by pragmatically accommodating the supposedly inevitable, but only by trusting in “the Spirit which is from God, that we might understand the gifts bestowed on us by God” (1 Cor 2:12) … By adapting to the spirit of the age, a weary prophet seeks his own salvation but not the salvation of the world in Jesus Christ.”

But while reaffirming church teaching, the letter calls for “a much more wide-ranging pastoral approach, which seeks to do justice to to the different situations”. What that might look like is now for the bishops’ synod to consider.

This blog offers comments on news stories as they relate to the Catholic Church. For more information on Catholic Voices visit www.catholicvoices.org.uk
View all posts by catholicvoicesmedia →
This entry was posted in Uncategorized and tagged Catholic marriage annulment, marriage, Vatican. Bookmark the permalink.
%d bloggers like this: