Anglican bishops back Nichols over poverty impact of welfare reforms

Posted on February 20, 2014 by catholicvoicesmedia

The Archbishop of Westminster’s criticism of the “disgraceful” effects on the poorest of the Government’s welfare reforms has been echoed by a large group of Anglican bishops and other clergy, who say half a million people have visited food banks in the UK since last Easter. 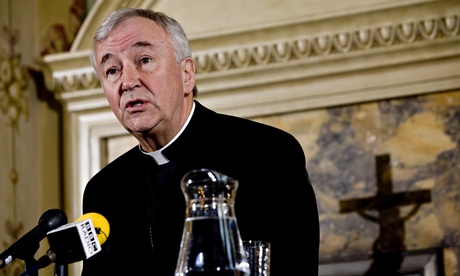 Archbishop Vincent Nichols arrived in Rome last night for a two-day meeting of the world’s cardinals with Pope Francis before being made a cardinal himself on Saturday, along with 18 others. He is one of 185 cardinals discussing marriage and family.

His criticisms of the impact of welfare reforms which last week provoked a defensive response from the Government (see CV Comment here), have been backed in a letter in today’s Daily Mirror signed by 27 Anglican bishops (almost half of the national total of 59) together with 16 Methodist and Quaker leaders. They write:

Britain is the world’s seventh largest economy and yet people are going hungry.

Half a million people have visited foodbanks in the UK since last Easter and 5,500 people were admitted to hospital in the UK for malnutrition last year.

One in five mothers report regularly skipping meals to better feed their children, and even more families are just one unexpected bill away from waking up with empty cupboards.

We often hear talk of hard choices. Surely few can be harder than that faced by the tens of thousands of older people who must “heat or eat” each winter, harder than those faced by families whose wages have stayed flat while food prices have gone up 30% in just five years.

Yet beyond even this we must, as a society, face up to the fact that over half of people using foodbanks have been put in that situation by cut backs to and failures in the benefit system, whether it be payment delays or punitive sanctions.

The signatories are calling on people to fast during Lent in solidarity with those going hungry in what they call a “national crisis”. And they are asking the Government “to investigate food markets that are failing, to make sure that work pays, and to ensure that the welfare system provides a robust last line of defence against hunger.”

The UK is in the midst of the most radical shake-up of the welfare system for decades. The government’s welfare reforms include:

Last month the Chancellor, George Osborne, who has already removed £28 billion from

the welfare bill, announced plans for a further £25 billion of cuts, with £12 billion to be taken from the welfare budget after 2015. Helen O’Brien, head of the Catholic bishops’ agency Caritas Social Action Network (CSAN), warned of the impact this would have. “Relentless cuts to the welfare budget have already left many of the UK’s most vulnerable people without a safety net,” she said.

The Prime Minister has defended the reforms as “about giving new purpose, new opportunity, new hope – and yes, new responsibility to people who had previously been written off with no chance.”

Archbishop Nichols, who will be made a cardinal on Saturday, told Radio 4 that something was “seriously wrong” with a welfare system that allowed poorer members of society to remain “in a destitute situation”. He said politicians were facing a “moral challenge” in living up to “the principle that we have to regard and treat every single person with respect”.