Posted on March 6, 2014 by catholicvoicesmedia 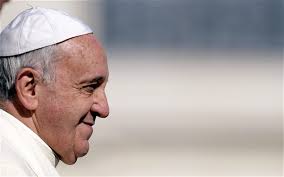 Francis’s 5 March interview with Corriere della Sera — published simultaneously by La Nación in Argentina — contains fewer surprises than we have been used to in his previous ones, and has therefore attracted less attention than they did. In part this shows that Francis’s novelty is wearing off: the media are getting used both to the fact that he does such interviews, and the views expressed in them. But that doesn’t make them any less interesting.

The interview contains no across-the-board lede. Different media have found stories in different parts: the BBC, like the Boston Globe, is struck by his defence of the Church over sexual abuse, the Guardian by his rejection of papolatry, while the Daily Mail gets excited over a ‘revelation’ of Francis falling for a girl while in seminary (although the story is as old as a book that came out in 2011.) Many, like the Sydney Morning Herald, hone in on his apparent openness to civil unions (although he is careful not to give any across-the-board view) while clearly rejecting same-sex  marriage; while the Telegraph thinks there is a story in Francis not ‘ruling out’ retiring. For the Catholic media, the biggest story was Francis appearing to praise Pope Paul VI’s encyclical on contraception, Humanae Vitae, for years seen as the dividing line between liberal and conservative Catholics.

From a communications point of view, this interview seems intended to shoot down a few balloons — scotching a few myths, downplaying some expectations, and trying to rescue the real Francis from beneath the ideological projections. But it is revealing in a number of important respects. Here are the highlights.

Francis says the emeritus pope is not “a statue in a museum” but “an institution which we haven’t yet got used to”. He points out that before the reforms of Paul VI, the idea of “emeritus bishop” did not exist — there was no retirement age for bishops — but now emeritus bishops are part of the institution of the Church. In the same way, we are adapting now to the idea of an emeritus pope. “His is discreet, humble, he doesn’t want to bother anyone,” the Pope says.

Francis makes clear that his role has been discussed between them. Having talked it over, they had both reached the conclusion that it was better for him to see people and take part in the life of the Church. Francis invited him to take part in the consistory to create new cardinals, and he accepted. Francis praises his wisdom and says he thinks of “grandparents, who with their wisdom and their counsel give strength to a family and do not deserve to end their lives in a nursing home.”

Francis says he had not expected this “diocesan transfer” — i.e. being elected — and in March last year “I had no project to change the Church”. His programme is seeking to implement the priorities defined by the cardinals in their pre-conclave discussions. He proceeds, he says, on the basis of waiting for the Lord to give him inspiration.

Francis says he dislikes “ideological interpretations” of him and his papacy, which he describes as “a certain ‘mythology of Pope Francis’.”

I believe Sigmund Freud said that in every idealization there is an aggression. Depicting the Pope as a sort of superman, a kind of star, seems offensive to me. The Pope is a man who laughs, cries, sleeps calmly and has friends like everyone. A normal person.

“The truth is that I am not nostalgic,” says Francis, but adds that he would like to visit his sister, who is unwell, “but this does not justify a trip to Argentina. I call her by phone and this is enough.” He says he is not thinking of going to Argentina before 2016 and that “now” he must go to the Holy Land, Asia, and then Africa.

I want to say two things. The cases of abuses are terrible because they leave extremely deep wounds. Benedict XVI was very courageous and he opened the way [to dealing with the issue]. And following that path, the Church has come a long way. Perhaps more than anyone. The statistics on the phenomenon of the violence against children are shocking, but they also show clearly that the great majority of abuses take place in the family environment and from people close to the victims. The Catholic church is perhaps the single public institution to have moved with transparency and responsibility. No one has done more, yet the church is the only one to have been attacked.

The Gospel condemns the cult of wealth. ‘Pauperism’ is one of the critical interpretations. In Medieval times, there were a lot of pauperistic currents. St. Francis had the genius of placing the theme of poverty in the way of the Gospel. Jesus says that one cannot serve two masters, God and money. And when we are judged in the last judgement (Matthew 25), we will be asked about our closeness to poverty. Poverty distances us from idolatry, it opens the doors to Providence. Zaccheus gave half of his wealth to the poor. And to those who keep their wheat barns full of their own selfishness, the Lord, in the end, will call them to account. I have expressed fully in Evangelii Gaudium what I think about poverty.

It is true, globalization has saved many from poverty, but it has condemned many others to die of hunger, because with this economic system it becomes selective. The globalization which the Church thinks of is not like a sphere in which every point is equidistant from the center and in which, therefore, we lose the distinctiveness of different peoples, but a polyhedron, with its different faces, in which every people conserves its own culture, language, religion, identity. The current ‘spherical’ economic, and especially financial, globalization produces a single way of thinking, a weak way of thinking. At the centre is no longer the human person, but money.

Francis recalls deciding on the theme of the synod three months after his election, and choosing the family, “which is undergoing a very serious crisis” to which “we must give a response”. For this deep reflection is required, which is what the consistory and the synods are engaged in. Only in the light of “deep reflection” can particular issues such as those of the divorced and remarried be faced. 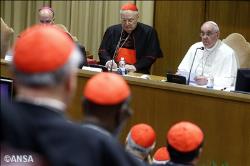 Referring to the recent extraordinary consistory in Rome,  he says: “Cardinal Kasper made a beautiful and profound presentation that will soon be published in German, in which he covered five points, the fifth of which was that of second marriages.” He said he was glad that there was vigorous discussion. “The cardinals knew that they could say what they wanted, and they presented many different points of view, which is always enriching. The fraternal and open debate develops theological and pastoral thinking. I am not afraid of this; in fact, I look for it.”

Marriage is between a man and a woman. Religiously-neutral states wish to introduce civil unions to regulate different situations of cohabitation, impelled to regulate economic aspects between persons, such as for example social security. One needs to see the different cases and evaluate them separately.

10. PLACE OF WOMEN IN THE CHURCH

It is true that women can and should be more present in  decision-making roles in the Church. But this I would call this a promotion of a functional sort. Just doing this doesn’t get you very far. It’s better to think of the Church as having a feminine article (‘la’). She has been feminine from the beginning. The  theologian Hans Urs von Balthasar worked a lot on this subject: the Marian principle guides the Church hand in hand with the Petrine principle. The Virgin is more important than any bishop and any apostle. The theological deepening of this is underway. Cardinal Rylko, with the Council for the Laity, is working in this direction with many women experts in different areas.

Asked if the Church can reconsider the question of birth control, Francis says it depends on how you interpret the text of Humanae Vitae (Paul VI’s 1968 encyclical).

Paul VI himself, towards the end, urged confessors to show great mercy, and to pay attention to concrete situations. But his genius was prophetic, for he had the courage to go against the majority, to defend moral discipline, to apply the brakes on culture, and to oppose neo-Malthusianism* both at the time and in the future. It’s not about changing doctrine but of going to the roots and ensuring that our pastoral outreach keeps in mind the situations of each person and what they are capable of. This will also be discussed in the run-up to the synod.

[*i.e. theories of population control based on eugenic ideas, and specifically the idea that the broader use of contraceptives will eliminate vice and raise the standard of living.]