Posted on April 13, 2014 by catholicvoicesmedia 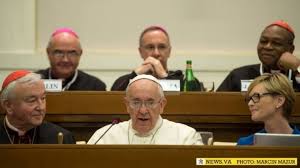 Last Thursday the Vatican hosted an international conference on the scandal of human trafficking, deplored by Pope Francis as a “crime against humanity”. The two-day conference, organized by the Church in England and Wales and chaired by Cardinal Vincent Nichols, brought together international police chiefs and religious leaders who pledged to work together to fight modern-day slavery. At the end of the meeting, Pope Francis met privately with four women who had been victims of trafficking.

The Church and Law Enforcement in Partnership conference brought together 120 politicians, religious leaders, police chiefs and trafficking survivors to discuss the ways in which the Church can help combat human trafficking. It was intended to build on the work of a previous 2012 conference organised by the Bishops Conference of England and Wales with the Vatican.
With an estimated 2.4 million victims per year, human trafficking is the second most profitable criminal enterprise in the world after the arms trade. The covert and exploitative nature of trafficking means that identifying trafficked individuals is an immensely difficult task, and one that requires collaborative effort from governments, the police, businesses, and voluntary groups embedded in local communities. 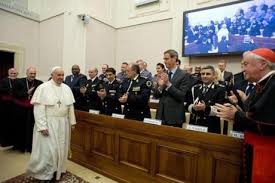 Cardinal Nichols, who chaired the conference, expressed his hope that anti-trafficking initiatives in the UK and especially London would become a ‘model of co-operation’ for combating human trafficking worldwide. The Cardinal spoke of the collaboration between the Metropolitan Police and London’s anti-slavery charities, as well as of the Coalition government’s draft Modern Slavery Bill, which aims to give greater protection to trafficking victims and increase the number of convictions for trafficking. He also spoke of plans to establish a Church-run recovery centre for trafficking survivors which will be funded through Caritas. The extensive work of female religious congregations, who offer support, refuge, and rehabilitation to trafficked women, was also highlighted. 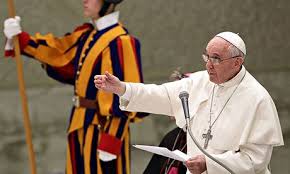 Because trafficked individuals are very often unwilling or unable to come forward to the police themselves, whether due to trauma, fear of retribution, or concerns that their immigration status may be revoked, building compassionate personal relationships is of prime importance in successfully identifying and rehabilitating trafficked individuals. Previous large-scale anti-trafficking raids in the UK were often deeply distressing for the women involved and tended to yield poor results.Detective Inspector Kevin Hyland of the Metropolitan Police explained how officers who conduct raids on brothels and suspected crime scenes in London ask religious sisters from a local congregation to speak to suspected victims on the raided premises, as women find themselves able to trust and confide in the sisters far more easily than with the police.The conference also launched the Santa Marta Commitment, through which representatives from the police forces from over 20 countries pledged to “eradicate the scourge of this serious criminal activity, which abuses vulnerable people.” The Santa Marta group — so-called because they were housed in the Vatican guesthouse where Francis lives, the Casa Santa Marta — will next meet again in London in November to share expertise, do training, and organise practical initiatives to combat human trafficking both across borders and within their own countries.Prayerful as well as practical efforts were up for discussion, such as the Day of Prayer for victims of human trafficking inaugurated on 8th January 2014. This is the feast day of St Josephine Bakhita, a Canossian Sister sold into slavery as a child, who is being promoted as a possible patron saint for human trafficking victims.Addressing the conference, Pope Francis described human trafficking as “an open wound on the body of contemporary society, a scourge upon the body of Christ”. The ITV News presenter Julie Etchingham, who was seated next to the Pope, said she could see his speech in his hands as he read it, and that “even by the end of the first paragraph he departed from his text”: “Basta, basta,” he exhorted. “When it comes to human trafficking, enough! Enough!” (See her account, with video clips, here. Interview with Cardinal Nichols here.) 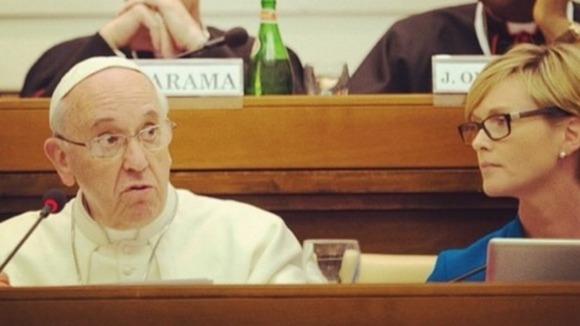 Francis stressed the importance of having anti-trafficking strategies that are “accompanied and reinforced by the mercy of the Gospel, by closeness to the men and women who are victims of this crime,’ and praised those who give trafficking victims ‘welcome, human warmth and the possibility of building a new life.”

Etchingham later interviewed Francis, asking him if he had a message for the traffickers and the victims.

His answer came slowly, he weighed every word. A pause between each phrase to allow the translation to come. Here is a master communicator, uncontrolled by a press officer – seizing another opportunity to be a voice for the voiceless.

“It’s an absolute shame. It’s a crime against humanity. It’s a form of slavery and as Christians, those who suffer are the body of Christ, the flesh of Christ,” he said

He paused, and added:

“Humanity still hasn’t learned how to cry, how to lament. We need many tears in order to understand the dimension of this drama.”