Vatican reform leaps ahead with overhaul of bank and media

Posted on July 10, 2014 by catholicvoicesmedia

A new president of the so-called Vatican Bank, the IOR, and the appointment of Christopher Lord Patten, chancellor of Oxford University, to head a new committee overseeing reforms to media, were among the announcements made yesterday by Cardinal George Pell, prefect of the new Secretariat of the Economy, in the biggest overhaul yet of the Curia.

A French businessman, Jean-Baptiste de Franssu, will replace Ernst Von Freyberg, a German who has run the bank since February 2013, as head of the Institute for Works of Religion. Six new lay members, including Mary Ann Glendon, a former U.S. ambassador to the Holy See, Harvard law professor, and longtime Vatican collaborator, will join the bank’s board, together with the British-Australian financier and Vatican patron of the arts, Sir Michael Hintze. In a striking departure from tradition, none of the new members is Italian.

Among other changes, the Administration of the Patrimony of the Apostolic See (APSA), which handles the assets of the Vatican City State, will be split, with one part transferred to the Secretariat of the Economy, and the other becoming a Treasury and Central Bank to ensure the Vatican remains liquid. (“It means they’ll be responsible for keeping a supply of cash coming into the Vatican to ensure its financial stability and liquidity,” Cardinal Pell told the Boston Globe. “The idea is to make sure there’s enough money to keep the place going.”) One of its tasks will be to establish relationships with central banks in other states to ensure that its practices match international standards of transparency and accountability.

The IOR will meanwhile have a much more limited role. Its  investment business will be transferred to a new central body called Vatican Asset Management, leaving the IOR to focus on financial advice and payment services for clergy, congregations, dioceses and lay Vatican employees.  The IOR has already shrunk its profits, after shelling out $11 million in expenses associated with a detailed review of all accounts and losing $60 million deposits after closing roughly 3,000 accounts that do not fit its new profile, which Von Freyberg, the outgoing president, said would be largely as a “savings and loan for religious congregations.”

“Today, we know who our clients are,” von Freyberg told reporters, adding that there are no longer “secret accounts”, nor money invested by “Italian families and politicians,” or accounts held by “bad organizations.” By cleaning up the IOR, he said, he gave Pope Francis an option other than closing it.

Pell also announced that for fiscal year 2015, every Vatican department will  — in contrast to past practice — be expected to have a formal budget, and be held accountable for over-spending.

Cardinal Pell, head of the Vatican’s Secretariat of Economy, and architect of the changes

“The ambition is to become a model of financial management, rather than an occasional source for scandals,” he said, adding:  “The Pope has said clearly that he wants rapid movement.”

He told the Boston Globe:

The idea is to introduce modern accounting standards, to strengthen transparency, to increase self-sufficiency and coordination, and eventually to generate more income with lower costs.

Basically, the ambition is to be boringly successful, to get off the gossip pages. The aim is to become a model of good practice in financial administration. Along the way, we’re not going to generate any less revenue for the works of the Church. We’ve also got to be careful that we preserve the Vatican’s patrimony, so we don’t put anything at risk with short-term moves.

The cardinal told reporters there is at the moment little or no relation between the Vatican’s media expenditures and the number of people it reaches. Fewer and fewer people around the world listen to the radio, yet the Vatican’s largest media employer is Vatican Radio, which produces programs in 45 languages. The success of the Vatican’s social media — the Pope’s Twitter account, and the PopeApp for mobile devices — point to the need to expand the Church’s digital outreach.

The new media commission will be headed by Lord Patten, who brings great professional experience chairing or reforming large and traditional institutions, among them the BBC, Oxford University, and the Conservative Party. A Benedictine-educated Catholic, Lord Patten is likely to have been suggested by Britain’s two cardinals, Cormac Murphy-O’Connor and Vincent Nichols. Lord Patten, who stepped down as chairman of the BBC Trust in May following heart surgery, was crucial in bringing the new British Government behind the visit of Pope Benedict XVI in 2010, working closely with Cardinal Nichols.

The commission’s secretary will be the Irishman Mgr Paul Tighe, currently secretary of the Pontifical Council for Social Communications and an expert in social media.

The commission’s task is to review the recommendations made by the international consulting firm McKinsey, which was hired in December to review the Vatican communications structures and recommend ways to streamline and modernize them.

The other commission members are (U.S.) Greg Erlandson, president and publisher of Our Sunday Visitor Publishing; (Germany) Daniela Frank, executive director of the Catholic Media Council in Germany; (France) Dominican Father Eric Salobir, media promoter for the Dominicans worldwide; (Mexico) Leticia Soberon, a psychologist who is one of the founders and the chief content officer of dontknow.net; (Singapore) George Yeo, former finance minister of Singapore and a member of the Vatican’s new Council for the Economy; (Argentina) Mgr Lucio Adrian 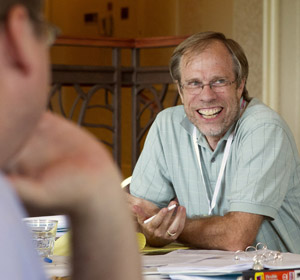 Ruiz, head of the Vatican Internet Service and its telecommunications office; as well as three Italians:  Giacomo Ghisani, director of international relations and legal affairs at Vatican Radio; Giovanni Maria Vian, editor in chief of the Vatican newspaper, L’Osservatore Romano; and  Mgr Carlo Maria Polvani, the Vatican’s representative to the government advisory committee of the Internet Corporation for Assigned Names and Numbers.

There are three clear trends discernible in the reforms announced yesterday.

The first is the de-Italianization or internalization of the Curia. The paucity of Italians among the 17 new appointments announced yesterday reflects Francis’s policy of striving to break what had been an historical Italian monopoly. “We’re a universal church, so the people in the key positions should be universal,” Pell said, “though with many terrific Italians.” This statement suggests that future reforms of governance being looked at by the Council of Eight cardinals (C8) will reduce the numbers of Italians in key posts.

The second is the incorporation of lay expertise. “We’ve never seen such an injection of lay leadership into the senior ranks of the Church as we’re seeing now with finances,” Pell told the Boston Globe. “That’s extremely healthy, because it’s an area in which we clerics don’t necessarily have any expertise.”

The reaching-out to lay experts has been under way for some time, with McKinsey being brought in to review communications, KPMG to raise accounting standards, Ernst & Young to overhaul the finances of the Vatican city government, and the Washington-based Promontory Financial Group to sift through the operations of the IOR (the so-called Vatican Bank) and APSA.

The third dimension is to focus curial activity on its core purpose of supporting the work of the Pope and the Holy See in service of evangelization, peeling away layers of “worldliness” which have over time become attached to the Vatican’s activities — symbolized by the IOR’s susceptibility to money-laundering. One of the key elements in yesterday’s announcements was the greater control the Secretariat of the Economy is exercising over all the economic activities in the Vatican, bringing to an end a series of unedifying Italian practices such as rigging competitive bidding to benefit friends and money-laundering for fat-cat benefactors.

Lastly, these reforms — and others to come — cannot easily be reversed. As Pell told the Boston Globe:

Nobody in living memory has seen anything like this before. What’s so new are the structural reforms. We’ve now got different focuses of authority and checks and balances. We’re also injecting some of the top financial people from around the world into the leadership of these different agencies, and they won’t stay on these boards if the businesses aren’t run properly …. Going forward, you won’t be able to change the system back to what it was before simply by changing one person. A whole network of institutions is being set up, with more to come.

[Austen Ivereigh’s biography of Pope Francis, The Great Reformer, will be published in the Autumn]

This blog offers comments on news stories as they relate to the Catholic Church. For more information on Catholic Voices visit www.catholicvoices.org.uk
View all posts by catholicvoicesmedia →
This entry was posted in Uncategorized and tagged curial reform, Pope Francis, Vatican Bank. Bookmark the permalink.
Loading Comments...
%d bloggers like this: