Vatican at UN warns of ‘contagion of violence’ in Gaza

Posted on July 25, 2014 by catholicvoicesmedia 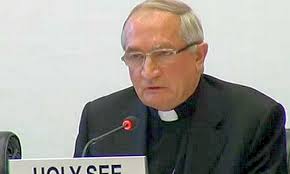 Statement by H.E. Archbishop Silvano M. Tomasi, Permanent Representative of the Holy See to the United Nations and Other International Organizations in Geneva at the 21st Special Session of the Human Rights Council on the human rights situation in the Occupied Palestinian Territory including East Jerusalem (Geneva, 23 July 2014)

As the number of people killed, wounded, uprooted from their homes, continues to increase in the conflict between Israel and some Palestinian groups, particularly in the Gaza Strip, the voice of reason seems submerged by the blast of arms. Violence will lead nowhere either now or in the future. The perpetration of injustices and the violation of human rights, especially the right to life and to live in peace and security, sow fresh seeds of hatred and resentment. A culture of violence is being consolidated, the fruits of which 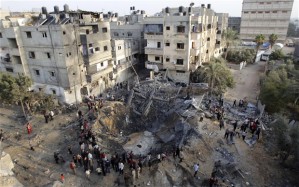 are destruction and death. In the long run, there can be no winners in the current tragedy, only more suffering. Most of the victims are civilians, who by international humanitarian law, should be protected. The United Nations estimates that approximately seventy percent of Palestinians killed have been innocent civilians. This is just as intolerable as the rockets missiles directed indiscriminately toward civilian targets in Israel. Consciences are paralyzed by a climate of protracted violence, which seeks to impose solution through the annihilation of the other. Demonizing others, however, does not eliminate their rights. Instead, the way to the future, lies in recognizing our common humanity.

In his Pilgrimage to the Holy Land, Pope Francis demanded that the present unacceptable situation of the Israeli-Palestinian conflict be brought to an end.

1. “For the good of all,” he said, “there is a need to intensify efforts and initiatives aimed at creating the conditions for a stable peace based on justice, on the recognition of the rights of every individual, and on mutual security. The time has come for everyone to find the courage to be generous and creative in the service of the common good, the courage to forge a peace which rests on the acknowledgment by all of the right of two States to exist and to live in peace and security within internationally recognized borders.”

2. The legitimate aspiration to security, on one side, and to decent living conditions, on the other, with access to the normal means of existence like medicines, water and jobs, for example, reflects a fundamental human right, without which peace is very difficult to preserve.

The worsening situation in Gaza is an incessant reminder of the necessity to arrive at a cease-fire immediately and to start negotiating a lasting peace. “Peace will bring countless benefits for the peoples of this region and for the world as a whole,” adds Pope Francis, “and so it must resolutely be pursued, even if each side has to make certain sacrifices.” It becomes a responsibility of the international community to engage in earnest in the pursuit of peace and to help the parties in this horrible conflict reach some understanding in order to stop the violence and look to the future with mutual trust.

The Delegation of the Holy See reiterates its view that violence never pays. Violence will only lead to more suffering, devastation and death, and will prevent peace from becoming a reality. The strategy of violence can be contagious and become uncontrollable. To combat violence and its detrimental consequences we must avoid becoming accustomed to killing. At a time where brutality is common and human rights violations are ubiquitous, we must not become indifferent but respond positively in order to attenuate the conflict which concerns us all. 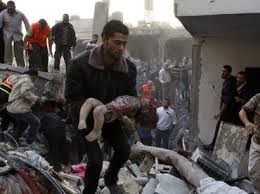 The media should report in a fair and unbiased manner the tragedy of all who are suffering because of the conflict, in order to facilitate the development of an impartial dialogue that acknowledges the rights of everyone, respects the just concerns of the international community, and benefits from the solidarity of the international community in supporting a serious effort to attain peace. With an eye to the future, the vicious circle of retribution and retaliation must cease. With violence, men and women will continue to live as enemies and adversaries, but with peace they can live as brothers and sisters.