“War is not the answer”: Cardinal Vincent Nichols calls for immediate Gaza ceasefire

Posted on July 31, 2014 by catholicvoicesmedia 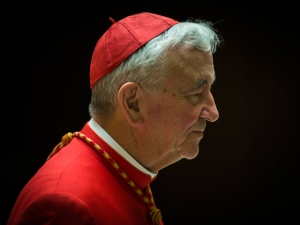 Faced with the increasing violence that is engulfing the people of Gaza, my thoughts and prayers, and those of the Catholic community, are constantly with all those who have lost loved ones and whose lives are shattered in this conflict. The pain, anguish and sense of hopelessness of those men, women and children cry out that war is not the answer. As this conflict shows, violence breeds violence. Along with so many others, I plead for an immediate truce in Gaza that will not only put an end to this latest carnage but that will also address at last the core problems behind this conflict which has so blighted the lives of all the peoples of the Holy Land.

Note: Gaza officials say at least 1,372 Palestinians, most of them civilians, have been killed and nearly 7,000 wounded. Fifty-six Israeli soldiers have been killed in Gaza clashes and more than 400 wounded. Three civilians have been killed by Palestinian shelling in Israel. The U.N. Secretary-General, Ban Ki-moon, yesterday sharply criticized the deaths of at least 15 Palestinians among thousands sheltering at a U.N.-run school, describing it as “outrageous” and “unjustifiable”. Israeli ground assaults on residential areas, preceded by mass warnings to evacuate, have displaced more than 200,000 of Gaza’s 1.8 million Palestinians. The tiny territory’s infrastructure is in ruins, with constant power and water cuts. The Israeli Prime Minister, Benjamin Netanyahu, said today he could not agree to a ceasefire until the Israeli Defence Force had completed its destruction of the underground tunnels used by Palestinian militants to attack Israel. That task is now in its fourth week.

This blog offers comments on news stories as they relate to the Catholic Church. For more information on Catholic Voices visit www.catholicvoices.org.uk
View all posts by catholicvoicesmedia →
This entry was posted in Uncategorized. Bookmark the permalink.
Loading Comments...
Comment
×
<span>%d</span> bloggers like this: