Posted on October 2, 2014 by catholicvoicesmedia

In language that could be described as undiplomatic, the Holy See has officially responded to a United Nations committee which last February issued a scathing report upbraiding the Catholic Church over its response to sexual abuse. The report was widely derided at the time as ideologically driven, shabby and dishonest in its refusal to admit evidence that contradicted its prejudices.

In its official response to that report, the Vatican accuses the UN of intolerance, of abusing its power, of failing to do basic homework, and of unacceptable interference in the Church’s teachings.

Austin Ruse, president of the Catholic Family and Human Rights Institute in New York, welcomed the robust response. He said that in all his 18 years monitoring the UN, he had “never seen the Holy See come out swinging like they just did … You have to read it to believe it”, he said, adding: “Bravo, Vatican.”

Many media from all sides of the spectrum at the time expressed astonishment at the report by the UN committee on the rights of the child (see CV Comment here), which treated the Church as a renegade, self-interested, unreformed corporation.

Now, in its detailed response to that report, the Holy See accuses the UN of “gravely misunderstanding” the Holy See’s obligations under international law in overlooking the distinctions between the Holy See, the Vatican, and the Church worldwide. The “profundity of confusion” on this point leads the report to make all kinds of onerous claims, says the Holy See.

It also accuses the committee of a “lack of respect for the text of a treaty” in attempting to make the Convention on the Rights of the Child a platform for practices such as abortion and changing the Church’s teaching on sexuality. The Holy See describes the committee’s attempt to impose abortion, for example, as “completely unacceptable” and “incompatible with the fundamental purpose and function of the international legal order”. 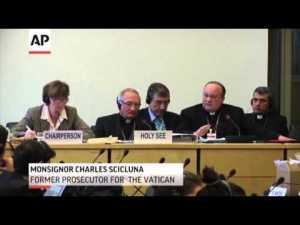 the Holy See takes the opportunity to reaffirm that the education of children (defined in art.1 CRC), boys and girls, including education about authentic human love, human sexuality, married love and related matters are primarily and fundamentally the right, duty, and responsibility of parents. The international principle regarding religious freedom recognizes that parents have the right to ensure that their child receives a religious and moral education in conformity with their own convictions, which also guarantees the freedom to teach a religion or belief.

within the context of “gender”, which is a word not contained in the text, and apparently employed to incorporate a larger ideological platform. In this latter regard, references to inherent dignity (preamble paras. 1-2, CRC) and inherent equality between the two sexes are dismissed as examples of “gender-based discrimination”, while subjective lifestyle choices and attractions are promoted as a matter of “rights”: “same sex couples”;“sexual orientation”.

The Holy See also accuses the Committee of attempted interference in areas protected by freedom of religion such as interpretation of scripture, faith and morals, amendments to canon law, and church governance.

A number of the comments in the committee report “promote negative stereotyping and manifestations of intolerance against members of the Catholic religion”, the Holy See adds.

The Holy See ends by suggesting that, as CV Comment claimed in February, the report had been written in advance of the hearing and evidence that did not suit its conclusions wholly ignored.

The Concluding Observations include inaccurate statements that have no evidentiary foundation. Moreover, many materials presented by the Holy See, especially regarding child protection were dismissed or ignored. Lastly, it is noteworthy, that answers given by a State Party not considered in line with certain suggestions does not mean that a reply to a question has not been given. For example, the Holy See was repeatedly asked the same query on various matters (e.g. discrimination based on sex, views of the child, the meaning of family, reservations, new expressions not accepted by the State Party, and matters falling within the territorial jurisdiction of other States). Indeed, the interactive dialogue largely involved the repetition of questions in the Committee’s List of Issues to which the Holy See had previously responded in its Written Replies, which, in turn, left the impression that the interactive dialogue was predetermined by Concluding Observations that had already been prepared.