From the Synod (1): Pope calls for disagreement, openness to Holy Spirit

Posted on October 6, 2014 by catholicvoicesmedia

Pope Francis has led a weekend of spiritual preparation for the extraordinary synod of bishops, which formally began today, urging its participants to be frank in disagreement but at peace with one another, and above all open to the Holy Spirit.

“From the Holy Spirit we ask for the synod fathers, first of all, the gift of listening: listening to God, until we breathe the will to which God calls us,” he prayed at a vigil on Saturday night, adding: “we invoke the willingness for a sincere discussion, open and fraternal, which leads us to take charge with pastoral responsibility of the questions that this change of time bears with it.”

Although media coverage of the synod has framed disagreements between church leaders over communion for the divorced and remarried as a battle between liberals and conservatives, it was clear from the Pope’s comments that he sees the synod not as a debate between parties but a collective search for the truth.

Referring to the fierce disagreements of the early-church councils, he invited the synod fathers to trust that “in His time the Lord will not fail to lead us back to unity. Is not the history of the Church recounted perhaps with many similar situations, that our fathers were able to overcome with obstinate patience and creativity?”

Christ, he said, was capable of resolving what seemed humanly contradictory. “Whenever we turn to the source of the Christian experience, new ways and un-thought-of possibilities open up.”

At the Mass opening the two-week synod yesterday in St Peter’s Square, he said the meeting was “not intended to discuss beautiful and clever ideas, or to see who is more intelligent”, but “to better nurture and tend the Lord’s vineyard, to help realize his dream, his loving plan for his people.” At this synod, he said, “the Lord is asking us to care for the family, which has been from the beginning an integral part of his loving plan for humanity.”

Addressing 184 bishops and 69 others who are taking part, the Pope said Jesus aimed his parable of the vineyard in St Matthew’s Gospel (21: 33-43) at the “chief priests and the elders of the people, in other words the experts, the managers,” whose job it was to “nurture, tend and protect” God’s people.

He warned against leaders who seek to take possession of the Lord’s vineyard, he said: “God’s dream always clashes with the hypocrisy of some of his servants.  We can “thwart” God’s dream if we fail to let ourselves be guided by the Holy Spirit.  The Spirit gives us that wisdom which surpasses knowledge, and enables us to work generously with authentic freedom and humble creativity.”

Unlike previous synods, which have released summaries of the bishops’ prepared speeches, the content of the speeches will not be shared directly with the media, although a daily briefing will summarize the discussions. Although this has been criticized by some journalists as a lack of transparency, it is clearly aimed at having as free a discussion as possible, and to avoid “parties”.

Although there are themes for each day’s discussion under broad headings (e.g. “natural law” or “difficult pastoral situations”) the 180 bishops and few dozen other participants can talk about whatever they want. Time has been set aside each afternoon for free discussion, when there’s no set theme. 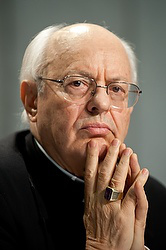 The purpose of the extraordinary synod is to, in effect, decide the agenda for a year-long process of discussion and discernment which will involve the local Church across the world.

The meeting that opens today and ends on 19 October will end with a “concluding document” known as a Relatio Synodi  which will be voted on by the Synod Fathers. The document will be sent to bishops’ conferences across the world, along with a “short questionnaire” ahead of the Ordinary Synod in October 2015.

At the end of this week there will be an initial summary document known as a Relatio Post Disceptationem,  which will be the basis for the small-group discussions next week, known as circuli menores. Their input will modify and shape the final Relatio Synodi, which the synod fathers will vote to accept or reject (by means of a simple “yes” or placet, or “no”, or non placet) on the afternoon of 18 October. The agreed text will be published two days after the synod’s end.

The document will be sent to bishops’ conferences around the world, for further input and comment, prior to the Ordinary Synod in October 2015.

“Participants will engage in a peaceful and honest debate. They are called not to force their own opinions alone, but to try to search for the truth together,” Cardinal Baldisseri has told journalists.

The Pope will be present throughout the discussions, encouraging participants to speak freely, he said.

N.B. The following sites will be carrying regular synod updates and commentary:

This blog offers comments on news stories as they relate to the Catholic Church. For more information on Catholic Voices visit www.catholicvoices.org.uk
View all posts by catholicvoicesmedia →
This entry was posted in Synod2014. Bookmark the permalink.
%d bloggers like this: