From the synod (2): Erdö speech seeks to frame the debate

Posted on October 7, 2014 by catholicvoicesmedia

The extraordinary synod opened yesterday with an attempt to define the new terms of a reformed structure that will allow for genuine discussion and discernment. Cardinal André Vingt-Trois, the Archbishop of Paris, teased journalists by telling them that “less well informed” reporters than they are had tried to understand the synod in terms of a parliamentary debate, with opposing parties and winners and losers. But that ‘optic’ simply didn’t work. “We are not here to achieve majorities for particular positions,” he said, “but to work towards the objective of allowing a common will to emerge in the Church.”

Under John Paul II and Benedict XVI, synods were conceived more as talking shops than deliberative bodies, intended to reaffirm existing doctrine and practice while bonding bishops to Rome and to other. Attempts at debate were stifled, and displays of disagreement frowned on. Yet everyone knew that there were disagreements — not least because frustrated participants used to use the media to put forward positions which they had not been able to get the synod to consider.

Under the reformed synod process now under way,  disagreements have not just been aired in advance of the synod (if they all agreed, said Archbishop Bruno Forte at the press briefing, they would not need to meet) but actively encouraged by Pope Francis, who told participants yesterday not to hold back out of fear of offending him. “A general condition is this,” he urged. “Speak clearly. Let no one say: ‘This you cannot say.'” At the same time, he added, “you should listen with humility and accept with an open heart what your brothers say.”

What are the disagreements? Given that all agree on the core doctrine of indissolubility — God’s grace, which makes a marriage, doesn’t end, and therefore sacramental marriage cannot  — the dilemma turns on how better to accompany those whose marriages have ended in law or in practice while preserving that essential good.

The relator, or rapporteur, of the Extraordinary Synod is Hungarian cardinal Peter Erdö, a highly respected canon lawyer who has been twice elected president of the Council of Episcopal Conferences of Europe, or CCEE. Because indissolubility of marriage was not in question, “what is being discussed at this synod of an intense pastoral nature are not doctrinal issues, but the practical ones,” he said in his lengthy relatio ante disceptationem, which is intended to set the terms for the discussion.

Yet it could be equally be argued that this synod is about reconciling two doctrines: indissolubility and mercy. Archbishop Bruno Forte of Chieti-Vasto, the special secretary of the extraordinary synod, told journalists that that charity and mercy were at the heart of the Church’s doctrine, and that teaching people the truth of marriage should not be “a club which judges you, but a gaze of love and mercy which reaches out to you.” As Cardinal Walter Kasper pointed out in an interview with Salt & Light television, “if God is merciful then so the Church must be, because Church is a sacrament of mercy.”

In an implicit commentary on Cardinal Kasper’s proposal to allow the divorced and remarried a penitential path back to the sacraments, Cardinal Erdö said that “mercy does not take away the commitments which arise from the demands of the marriage bond” and therefore “in the case of a (consummated) sacramental marriage, after a divorce, a second marriage recognized by the Church is impossible, while the first spouse is still alive.” He also warned that examining the practice of the Orthodox Church in respect of remarried divorcees required careful study of eastern traditions in order to avoid “questionable interpretations”.

Cardinal Erdö suggested, however, that annulments could be reformed in the light of the modern-day marriage mindset. Noting that “many marriages celebrated in the church may be invalid” he proposed – as have others, such as Cardinal Angelo Scola of Milan — a simpler, more streamlined annulment process, which could be handled initially by a nominated priest in a diocese and which in some cases could be handled via a non-judicial process handled locally, culminating in a declaration of nullity by the diocesan bishop. He told the synod:

Divorced and civilly remarried persons belong to the Church. They need and have the right to receive care from their pastors (cf. Sacramentum charitatis, 28). They are invited to listen to the Word of God, to participate in the Church’s liturgy and prayer and perform the good works of charity. The Church’s pastoral care must be extended to them in a very special way, taking into account the unique circumstances of each person. Consequently, in each particular Church, at least one duly prepared priest is needed, who can offer counsel, without charge, as a first step for the parties in ascertaining the validity of their marriage. Indeed, many spouses are unaware of the criteria for the validity of a marriage, much less the possibility that a marriage can be invalid. After divorce, this verification must be carried out in a pastoral dialogue on the causes of the failure of the previous marriage and identifying possible grounds for nullity, while avoiding every appearance of a formal bureaucratic process or any economic interest. If all this is done in a serious manner in search of the truth, the declaration of nullity process for the parties will be truly a liberating experience in conscience. 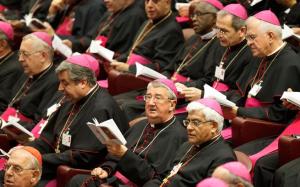 Given that “it does not seem hazardous … to believe that many marriages celebrated in the Church may be invalid”, he suggested that

in the first place, the obligation for two appeals of confirmation on the declaration of nullity of the marriage bond and proceed to the second instance only if, within a defined framework, there is no appeal from either or both parties or from the defender of the bond. A possible solution of this kind should, in any case, avoid any type of mechanics or impression of granting a divorce. Nevertheless, in some cases, other guarantees might be necessary, for example, the obligation of the defender of the bond to make an appeal so as to avoid solutions which are unjust and scandalous.

As indicated earlier here, given the broad consensus in favour of similar changes, and Pope Francis’s naming of a parallel commission to consider the options, annulment reform is the one outcome of the synod which it is safe to predict.

The idea of a more accessible, available, annulment service would have been anathema in the early 1980s, when there was great concern that annulments were too easily available, especially in the US. As Fr Thomas Reese SJ points out, that this should be seen as the “conservative” option at this synod shows that there has been real movement since then.

Yet it is perhaps more true to argue that the catastrophic loss to contemporary society of the meaning of marriage has occurred in that period, and that the acknowledgment of that dramatic fact is the main reason that the synod is happening at all.

Much in Cardinal Erdö’s address sought precisely to confront that “new fact”. Analysing the mentality of contemporary society he noted how

Many look upon their lives not as a life-long endeavour but a series of moments in which great value is placed on feeling good and enjoying good health. From this vantage point, any firm commitment seems insurmountable and the future appears threatening, because it may happen that in the future we will feel worse. Even social relationships may appear as limitations and obstacles. Respect and “seeking the good” of another person can even call for  sacrifice. Isolation is oftentimes linked, therefore, with this cult of a momentary well-being.

On the other hand, he says, the desire for marriage as a lifelong commitment remains. “The family,” he said, “is fast becoming the last welcoming human reality in a world determined almost exclusively by finance and technology,” adding: “A new culture of the family can be the starting point for a renewed human civilization.”

Much of the speech was taken up with the need for better preparation and support of marriage, as well as the many pressures that are tearing families apart. Parishes and other church communities

need to organize programmes of pastoral care to meet the needs of the family. The tendency towards the privatization of love  needs to be overcome. The Western world risks making the family a reality entrusted exclusively to the choices of the individual, totally detached from a regulatory and institutional framework. A similar privatization weakens family ties and gradually empties them of their meaning.

He also called for a new emphasis on education in love and sexuality, and a re-reading of Paul VI’s encyclical Humanae Vitae not as a prohibition in moral law, but an invitation to a positive vision of love and fertility. He added that Paul VI himself said that the encyclical was not intended as a full treatment of marriage and family and foresaw the need for “a more inclusive, organic and detailed” teaching at a later stage. 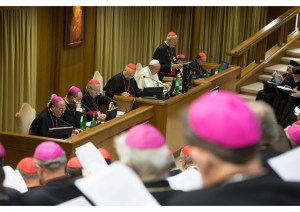 The challenge for the synod, said Cardinal Erdö, was “to try to bring back to today’s world, which in some way resembles that of the early days of the Church, the attractiveness of the Christian message about marriage and the family.”

In the afternoon, the synod heard from an Australian married couple who criticized church documents as complex and abstract.