From the synod (7): Ignoring pressure groups, bishops confident in process

Posted on October 15, 2014 by catholicvoicesmedia

Two synod fathers told journalists today that their discussions have been unaffected by lobbies and media reports of divisions, and that they expect to end with a document that reflects the thinking of the synod: one that is faithful to church teaching yet which reflects a new pastoral focus.

The Archbishop of Barcelona, Cardinal Luís Martínez Sistach, spoke of the climate of “communion, brotherhood and pastoral focus” of his group, which despite its diversity has been unanimous in agreeing modifications to the existing document, the relatio post disceptationem.

A handful of delegates — among them two Vatican cardinals and the president of the Polish bishops’ conference — have expressed unhappiness with the interim document, claiming that it causes “confusion” about church teaching. Yet both Cardinal Martínez and the president of the US bishops’ conference strongly defended the document as reflective of the discussions, while stressing that it was a work in progress intended to be improved in the groups meeting this week.

Archbishop Joseph Kurtz of Louisville said it was a “wonderful” working document, which would be improved in the small-group discussions. The archbishop, who is president of the US bishops’ conference, said it reflected a pastoral focus, “not waiting for people to come to us but rather the Church reaching out and accompanying people, starting where they are, so that together we journey closer to Christ”.

This new, missionary and pastoral approach, which marks a significant new tone for the Vatican, has been misinterpreted in some media stories as a softening or liberalizing of church doctrine (see George Weigel on the New York Times here).

Yet nothing in the relatio questions church doctrines on sexuality, marriage and the family, instead taking them for granted.

As if in response to shrill conservative objections, Pope Francis said on Monday that religious and moral law was not an end in itself.

In part, as John Allen observes, reactions to the relatio reflect an accurate perception that change is afoot: a model built for clarity is giving way to another built for mission. Just as at the Second Vatican Council, those who are attached to the “clarity” model of Church regard the missionary focus of the synod as a kind of betrayal.

Start-up lobbies such as the so-called Voice of the Family have sent representatives to the Vatican press conferences to challenge synod delegates, and have issued press statements condemning the synod.

Yet in the synod itself, delegates pay no more attention to them than to liberal lobbies such as We Are Church. The Barcelona cardinal said the delegates’ discussions had been wholly impervious to the influence of ideological or interest groups, reflecting instead the Church’s pastoral knowledge of the People of God. 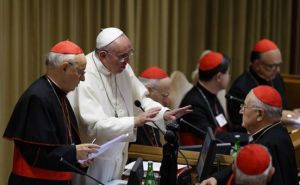 Archbishop Kurtz said he had consulted carefully before coming for the synod, but since it began has been listening primarily to other delegates. “It was largely the interaction of the delegates that were influential on me, that brought for not only my personal opinions but also the fruits of my consultation before the synod,” he said.

Cardinal Sistach said in his group there was complete freedom to express “different tendencies, sensibilities, and points of view” from which, he said, “much light can come.” The discussions had been underpinned, he added, by a pastoral focus, “that of a Church as mother and teacher who wants to see reality and to come close.” He said all the amendments his group were proposing had been agreed unanimously.

Tomorrow the amendments will be incorporated by the redacting committee into the final document, the relatio synodi, which on Saturday morning will be read to delegates and voted on.

Previous synods have ended with a series of propositions which were voted on one by one. It is not clear whether delegates will have a chance to vote on different paragraphs of the relatio synodi.

Archbishop Kurtz added that the effort was underway to “to be truly reaching out” while being faithful to church teaching, in order to put in place what he called “a pastorally enduring approach.”

This blog offers comments on news stories as they relate to the Catholic Church. For more information on Catholic Voices visit www.catholicvoices.org.uk
View all posts by catholicvoicesmedia →
This entry was posted in Synod2014, Uncategorized. Bookmark the permalink.
%d bloggers like this: