A Guide to the Family Synod, Part I: ‘Introduction’

Posted on February 23, 2015 by catholicvoicesmedia

After the Extraordinary Synod on the Family last October, the Vatican issued the Relatio Synodi, the detailed result of the assembly’s fortnight of deliberations. It was based on the week of discussions by the Synod Fathers and other delegates who contributed to each session, as well as by the reports of meetings in language-based groups who made a series of suggestions. Pope Francis ordered that every paragraph of the Relatio should be published, even though three paragraphs out of 62 did not achieve the traditional two-thirds majority of Synod Fathers’ votes. Two concerned the reception of Holy Communion by divorced and civilly remarried Catholics, and the other the pastoral care of people with homosexual tendencies.

The Relatio Synodi is the basis of the Lineamenta, a document intended to spark further discussion in the year between the Extraordinary Synod last year and the Ordinary Synod (on “The Vocation and Mission of the Family in the Church and Contemporary World”) in October this year. The Relatio Synodi itself is followed by a series of questions which the 114 bishops’ conferences around the world are asked to ponder and respond to. The Bishops’ Conference of England and Wales has issued its own document —  The Call, the Journey and the Mission — in response to the Lineamenta, asking Catholics in England and Wales to reflect on family life on the basis of the Gospel. 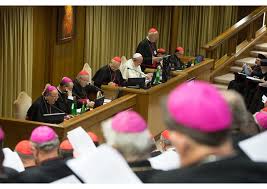 The responses to the Lineamenta will form the basis of the Instrumentum Laboris, the document which will set the agenda for October’s Synod, at the end of which the synod fathers will vote on what will be the Church’s pastoral strategy for marriage and family in the future.

In this series of posts, I will look at the Lineamenta in its four sections: the Introduction; part I, “Listening”; part II, “Looking at Christ”; and part III, “Confronting the Situation”.

(Incidentally, the English translation of the Lineamenta on the Vatican website has been wrongly numbered, with number 1 appearing twice, with the result that the paragraphs do not correspond to the paragraphs of the original Relatio. I will follow the latter for ease of reference.)

The document opens (paragraph 1) by thanking God for the “generosity and faithfulness of so many Christian families” who fulfil their mission with “joy and faith” notwithstanding the “obstacles, misunderstanding and suffering” they face. Pope Francis’s lyrical evocation of the centrality of family life at the prayer vigil for the Synod is then recalled: his beautiful vignette refers both to the joy and comfort of family life, as well as the suffering which some have to endure: “the bitter twilight of shattered dreams and broken plans”.

Family life can, the Synod notes, be wounded (2), and there are “many signs of crisis”, but people still wish to marry and form a family; the Church is an “expert in humanity” and has much to offer to people, first because of the revelation of God’s love and also because of the wisdom of the teaching of the Church Fathers. The Church also recognises the importance of the family, indeed sees it as “uniquely important to the Church” and an “essential agent in the work of evangelization”.

The Synod was convened by the Pope and gathered around him in order to reflect on the “critical and invaluable reality of the family” (3); this reflection is to continue in the period between the two synods. This process is itself an occasion of grace, where the bishops come together in an expression of collegiality, to follow a “path of spiritual and pastoral discernment”. The task is to “read the signs of God and of human history”.

The introduction ends (4) by outlining what will follow: “listening”, to reflect the reality of family life today; “looking”, focusing on Christ to see what revelation tells us about the “beauty, the role and the dignity of the family”; and “confronting the situation”. Here, crucially, the document reaffirms in a simple formula the Church’s commitment to the traditional definition of a family. The Synod wishes to discern how both Church and society can “renew their commitment to the family founded on the marriage between a man and a woman”.

There are only two questions for reflection relating to this section; indeed they apply to all sections of the Relatio Synodi:

Does the description of the various familial situations in the Relatio Synodi correspond to what exists in the Church and society today? What missing aspects should be included?

In the opening paragraphs of the question section, the Bishops’ Conferences are urged to continue their reflections in the spirit of the Synod, and “avoid, in their responses, a formulation of pastoral care based simply on an application of doctrine, which would not respect the conclusions of the Extraordinary Synodal Assembly”.

The Relatio Synodi reflects many of the different “familial situations” which exist in the Church and the world today, but there are several gaps. 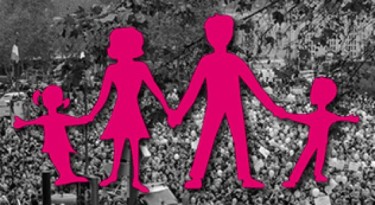 The Church’s teaching about openness to life is mentioned several times in the document, but the practical challenge of living the Church’s teaching is given less attention. More could be said about the nitty-gritty of the various methods of fertility awareness, as well as the challenge of explaining the reason for the Church’s teaching given that so many Catholics seem to be unaware of it. Large families are not always made to feel welcome, even at Mass, and that an anti-children mentality which exists in some parts of British society can also be evident within the Church community itself.

As a donor-conceived adult, I would have liked to have seen some mention made of donor conception and the different manifestations of families that this technique has brought into being. The Church’s teaching on donor conception is clear but donor-conceived children exist and continue to be brought into being so some mention of the reality and consequences of their situation would be welcome. It is, of course, through donor conception that same-sex couples have children, as well as infertile heterosexual couples, so there is much that could be said about these situations.

Again, the Church’s teaching on respect for life at all its stages is clear and unequivocal, but it would be helpful to hear more about how the Church can support families with a disabled child or children, as well as those facing long-term or terminal illness in their children.

The issue of education is not mentioned, although this is often a major worry for Catholic parents trying to raise their children in the faith. The role and availability of Catholic schools in supporting parents merits further discussion. As a home-educating parent, I would be interested to hear more from the Synod about how the Church can support this demanding but very rewarding way of educating children, especially since the number of children being home educated around the world continues to grow.

Although the Relatio does mention work, and specifically unemployment, I would welcome more discussion about the pressure of work and family life which many people face. This is something which the Pope has mentioned in his weekly audiences, specifically addressing fathers, but more on these increasing modern pressures would be very useful.

Finally, Pope Francis’s beautiful closing address to the Synod Fathers gives much cause for hope, as well as further insight into the process of discernment which the year between the Synods represents. He spoke of the Synod as a journey and mentioned the temptations along the way. Indeed, he sees these temptations as part of the movement of the spirits, the process of discernment. But he reassures the Church that the Holy Spirit is with her and she cannot err. She also, crucially, cares for all, saints and sinners alike:

And this is the Church, the vineyard of the Lord, the fertile Mother and the caring Teacher, who is not afraid to roll up her sleeves to pour oil and wine on people’s wound; who doesn’t see humanity as a house of glass to judge or categorize people. This is the Church, One, Holy, Catholic, Apostolic and composed of sinners, needful of God’s mercy. This is the Church, the true bride of Christ, who seeks to be faithful to her spouse and to her doctrine. It is the Church that is not afraid to eat and drink with prostitutes and publicans. The Church that has the doors wide open to receive the needy, the penitent, and not only the just or those who believe they are perfect! The Church that is not ashamed of the fallen brother and pretends not to see him, but on the contrary feels involved and almost obliged to lift him up and to encourage him to take up the journey again and accompany him toward a definitive encounter with her Spouse, in the heavenly Jerusalem.

This blog offers comments on news stories as they relate to the Catholic Church. For more information on Catholic Voices visit www.catholicvoices.org.uk
View all posts by catholicvoicesmedia →
This entry was posted in Synod2014, Synod2015. Bookmark the permalink.
Loading Comments...
Comment
×
%d bloggers like this: