The ‘Gay cake’ case: an analysis

Posted on June 9, 2015 by catholicvoicesmedia

A recent ruling from Northern Ireland has once again brought up the matter of religious-based objections to acts in the workplace — this time centred on the right of Christian family business not to bake a ‘gay cake’. The ruling will be appealed.

Whereas many cases have concerned refusals by employees to participate in actsions against their conscience, such as the Catholic midwives who refused to support abortions, Baptist care assistants unwilling to work on Sundays, or Evangelical marriage registrars demurring from solemnising same-sex civil partnerships, the Ashers Bakery case concerns the provision of goods by a business. 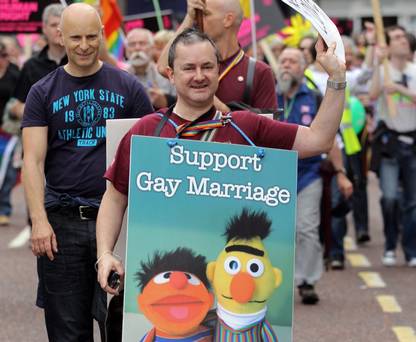 The case was brought by Gareth Lee, an activist associated with QueerSpace, whose aims include increasing “the visibility of the [LGBT] community in a positive manner and to counteract the disregard and negative images presented to the general public over the past centuries”. QueerSpace looked for battles like the one with Ashers, in order to “counteract the disregard” they perceived.

Mr Lee wanted a cake baked to mark a private event at the end of an anti-homophobia week in May 2014. He approached Ashers Bakery, a small, family-run enterprise with half a dozen outlets and 65 staff. It was founded by two Christians, Colin and Karen McArthur in 1992 who named it from a verse in Genesis: “Bread from Asher shall be rich, and he shall yield royal dainties” (49:20).

Mr Lee designed a cake with a colour picture of Bert and Ernie, two characters from Sesame Street used as QueerSpace’s logo, and the headline, “Support Gay Marriage”. After placing his order at the bakery, which was accepted without comment, Mr Lee was told by the bakery a few days later that it should not have taken the order, and he was offered a full refund. With the backing of the Equality Commission for Northern Ireland, he sued.

In his evidence, Mr Lee said that he thought that Asher refused his order on the grounds of both sexual orientation and political opinion: “It is not at all nice to think that a business will discriminate in the way that they provide services to me because I am gay or because I have political views about the need for legislation to support gay marriage or because I did not share their religious views”, said Lee, who submitted that “I was not asking [Ashers] to share or support my perceived political views on gay marriage…I was simply asking them to provide me with the service they advertise in their shops”.

Yet there is a non-sequitur here: plenty of non-gay people support same-sex marriage. 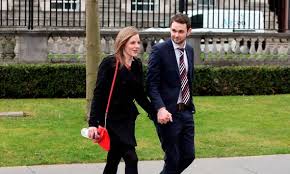 Thus Ashers argued that they could not be guilty of indirect discrimination, as they would have treated Mr Lee in exactly the same way had he not been gay. Again, the judge pointed to case law to argue that “if a comparator is required, the correct comparator is a heterosexual person placing an order a cake with the graphics either “Support Marriage” or “Support Heterosexual Marriage”. For what matters in discrimination cases like this one is not motive, but merely the fact that support for same-sex marriage must be “indissociable” from the sexual orientation of its supporters, whether or not supporters are homosexual or otherwise.

Regarding discrimination on the grounds of political orientation, Mr Lee claimed that his political opinion, as manifest on the cake, was unlawfully and directly discriminated against. In very similar reasoning to her findings on sexual orientation, the judge agreed. ‘Political opinion’ has a very wide meaning in Northern Irish law, and the judge found that Mr Lee’s opinion was protected, particularly “in the context of the political debate on same-sex marriage which was ongoing in Northern Ireland”. The defendants “must have known that [Mr Lee] supported gay marriage and/or he associated with others who supported gay marriage”, said the judge, and listed the reasons why, including the design of and message on the cake, the nature of QueerSpace and Mr Lee’s relationship to the organisation. 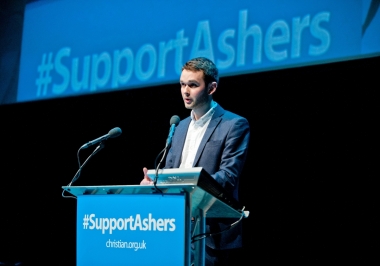 Daniel McArthur speaking at an event to support Ashers

In relation to political opinion, Ashers raised the defence that they did not want to

Promote and support [Mr Lee’s] political campaign for a change in the law of Northern Ireland so as to enable same sex marriage which objective is directly contrary to [the McArthurs’] religious faith and conscience. [The defendants are] entitled to refuse to create a polemical message which conflicts which their religious belief and conscience.

The judge did not consider that the relevant Northern Irish anti-discrimination measures unlawfully conflicted with the McArthurs’ human rights, particularly their rights to manifest their religion or belief, or their freedom of expression, as protected by Articles 9 and 10 respectively of the European Convention on Human Rights (Ashers, as a limited company, could not claim human rights).

When balancing these with Mr Lee’s rights of non-discrimination, she quoted extensively a passage of Lord Justice Laws (in McFarlane v Relate Avon Ltd [2010] IRLR 872) to the effect that whereas the law protects the right to hold and express a religious conviction, the mere fact that it is based on religious belief does not protect the substance or content of the right.

The right to disagree with same-sex marriage on religious grounds, and to espouse that view, was categorically different, thought the judge, to the right to express that view by rejecting the cake order. 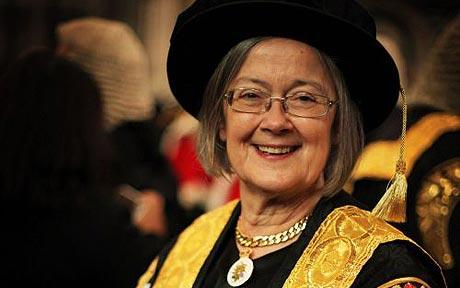 The McArthurs took a different tack: if the substantial right to act a religious view was not unqualifiable, then it should only be qualified to the extent that the qualification was the least restrictive that it could be, and that some reasonable accommodation should be made. Of course, in return the right of sexual orientation had to be reasonably accommodated, and the judge found in Mr Lee’s favour on this point [91], citing from a judgment by Lady Hale in the UK Supreme Court about the need for sexual orientation to be expressed with a partner, “real or imagined”, as a “core component of a person’s identity which requires fulfilment through relationships with others of the same orientation”.

The judge also found that the McArthurs’ right to freedom of expression was not impinged, in that they were not being required to support, promote or endorse any viewpoint [95]. She ordered that Ashers and the McArthurs pay £500 for injury to Mr Lee’s feelings. 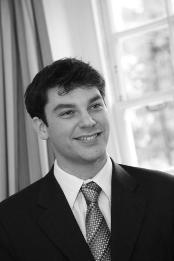 As one barrister commentator, Alasdair Henderson, noted, the width of protected ‘political opinion’ in Northern Ireland is a wide one, in order to counter sectarian discrimination between unionists and nationalists.

It is regrettable that English law, following European jurisprudence, equates support for same-sex marriage with sexual orientation, and this principle risks becoming embedded. It stems from an effort to find factual bases for assessing discrimination without looking at the motivation for that discrimination (instigated for fear that discriminators would presumably hide their motivations behind other reasons). Some commentators think it will be hard for the courts to step back from this position, and will require the Supreme Court to make fine distinctions from some recent judgments, although Aidan O’Neil QC, a leading specialist in this area of law, has advised that Mr Lee’s lawyers have “misunderstood” the case law.

Alasdair Henderson’s inescapable conclusion, echoed in many quarters, is that

This judgment leaves little or no room for freedom of conscience in business. The analysis used by the judge would mean a Muslim baker would have to bake a cake with a cartoon of the prophet Mohammed on it and the slogan ‘Je suis Charlie’. An atheist printer would have to print leaflets proclaiming ‘the fool says in his heart “There is no God”’. A gay graphic designer would have to accept a contract to design a flyer saying ‘why sodomy is a sin’. None of those situations seem right.

Where does this leave individual conscience? Alasdair Henderson points out how

It is very odd that the judge felt able to tell the Defendants that they were not being asked to promote or support same-sex marriage, without properly explaining why and despite their deeply held view that they were. This completely fails to understand the nature of conscience, which is unique to each individual. Many people may have been happy with baking the cake, even if they personally opposed gay marriage, but the McArthurs weren’t. Unless the judge doubted their sincerity (which she didn’t), there is no reason for her to have completely dismissed their conscientious objection.

He proposes a safeguard in cases like this one:

Couldn’t the courts simply ask the following question: would the service or product which you are being asked to provide involve promoting, supporting or participating in a cause you do not agree with? If yes, you should be able to refuse on grounds of conscience. If no, you should provide the product or service, regardless of who the customer is.

Although many qualifications to this test would be needed in practice (e.g. it does not specify whether some conscientious beliefs are beyond the pale, nor whether beliefs should be sincerely held), it is very appealing to replace the current mish-mash of laws – case law derived from common law principles, EU anti-discrimination measures which were designed to further the free movement of people, and human rights – with a single, less complicated formula.

There was some discussion over the reasonable accommodation of the McArthur’s religious beliefs, mainly looking at Canadian cases where, for instance, a company owner who unlawfully discriminated against homosexuals was nevertheless not required to print material of a nature that could reasonably be considered in direct conflict with the core elements of his religious beliefs.

Reasonable accommodation in the Ashers case, meaning finding a reasonable and practicable way to protect religious freedoms unless it was impossible to do so, would have looked at the context in which Ashers were operating: plenty of other bakeries would have taken Mr Lee’s order and delivered within time.

It would have been impossible for Ashers to have taken another course of action that satisfied Mr Lee and their own conscience whereas, putting the boot on the other foot and considering his right to the reasonable accommodation of his sexual orientation, Mr Lee would simply have been inconvenienced in having to go elsewhere. The freedom to manifest his views on same-sex marriage was amply catered for by the cultural and political climate in Ulster.

As with Christian hoteliers and B&B owners, this case is one of a static establishment, offering a service with minor restrictions, which does not target any class of person outside the confines of the service they offer, operating within a market place that condones and makes widespread provision for what was once a minority position.

[Peter Smith is a lawyer]