Francis in South America: building a culture of encounter from the periphery

Posted on July 3, 2015 by catholicvoicesmedia 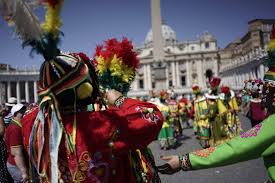 [Austen Ivereigh] Pope Francis’s intense 8-day apostolic journey to three poor South-American countries, which begins this Sunday, will be one of his most significant yet — a chance to evangelize from the peripheries in his own continent.

Although not the first visit to Latin America as pope — he travelled to Rio de Janeiro, Brazil, in July 2013 for World Youth Day — it is his first to Spanish-speaking South America. Just as he went to Turkey, Albania and Bosnia before visiting large countries in Europe, he has chosen Ecuador, Bolivia and Paraguay before the wealthier nations of South America — Argentina, Chile, and Uruguay — which he is expected to visit next year, as well as, at some point, Peru, Venezuela and Colombia.

The trip (itinerary here) will involve two days in each country, and in each country visiting two places: the capital and one other. He will arrive in the Ecuadorian capital, Quito, on Sunday, before going to Guayaquil, on the ocean, on Monday morning, before returning to the capital. On Wednesday he will fly to La Paz, the Bolivian capital, before going in the afternoon to Santa Cruz, in the Bolivian lowlands, where he will stay. On Friday he will go to Asunción, the Paraguayan capital, and the next day say Mass at the shrine of the Virgin of Caacupé, about 40 kilometres away.

The agenda is packed with liturgies, meetings with civil society leaders, visits to “places of pain” — an elderly home, prison, and paediatric hospital — as well as meetings with authorities, time spent in a slum, and hosting a huge world meeting of popular movements. He is expected to give 22 speeches and homilies, and will speak in Spanish throughout — with smatterings of indigenous languages. Given his propensity for spontaneity, however, no one is betting on Francis either giving the text he has been prepared, or limiting himself to that number.

What Ecuador, Bolivia and Paraguay have in common is that they are poor, geopolitically unimportant, yet are rich in geography and culture. His journey next week will take him from sea level (Guayaquil, in Ecuador) to the world’s highest airport (El Alto in Bolivia, which is at 4,100m) as well as to the subtropical lowlands of Santa Cruz, Bolivia, and Asunción, Paraguay. All three countries have large indigenous and mestizo populations: in Ecuador and Bolivia are millions of Quechua and Aymara speakers who lived under the Inca empire before the arrival of the Spanish in the sixteenth century, while Paraguay is the homeland of the Guaraní-speaking people, famously organized by the Jesuits in the great ‘Reductions’ of the seventeenth and eighteenth centuries.

Pope Francis knows all three countries from his time as a Jesuit provincial in Argentina. Bolivia and Paraguay were at one point part of the same Jesuit province as Argentina, and he used to send students to the Jesuit ‘Javier’ college in Guayaquil, Ecuador, where he will be having lunch on Monday. As cardinal archbishop, Jorge Mario Bergoglio was very close to the Paraguayan, Bolivian and Ecuadorian migrants who make up the majority of the slum dwellers in the Buenos Aires villas miseria.

A legacy of conflict

All three countries are coping with the legacy of wars and border conflicts. Paraguay, which was a relatively important country in the early nineteenth century, was dismembered and shrunk to a third of its size after neighboring Argentina, Brazil and Uruguay united to crush it in the so-called War of the Triple Alliance of the 1860s. Pope Francis has spoken in the past of the way the country lost nine-tenths of its male population, and only survived because of its women. Paraguay later went to war with Bolivia in the 1930s over the Chaco, while Bolivia, for its part, lost access to the sea following the War of the Pacific with Chile. Both of these last two border conflicts remain, as does Ecuador’s longstanding frontier dispute with Peru. Pope Francis is likely to use this visit as an opportunity to give messages about Latin-American continental unity — a theme close to his heart.

All three nations are deeply Catholic, with overwhelming Catholic majorities, and are also highly practising — Paraguay, for example, has a Massgoing population of over 70 per cent. Yet pre-Columbian beliefs are also strong, especially in Ecuador and Bolivia, where attempts to re-evaluate Inca cultural and religious legacies are often accompanied by a left-wing, anti-colonial discourse. Evo Morales, who is serving  a third term as Bolivia’s president, has said in the past that he is only a Roman Catholic in order “to go to weddings”, and when asked if he believed in God, responded that “I believe in the land. In my father and my mother. And in Cuchi-Cuchi”. Yet he has built a relationship with Pope Francis in their shared efforts to secure better conditions for landless workers, just as Rafael Correa — Ecuador’s Quechua-speaking socialist president — has given speeches at the Vatican on the moral dimension of climate change.

One of the Pope’s concerns in this visit will be to show that the Gospel — whatever the mistakes of Spanish missionaries in the past — builds and protects cultures, as the Jesuits did among the Guaraní, rather than displacing them. The theme of mission will be strong on this visit, especially at the big Mass at the Bicentennial Park in Quito, Ecuador, on Tuesday, where crowds of over a million are expected. The Mass will involve many different ethnic groups, who will be represented in the Offertory, and the liturgy will be strong on Aymara and Quechua, even including music composed for the funeral of the last Inca emperor, Atahualpa, who was tricked by the conquistadors into surrendering Cuzco. In Paraguay, the liturgies will have plenty of Guaraní, and music from the age of the Jesuit Reductions will be played at the meeting at the López palace on Friday.

Two documents will underpin the trip. The visit is being framed, above all, by Evangelii Gaudium, Pope Francis’s apostolic exhortation of November 2013, in which the theme of joy and mission and evangelization are paramount — as reflected in the mottos for the visits chosen by each country. The other key document is the one that came out of the Latin-American bishops’ meeting in Aparecida, Brazil, in 2007, in which evangelizing through charity, missionary discipleship and concern for the poor and the environment are key concerns. Another recurrent theme of the visit will be mercy, which Pope Francis has chosen for next year’s Jubilee. In his video message to the three countries, Pope Francis spoke of wishing to “bring to you the tenderness and caress of God, our Father, especially to your children most in need, the elderly, the sick, the imprisoned, the poor, to those who are victims of this throwaway culture.”

One of the most significant themes of the Aparecida document — as result especially of the contribution of Argentine theologians coordinated by Cardinal Bergoglio — was popular religiosity, which Francis (unlike many liberation theologians in the 1970s) sees as the place where Christ encounters the poor, often through traditional Marian devotions. He will make a private visit to the image of the Sorrowful Mother in Quito, and will address clergy and religious at the shrine of El Quinche.  In each of the countries, Francis will be meeting “God’s holy faithful people” – the ordinary poor — at the shrines, the week framed by huge Masses at the Divine Mercy sanctuary in Guayaquil on Monday and the Virgin of Caacupé in Paraguay on Saturday. (The latter is close to Argentina, and therefore will attract many of the Pope’s compatriots). The combination of Francis’s extraordinary popularity, his connectedness with the poor, and the bright colours and costumes of the indigenous peoples in all three countries, means that the Pope’s “people time” will be must-watch TV — especially at the vast Mass ending his visit on Sunday in Paraguay.

Another theme will be the “culture of encounter”, the phrase connected with Pope Francis’s attempts to build a pluralistic politics of inclusion in countries where corruption and populism often drive out policies geared to the common good. In the meetings with civil society leaders — at the San Francisco church in Quito, in the cathedral in La Paz, and in the San José school in Asunción — Francis is likely to focus on the foundations of a renewed Latin-American politics. He is also likely to use these meetings — as well as the speeches to the dignitaries — to remind his audiences of Latin America’s joint continental destiny, the dream of the patria grande, or greater fatherland.

With the the suffering, the young, and the disenfranchised

The visits to the places of pain and poverty will also form an essential backdrop to some of the Pope’s key messages. The nursing home of the Missionaries of Charity in Quito, the notoriously large and violent prison of Palmasola (with 5,000 inmates, one of the largest in the world) in Santa Cruz, and the visit to sick children at the Niños de Acosta Nu in Asunción will be opportunities for allowing the suffering to speak — and Francis to listen to the experience of pain. His visit to the large riverside slum of El Bañado in Asunción will also be a significant moment, in which he will draw attention to some of the themes in Laudato Si’ about the fragility of the poor and the planet.

These are young populations for whom education is a vital commodity, and the Church is a key player. Expect important messages, therefore, at the Pontifical Catholic university in Quito, the Don Bosco school in Santa Cruz, and the meeting with young people at the Costanera in Paraguay.

With the popular movements 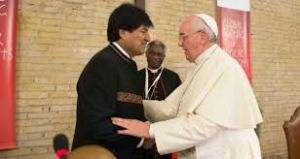 One of the most significant and unusual moments of the trip will be on Thursday afternoon in Santa Cruz, when Pope Francis will lead the Second World Meeting of the Popular Movements at the Expo Feria. The first was in October 2014, when Francis gave one of his most challenging speeches. Among those attending will be the cartoneros, the garbage workers whom Francis was close to in Buenos Aires, as well as ragpickers from the slums of India, workers from South American cooperatives, even indigent can-and-bottle collectors from New York. There, along with Evo Morales — attending in his role as leader of a social movement, rather than as president — Francis will likely repeat his call for the poor and powerless to organize to secure what he has called the “sacred rights” of land, housing and work.

“He believes in the organization of the poor by their own kind and struggling for social justice,” said Juan Grabois, an Argentine human rights activist who is organizing the meeting. “He wants to hear what they want to say, instead of listening only to political leaders.” 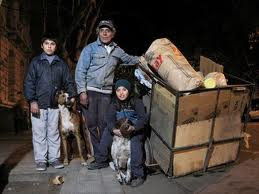 The Meeting of Popular Movements will almost certainly provide an opportunity for Pope Francis to bring home his Laudato Si’ messages, applauded by crowds of the very people his encyclical describes as impacted by the consumerism of the wealthy world.

Here we will see Pope Francis as modern popes have never been seen: as community organizer, leader of the disenfranchised, and slum prophet.

Briefing press on the visit, Vatican spokesman Fr Lombardi said the meeting would likely produce a document that Francis will take with him to the United States, and which he will no doubt refer to in his addresses to the UN and to Congress.

Pope Francis’s visit to the margins, in other words, will produce challenging messages for the powerful and privileged, as well as hope to the poor.

This blog offers comments on news stories as they relate to the Catholic Church. For more information on Catholic Voices visit www.catholicvoices.org.uk
View all posts by catholicvoicesmedia →
This entry was posted in Pope Francis, South America. Bookmark the permalink.
%d bloggers like this: