Posted on October 24, 2015 by catholicvoicesmedia 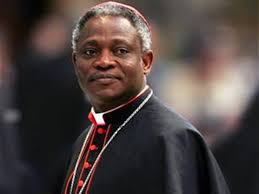 The following is the text of the brief synod address by Cardinal Peter Turkson, president of the Pontifical Council for Justice & Peace, in response to paragraphs 142 and 143 of the Instrumentum Laboris relating to ‘The Home and Integral Ecology’.

For Adam, God prepared a garden which was to become the home of the first couple, and which Adam was to till and keep. With the birth of Cain and then Abel, his brother, the garden/home would also be the home of sons and the setting of brotherhood. And so, the home (oikos) is not only the convergence point of oikologia (keeping the earth) and oikonomia (tilling the earth), but also the locus of brotherhood (children of the same womb… a-delphos; hence equal in dignity, rights, with the endowments of their garden-home for their common good). Here are the basic elements of integral ecology and its inseparable relationship with the Family!

The ethical or moral import of ecology and economy for the family is undeniable. We recognize that, in our days, the family can easily suffer a three-fold or a linked vulnerability from the viewpoint of the economy (insufficient salary, joblessness, insecurity, inequality, trafficking and slavery – briefly, the lack of decent work), from the viewpoint of ecology (insufficient access to water, hunger and malnutrition, wasted lands or fisheries and climate-related disasters – briefly, environmental degradation and the throw-away culture) and, as a result of one or both situations, also from the view point of a home (homelessness or precarious housing, without which it is difficult to talk about a family ). The 3 “Ts” of Popular Movements!

“We must never forget that, because there was no room in the inn, Jesus was born in a stable; and that his family, persecuted by Herod, had to leave their home and flee into Egypt. Today there are so many homeless families, either because they have never had one or because, for different reasons, they have lost it. Family and housing go hand in hand.”

The confluence of two or more of these “vulnerabilities” renders people excluded; and a common feature of the various forms of exclusion, is that people and their situations become invisible: invisible not because they lose corporality. No! invisible because the larger society, Government, the dominant culture, the media, the major institutions, including the Church, lose sight of them, pay no attention to them and disregard their presence, worth and rights.

Thus, when under pressure from expanding agro-industry, rural populations are displaced from the land, it is of no concern for the authorities that the family disintegrates and the children scatter. Similarly, a woman who works as a street vendor, earning the minimum to support her children, cannot “afford” to stop work for another pregnancy. A woman in a clandestine textile factory is terrified of being fired if she asks for maternity leave. In both cases, they are under enormous pressure to abort.

Yet, the family is at the origins of the most basic, positive or constructive attitudes and habits of life in society: the place where we learn basic facts of life (cf. Laudato si’ §213) such as:

The Evangelization of the family needs to advert to the profound interconnection of all that God has made: “We have only one heart… We can hardly consider ourselves to be fully loving if we disregard any aspect of reality” (Laudato si’ §92).

This blog offers comments on news stories as they relate to the Catholic Church. For more information on Catholic Voices visit www.catholicvoices.org.uk
View all posts by catholicvoicesmedia →
This entry was posted in Catholic Social Teaching, Laudato Si, Synod2015, Uncategorized. Bookmark the permalink.
%d bloggers like this: