‘Spotlight’: a reminder of what had to change

Posted on November 18, 2015 by catholicvoicesmedia 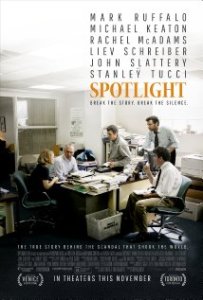 [From Christopher White in New York] This month’s US release of the film Spotlight — the UK release will not be until January — is a time for Catholics to recall the devastation that sexual abuse in the Church has caused.

But in telling the story of the Boston Globe’s groundbreaking exposure of the crisis in January 2002, the movie (reviewed by The Guardian here) is also a moment to reflect on the media’s service in exposing the crisis and making clear the need for urgent reform.

Reflecting on the ten-year anniversary of the Globe’s coverage back in 2011, Boston Cardinal Sean O’Malley said that “the media helped make our Church safer for children by raising up the issue of clergy sexual abuse and forcing us to deal with it.”

When the Globe first began its reports — the story was never off its front page for six months — Catholics and non-Catholics alike were rightly outraged at the revelations both of abuse and its cover-up by clergy and bishops whose very institutional mission is to the vulnerable.

Although it was hard to see at the time, the scandal was in a backhanded way a recognition of the significance of the Catholic Church in public life, as New York Times columnist Ross Douthat wrote in 2010.

In a column in last week’s Washington Post, I made the case that the Church’s response to the Globe’s revelations has made it one the safest institutions for minors today.

I pointed out that Pope Francis has built on the reforms of his predecessor in the creation of the Pontifical Commission for the Protection of Minors, which advises the Holy See on how to strengthen its commitment to safeguarding. The committee is made up of survivors of sexual abuse, psychologists and other experts who are tasked with both pastoral care and maintaining accountability for those in authority (see CV Comment here). This past June, following the Commission’s recommendations, Francis doubled down on reform efforts by establishing a special tribunal explicitly to discipline negligent bishops.

Pope Francis knows all too well that the ongoing work of reform will not be aided by mere public relations exercises, but a real change in practice. That’s what motivated him to approve a 2014 investigation of Bishop Robert Finn of Kansas City, Missouri for failing to report child abuse. Less than a year later, Finn resigned. Following his June 2015 establishment of tribunal for disciplining delinquent bishops, Archbishop John C. Nienstedt and auxiliary Bishop Lee Piche of Minnesota, both of whom were facing investigation for mishandling abuse cases, resigned.

During his papal visit to the United States in September, Francis offered some of his harshest words about the abuse crisis just moments after speaking with victims of sexual abuse. He told the US bishops in Philadelphia:

I continue to be ashamed that persons charged with the tender care of those little ones abused them and caused them grave harm. I deeply regret this. God weeps. The crimes and sins of sexual abuse of minors may no longer be kept secret; I commit myself to ensuring that the Church makes every effort to protect minors and I promise that those responsible will be held to account.

While the work of the reform is not yet complete, Francis is moving quickly to fast track internal proceedings and ensure that the Church does not rest until any of its predatory priests are permanently removed from ministry and that better systems are created to prevent them from arriving there in the first place.

Spotlight does not tell the story of what happened after the crisis of 2002: the reform that it triggered, nor the wholesale conversion of an institution’s culture and practices. But it reminds us of what led to it — and those are lessons we cannot stop learning.

This blog offers comments on news stories as they relate to the Catholic Church. For more information on Catholic Voices visit www.catholicvoices.org.uk
View all posts by catholicvoicesmedia →
This entry was posted in abuse. Bookmark the permalink.

1 Response to ‘Spotlight’: a reminder of what had to change