Pope to Davos: don’t let the poor pay the price of the ‘fourth industrial revolution’

Posted on January 21, 2016 by catholicvoicesmedia

Cardinal Peter Turkson, president of the Vatican’s Justice and Peace Council, yesterday afternoon read a letter from Pope Francis addressed to the president of the World Economic Forum meeting in Davos, Switzerland.

The theme of the meeting is “Mastering the Fourth Industrial Revolution”, a reference to the massive technological breakthrough the world is currently experiencing. According to the WEF website, the ‘Fourth’ Industrial Revolution follows on from the first three: steam-power, electric power, and digital. The new, coming revolution “is one characterized by a fusion of technologies that is blurring the lines between the physical, digital, and biological spheres.”

In his message the Pope reminds the world’s business and political leaders that while technological progress has brought about unprecedented possibilities for development, its power needs to be harnessed to the common good. The danger is that technology is racing ahead of moral awareness, and that — as he documents in Laudato Si’ — producing the illusion and desire for unbounded wealth and economic growth. 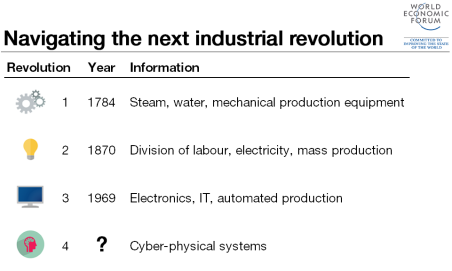 The message calls especially for leaders to attend to the risks to the poor of mass unemployment produced by robotics, and calls for the new power to be harnessed “to build inclusive societies based on respect for human dignity, tolerance, compassion and mercy.”

Before all else, I would like to thank you for your gracious invitation to address the annual gathering of the World Economic Forum in Davos-Klosters at the end of January on the theme: “Mastering the Fourth Industrial Revolution”. I offer you my cordial good wishes for the fruitfulness of this meeting, which seeks to encourage continuing social and environmental responsibility through a constructive dialogue on the part of government, business and civic leaders, as well as distinguished representatives of the political, financial and cultural sectors.

The dawn of the so-called “fourth industrial revolution” has been accompanied by a growing sense of the inevitability of a drastic reduction in the number of jobs. The latest studies conducted by the International Labour Organization indicate that unemployment presently affects hundreds of millions of people. The financialization and technologization of national and global economies have produced far-reaching changes in the field of labour. Diminished opportunities for useful and dignified employment, combined with a reduction in social security, are causing a disturbing rise in inequality and poverty in different countries. Clearly there is a need to create new models of doing business which, while promoting the development of advanced technologies, are also capable of using them to create dignified work for all, to uphold and consolidate social rights, and to protect the environment. Man must guide technological development, without letting himself be dominated by it!

To all of you I appeal once more: “Do not forget the poor!” This is the primary challenge before you as leaders in the business world. “Those who have the means to enjoy a decent life, rather than being concerned with privileges, must seek to help those poorer than themselves to attain dignified living conditions, particularly through the development of their human, cultural, economic and social potential” (Address to Civic and Business Leaders and the Diplomatic Corps, Bangui, 29 November 2015).

We must never allow the culture of prosperity to deaden us, to make us incapable of “feeling compassion at the outcry of the poor, weeping for other people’s pain, and sensing the need to help them, as though all this were someone else’s responsibility and not our own” (Evangelii Gaudium, 54).

Weeping for other people’s pain does not only mean sharing in their sufferings, but also and above all realizing that our own actions are a cause of injustice and inequality. “Let us open our eyes, then, and see the misery of the world, the wounds of our brothers and sisters who are denied their dignity, and let us recognize that we are compelled to heed their cry for help! May we reach out to them and support them so they can feel the warmth of our presence, our friendship, and our fraternity! May their cry become our own, and together may we break down the barriers of indifference that too often reign supreme and mask our hypocrisy and egoism!” (Bull of Indiction of the Extraordinary Jubilee of Mercy, Misericordiae Vultus, 15).

Once we realize this, we become more fully human, since responsibility for our brothers and sisters is an essential part of our common humanity. Do not be afraid to open your minds and hearts to the poor. In this way, you will give free rein to your economic and technical talents, and discover the happiness of a full life, which consumerism of itself cannot provide.

In the face of profound and epochal changes, world leaders are challenged to ensure that the coming “fourth industrial revolution”, the result of robotics and scientific and technological innovations, does not lead to the destruction of the human person – to be replaced by a soulless machine – or to the transformation of our planet into an empty garden for the enjoyment of a chosen few.

On the contrary, the present moment offers a precious opportunity to guide and govern the processes now under way, and to build inclusive societies based on respect for human dignity, tolerance, compassion and mercy. I urge you, then, to take up anew your conversation on how to build the future of the planet, “our common home”, and I ask you to make a united effort to pursue a sustainable and integral development.

As I have often said, and now willingly reiterate, business is “a noble vocation, directed to producing wealth and improving our world”, especially “if it sees the creation of jobs as an essential part of its service to the common good” (Laudato Si’, 129). As such, it has a responsibility to help overcome the complex crisis of society and the environment, and to fight poverty. This will make it possible to improve the precarious living conditions of millions of people and bridge the social gap which gives rise to numerous injustices and erodes fundamental values of society, including equality, justice and solidarity.

In this way, through the preferred means of dialogue, the World Economic Forum can become a platform for the defence and protection of creation and for the achievement of a progress which is “healthier, more human, more social, more integral” (Laudato Si’, 112), with due regard also for environmental goals and the need to maximize efforts to eradicate poverty as set forth in the 2030 Agenda for Sustainable Development and in the Paris Agreement under the United Nations Framework Convention on Climate Change.

Mr President, with renewed good wishes for the success of the forthcoming meeting in Davos, I invoke upon you and upon all taking part in the Forum, together with your families, God’s abundant blessings.

This blog offers comments on news stories as they relate to the Catholic Church. For more information on Catholic Voices visit www.catholicvoices.org.uk
View all posts by catholicvoicesmedia →
This entry was posted in Pope Francis, Pope Francis address. Bookmark the permalink.

1 Response to Pope to Davos: don’t let the poor pay the price of the ‘fourth industrial revolution’