Republican Catholics in US repudiate Trump and all his works

Posted on March 8, 2016 by catholicvoicesmedia 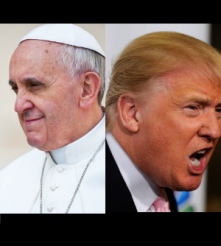 [Austen Ivereigh] Donald Trump is “manifestly unfit to be president of the United States”, has driven politics to new depths of vulgarity, plays on racial fears, and favours torture while giving little indication that he is pro-life, defends religious freedom or the principle of limited government.

So say traditionally Republican Catholic leaders in an “Appeal to Our Fellow Catholics And to All Men and Women of Goodwill” published in the influential conservative journal National Review. The journal’s online editor is Kathryn Jean Lopez, who is one of the founders of Catholic Voices USA, together with another of the signatories, Ann Corkery.

It begins by making a list of reasons for Catholics supporting the Republican Party — legal protection for unborn children, religious freedom, rebuilding marriage culture, and “re-establishing constitutional and limited government, according to the core Catholic social-ethical principle of subsidiarity.” (The list does not include immigration, the death penalty and gun control, areas where Democrats have traditionally been more closely aligned with Catholic social teaching). While acknowledging “frustrations along the way”, Professors George and Weigel insist that “it seemed possible that further progress in defending and advancing these noble causes was possible through the instrument of the Republican party” but warn that this optimism is now imperiled by the ascent of Trump.

George Weigel is Distinguished Senior Fellow of the Ethics and Public Policy Center.

While agreeing that there are reasons to be angry with the political establishment, George and Weigel say that other Republican candidates “are far more likely than Mr. Trump to address these concerns, and who do not exhibit his vulgarity, oafishness, shocking ignorance, and — we do not hesitate to use the word — demagoguery”, adding: “We urge our fellow Catholics and all our fellow citizens to reject his candidacy for the Republican presidential nomination by supporting a genuinely reformist candidate.”

“A person who thinks only about building walls, wherever they may be, and not building bridges, is not Christian,” said Pope Francis on the papal plane returning from Mexico, in response to a reporter’s question about Trump’s anti-immigration proposal.