Posted on June 10, 2016 by catholicvoicesmedia 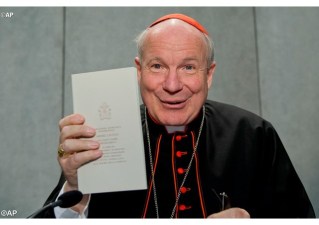 Cardinal Schönborn of Vienna holds up a copy of Pope Francis’s document on family love, Amoris Laetitia. The new dicastery will be responsible for promoting and implementing its insights.

[From Daniele Palmer in Rome] Two new Vatican bodies announced last weekend suggest Pope Francis may seek to abolish the distinction between curial departments that legislate and those that advise.

In its current constitution, a Holy See department — or “dicastery” — is either a congregation that makes rules and decisions on the pope’s behalf or a pontifical council which advises the pope. Congregations are headed by prefects, and councils by presidents.

But a press briefing by the Vatican spokesman, Fr Federico Lombardi, earlier this week suggests that the nine-member Council of Cardinal Advisers (C9) might create new “hybrid” dicasteries, which combine elements of both.

The C9 is a group of nine cardinals created by Pope Francis in September 2013 to reform the Roman Curia. Amongst its members are the prefect of the Secretariat for the Economy, George Pell, and the Secretary of State, Pietro Parolin.

Last week the C9 announced two new dicasteries: one for the Laity, Family and Life and another for Charity, Justice and Peace, which together replace six current councils. The Dicastery for Laity, Family and Life, which has been formally created, subsumes the two existing councils for the laity and the family, while Charity, Justice and Peace — which has been recommended by the C9 but not yet created — replaces four existing councils: for justice and peace, migrants and itinerants, healthcare workers, and the Pope’s charity arm, Cor Unum.

For the moment, the two new dicasteries have not been defined either as councils or as congregations. Fr Lombardi said he did not know if there would be a final “qualification” of the new bodies as either one or the other, and said they could have “functions that are halfway between those of providing suggestions and of governing.”

The lack of a decision on the precise nature of the new dicastery was “intentional”, Fr Lombardi added.

The distinction between congregations and councils has long been criticized as archaic, and risks creating the impression that the Vatican regards lay people and justice issues as less important than bishops, priests and religious, each of which has its own congregation.

The C9 is also known to want to simplify and reduce the number of Vatican departments. These new “hybrid” dicasteries may well represent the model for future changes coming down the tracks.

The heads of the new dicastery for Laity, Family and Life, which comes into being on 1 September, will include a prefect  — suggesting that it has legislative power —  but also a secretary who can be a lay person, either a man or woman, and three lay under-secretaries.

In other words, the new format offers unprecedented new scope for including laity at the highest levels of the Vatican —another stated aim of the C9 reform.

The statutes of the Dicastery of the Laity, Family and Life, released Saturday, say the new department will promote “the pastoral care of the family, maintain the dignity and basic good of the sacrament of marriage, favour the rights and responsibilities of the Church in civil society” in order that “that the institution of the family may always fulfill its proper functions both within the Church and society.”

The dicastery will also pay “special attention to the particular mission of the lay faithful to permeate and perfect the order of temporal reality.”

The statutes have been approved ad experimentum, i.e. on a temporary basis, allowing the Vatican to live with the new set-up but make changes further down the line.

For that reason, experts say, it’s too early to say if these new departments are really the template for future ones. Fr Robert Gahl, professor of philosophy at the University of the Holy Cross in Rome, told me: “The new law and the new office, both created last Saturday, offer clues, but not a definitive answer —not yet.”

[Daniele Palmer is currently interning as a journalist in Rome]

This blog offers comments on news stories as they relate to the Catholic Church. For more information on Catholic Voices visit www.catholicvoices.org.uk
View all posts by catholicvoicesmedia →
This entry was posted in curial reform. Bookmark the permalink.
Loading Comments...
%d bloggers like this: