Posted on June 18, 2016 by catholicvoicesmedia

A debate by leading Catholics on whether Britain should vote to stay in or abandon its membership of the European Union led a 160-strong audience in central London last week to switch a predominantly ‘Remain’ position to a majority urging ‘Leave’.

But after the Catholic Voices-hosted debate, chaired by Ed Stourton, had considered the motion that ‘This House believes Catholic values are best served by the UK remaining in the European Union’, a 44 per cent majority favoured Leave while Remain went down to 39 per cent, leaving 17 per cent still undecided.

The debate was opened by Bishop John Wilson, an auxiliary of Westminster, and the audience and speakers were welcomed by Dr Austen Ivereigh, Catholic Voices coordinator. Ivereigh said the debate was  intended not only to help Catholics discern the right way to vote on Thursday, but also to show that real values are at stake, rather than just self-interest.

Tom Tugendhat, Conservative MP for Tonbridge and Malling, spoke for Remain, together with Liberal-Democrat peer, Baroness Julie Smith. Leave was represented by Gisela Stuart, who is Labour MP for Birmingham Edgbaston and chair of the Leave campaign, and by Tim Stanley, historian and writer for the Daily Telegraph.

Tughendhat and Smith pointed to the extraordinary success of the EU in forging unity and solidarity, arguing that cooperation enabled Britain to achieve far more in the world, and that leaving would significantly harm both Europe as well as the UK’s internationalist calling. 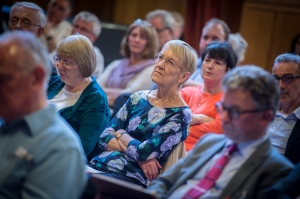 Stuart and Stanley however said the EU had violated the core principles of subsidiarity and solidarity by forcing the creation of a centralist model of federalism that lacked the consent of people, harmed local democracy and forced weaker economies into recession through austerity.

The debate, which was reported in The Tablet here, was strikingly good-natured, with both sides regretting the insults and hyberbole that has characterised the Referendum campaign. Both sides were critical of Nigel Farage’s UKIP party, for example, saying that Britain needs and must continue to accept migrants.

You can watch the debate interventions here.

This blog offers comments on news stories as they relate to the Catholic Church. For more information on Catholic Voices visit www.catholicvoices.org.uk
View all posts by catholicvoicesmedia →
This entry was posted in EU Referendum, Europe, Uncategorized. Bookmark the permalink.
Loading Comments...
%d bloggers like this: