Posted on July 9, 2016 by catholicvoicesmedia 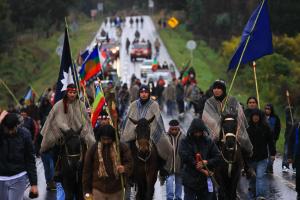 Pope Francis’s prayer intention for the month of July is for “respect for indigeneous peoples” (see ‘the Pope Video’) who make up about five per cent of the world’s population (370m) yet a third of all rural poor. Their identity and livelihoods are increasingly threatened by violence, marginalization, forced relocation, and denial of land rights. In Chile, the largest indigenous group, the 1.4m ‘Mapuche’, have involved in a lengthy battle with the state of Chile, businesspeople and farmers over ancestral lands, leading to protests that in the past months have even led to churches being burned (see Crux). An advisor to Catholic Voices Chile here offers a background briefing on the issue.

[Sebastián Donoso] When the Spanish began their sixteenth-century quest to conquer the narrow strip between the Andes and the Pacific, moving south from Peru through the Atacama Desert to the fertile central valleys and down to Cape Horn and the Antarctica, they encountered nearly 1 million indigenous people inhabiting the land. Some 480 years later, roughly 10 per cent of the country’s 17 million population self-identifies as indigenous, while most of the remaining 90 per cent (except for a minority of recent immigrants) are of mixed ancestry.

A majority of those who claim to be indigenous belong to the so-called Mapuche people, the word meaning literally “people of the land”. Though the Mapuche are now scattered along and across the country, and live mainly in urban areas, in 1536 they occupied the centre-south region known now as ‘Araucanía’, where a third of them still cling to the land.

The wild rainforests of Araucanía at that time were the scenes of a fierce struggle between the Mapuche and the Spanish conquerors for control of the land. The Mapuche never surrendered to the Spanish, but this did not not prevent the two from developing trade, diplomatic relations, and from intermarrying.

A priest with Mapuche in the past

When Chile gained independence from Spain 300 years later, in 1818, the territory inhabited by the Mapuche was known as the ‘frontier’ and only formally incorporated to Chile decades later, in 1883, following military occupation.

What came afterwards is at the roots of present-day tensions. Starting around 1860, the Government of Chile encouraged a policy of colonization of the southern territories – Araucanía among them- which brought both Chilean and foreign (mainly German) settlers with their families to the region. The Mapuche were given surface land titles only to the areas they were able to demonstrate they had continually occupied. The remaining lands — a good deal of them to be clear — were declared public land and handed to the settlers. Military occupation in the 1880s enforced and speeded up this process of land distribution, which was largely over by 1930.

More than a hundred years later, that wound is still open and bleeding. The 1990s saw the first signs of violence against the landowners descended from settlers, both Chilean and foreign. Forestry companies, who had acquired most of their properties in the 1970s-80s, were also targeted by attackers, and would become the main victims of this violence.

Protestor draped in a Mapuche flag

The growth of the Mapuche protest was rooted in poverty rates that were among the highest in the country. The indicators of health, education and labour participation were also extremely low among the Mapuche. At the same time, a new international framework of law recognising indigenous rights was expressed in Chile’s Indigenous Act (1993) which recognized land as the fundamental basis of indigenous identity.

By the year 2000 the upsurge in violence over land led to the establishment of a presidential commission whose task was to fix a ‘historic truth’ and propose the basis for a ‘new treatment’ towards indigenous peoples.

But 20 years have gone by and there is little to show for these efforts. Violence used to be mainly in the summertime; now it is commonplace all year round. Forestry companies and landowners – large and small- accuse the State of being unable to defend the rule of law. Some indigenous leaders, on the other hand, claim that the State has overlooked human rights standards when dealing with their people, be it through ruthless law enforcement proceedings by the police, mismanagement of land vindications or their lack of inclusion in the political system. Meanwhile, governments from left and right seem to have failed in addressing the roots of the conflict.

Some tend to see the problem as requiring simply state enforcement of the law, backed by the political will to keep public order and peace. In other words, the solution is essentially one of security: it is about improving intelligence work, strengthening the police and ensuring effective judicial prosecution.

But the situation is far too complex to admit of such a simple solution. To begin with, indigenous peoples are everywhere in Chile, from north to south, from the coast to the mountains. Even though violence is confined to the Araucanía and its neighbouring regions, many of the demands of the Mapuche –-including respect for their rights to land and territory- are common to all indigenous peoples. And there is also the fact of poverty, steadily diminishing but still striking indigenous peoples harder than any other group in the country.

Most Chileans who live in the country’s central valley have been fairly untroubled by Mapuche protests far to the south of the capital, Santiago. Most Chileans believe that the State has badly handled the issue, but the problem has been framed simply as one of violence related to disputes over land.

The church burnings appear to have been by a radical fringe

Now a new variable has been added. Earlier this year a spate of attacks to both Catholic and Protestant churches in Araucanía have been carried out by indigenous radical groups. How has this come about, given that nearly 80 per cent of the Mapuche claim to be Christian (50 per Catholic Church and 30 per cent Protestant)?

The Catholic Church has a long tradition of incorporating indigenous symbols and practices in Andean religious celebrations, and of course has a long tradition — stretching back to the early days of the Spanish colony — of defence of indigenous rights. Bartolomé de las Casas in Cuba and Antonio de Montesinos in Santo Domingo are two of the most famous early priest-advocates of the Indians, but we have the many examples, also, of the Jesuit reductions in eighteenth-century Paraguay down to our own era, where the Church has so often stood with indigenous people against exploitation and in defence of their culture.

How, then, do we explain this violence against churches?

One answer is that Mapuche slogans and activists are not representative of the Mapuche generally, and that ideology plays a major role in the radical wing of the indigenous protest. About a third of the Mapuche people believe violence can be justified in some situations related to land vindications, but violence against churches is quite a different matter.

In April, a statement signed by many priests and Religious in the area lamented that the Chilean Church, “for so long committed to the cause of the rights of the Mapuche people, today are ever more silent and distant, incapable of mediating or becoming involved in the dialogue for justice that is necessary for a lasting peace.” The fact that Araucanía’s Catholic bishop, Héctor Eduardo Vargas of Temuco, is right now playing a key role in facilitating a dialogue between Government and indigenous organizations suggests that the April statement fell in fertile soil.

The church burnings as well as the protests more generally have dramatically highlighted the place — or lack of it — of indigenous peoples’ cultures in Chile’s identity. We desperately need to work out an identity capable of fully integrating the original occupants of these lands.

This blog offers comments on news stories as they relate to the Catholic Church. For more information on Catholic Voices visit www.catholicvoices.org.uk
View all posts by catholicvoicesmedia →
This entry was posted in indigenous people, Latin America, South America. Bookmark the permalink.
Loading Comments...
%d bloggers like this: