The Pope on Nice: ‘The pain of the massacre is alive in our hearts’

Posted on July 18, 2016 by catholicvoicesmedia 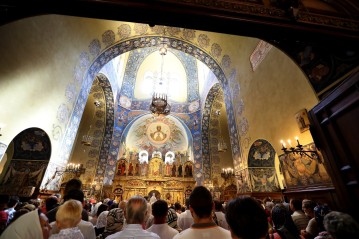 Mass in Nice over the weekend

Remembering the loss of innocent lives in Nice, many of whom were children, the Pope yesterday said “the pain of the massacre is alive in our hearts”.

Speaking at Sunday’s Angelus, he said he was “close to each family and the entire French nation which is in mourning,” adding: “may God, the good Father, welcome all the victims into his peace, support the injured and comfort their families. May he dissolve every project of terror and death, so that man no longer attempts to spill his brother’s blood.”

So far, the death toll of those who were crushed to death last Thursday night is 84, but scores of others were wounded, many critically, when a Tunisian-born Frenchman drove a 20-ton truck into crowds gathered in the city to celebrate Bastille Day.

Pope Francis called the the Mayor of Nice, Christian Estrosi, to offer his assistance. The Pope asked the Mayor: “What can I do for you?”, and promised to meet “as soon as possible” with the families of the victims.

“(The attack) was one of those insane acts that can arise in the hearts of men — and in this case, one man. How can it be reasonably possible that man can be the author of such carnage?” he asked.

The bishop said he hoped compassion and closeness would overcome the “scandal of evil” that might “rightly arouse hate, misunderstanding and closed-mindedness.”

“We must find a way to avoid this at all cost,” he told Vatican Radio. “The message I bring is that which, above all, calls people to be close to one another, to speak, to meet with each other.”

In the UK, Cardinal Vincent Nichols joined other religious leaders in deploring the massacre.

This blog offers comments on news stories as they relate to the Catholic Church. For more information on Catholic Voices visit www.catholicvoices.org.uk
View all posts by catholicvoicesmedia →
This entry was posted in France, terrorist attacks, Uncategorized. Bookmark the permalink.
%d bloggers like this: