Posted on July 27, 2016 by catholicvoicesmedia 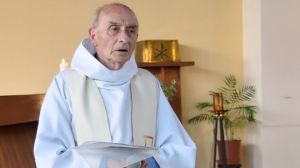 [Austen Ivereigh] Catholic church leaders have reacted to the slaying by Islamists of an elderly French priest yesterday morning with a call to resist feelings of vengeance and hatred and to help build a civilization of love.

The peculiar horror of the attack, in which two young men attacked Fr Jacques Hamel while the 86-year-old was saying Mass, then made him kneel and slit his throat while chanting in Arabic at the altar, produced a wave of shock and revulsion across the world.

It was also clearly designed to feed deep-seated fears of a religious attack on Christianity itself.

Pope Francis responded not only to express his horror but also, pointedly, to describe it as an act of “absurd violence.”

The language was similar to words he used to describe the massacre in Nice – as “senseless” and an act of “hatred” – so denying the perpetrators the justification of a religious or ideological motive.

The assailants were local teenagers, one of whom had attempted to join IS in Syria and had served jail time in France. His mother described how following the Charlie Hebdo attacks of January 2015 he had become “bewitched, like he was in a cult” and had made contact with radical groups on the internet. 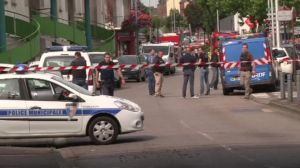 Since January 2015, IS-inspired attackers have killed at least 235 people in France, by far the largest casualty rate of any Western country. The overwhelming majority of strikes have been carried out, as at Rouen, by French residents.

France has Europe’s largest Muslim population – more than 5 million in a nation of 66 million.

An estimated 1,000 French citizens and residents mostly of African Muslim background have traveled to Syria, or been caught trying, to join IS forces ever since the former French possession was plunged into war and chaos five years ago.

Now that IS-inspired attackers have succeeded in specifically attacking a church (a previous attempt, in 2015, to attack two churches in a suburb south of Paris was frustrated) and killing a priest, there is a real risk of turning the IS myth of a crusade into a reality.

When an IS video circulated in November last year that threatened to raise its flag in St Peter’s Square, Pope Francis’ response was immediate and definite. “We’re not having armor-plated doors,” he told journalists. 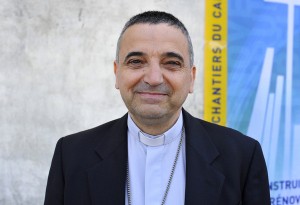 The Archbishop of Rouen, Dominique Lebrun

The French bishops too see this a testing time for Catholics, hence the attempts to persuade them to resist their own feelings of revenge and anger against Muslims and immigrants.

While social media yesterday were full of calls by some Catholics to clamp down on immigration and adopt robust anti-Muslim measures, the bishops had a very different message.

From Krakow, Poland, where many of the French bishops are accompanying 37,000 pilgrims from dioceses across France, the Archbishop of Rouen, Dominique Lebrun, painted the act as a provocation demanding only one response.

“The only weapons the Catholic Church can take up are those of prayer and brotherhood,” he said, before issuing a call to young people “not to lower their arms faced with violence, and to become apostles of the civilization of love.”

Speaking from Krakow, Georges Pontier, the Archbishop of Marseille and president of the French bishops’ conference, told journalists that the horror of the act would give World Youth Day “real content” by offering a clear choice.

“We are no longer in the realm of ideas,” he said. “See what state we are in, following the attacks of 2015, and of Nice … You, young people, in what camp will you put yourselves? How will you take your part in the dialogue with the other?” 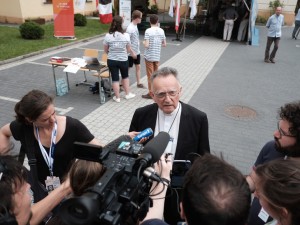 Pontier said that while killing required no courage, “courage is necessary to build brotherhood with people different from us.”

He described the task as “an extraordinary building work that awaits us.”

Recalling how previous generations had had to cope with war, “we are now confronted with another kind of war that we have never known on our soil,” adding that, if Christians were now an IS “target,” Muslims were too.

“Many more of them have been killed by Daesh than us,” he said. “It is man himself who is in danger. They kill for the sake of killing and to cause fear.”

Meanwhile, as tributes to the slain priest poured in, a picture emerged of a humble, gentle pastor who was a dedicated servant of his community.

“We used to joke around and tell him ‘Jacques, you’re doing too much! It’s high time you retire!,’” Fr Aimé-Rémi Mputu Amba, a priest of Rouen, told the newspaper Le Figaro. “And he would always laugh it off and say, ‘Have you ever met a retired priest? I’ll work until my last breath.’”

Meanwhile the parish priest at the church where he was slain, St.-Étienne-du-Rouvray, described him as “very balanced when it came to the evolution of the church, not too traditional, but not too permissive either.”

“He welcomed all the changes made by the pope,” Fr Moanda Phuti said.

Also from Krakow, the French bishops’ conference secretary-general, Msgr Olivier Ribadeau Dumas, said: “Together with all the bishops of France, we say neither hate nor violence is a way out. We cannot surrender to these sentiments. Today young people from around the world rejoice, because of this love we can live in peace and fraternity.”

Dumas went on to say that the parishes of France have been faithful to the call of Pope Francis who has invited all European parishes to host immigrants. “We need to reject the suspicions of our neighbors,” he said, adding: “We believe that evil and violence will not have the upper hand and all the French bishops share this opinion.”

Meanwhile the Archbishop of Lyon, Cardinal Philippe Barbarin, said he was praying fervently to Jesus, Prince of Peace, “to deliver our society from the violence and the terrorism that strike us blindly, and show us how each of us, in our place, can be ‘artisans of peace.’”

That message was reiterated by the Archbishop of Krakow, Cardinal Stanislaw Dziwisz, at the first press conference at WYD last night.

“Now in Europe, we have a time of anxiety,” he said. “That is why we want to create an atmosphere of peace, reconciliation, solidarity, and kindness which from Krakow can take over the whole world.”

[This article also appears at Crux. A number of Catholic Voices speakers have been interviewed on the Rouen attack: Austen Ivereigh was on this morning’s BBC Radio 4’s Today programme shortly after 07:30; and later on BBC Radio Oxford. Caroline Farrow was on BBC TV Breakfast, and then on BBC local radios. Yesterday from France Amicie Pelissie du Rausas appeared on BBC Radio 5Live after 7pm].

This blog offers comments on news stories as they relate to the Catholic Church. For more information on Catholic Voices visit www.catholicvoices.org.uk
View all posts by catholicvoicesmedia →
This entry was posted in France, terrorist attacks. Bookmark the permalink.
%d bloggers like this: