Posted on August 5, 2016 by catholicvoicesmedia

[Austen Ivereigh] It is clear that the Islamic world is in a major crisis over the relationship of religion to politics, one comparable, in its way, to the European Wars of Religion in the seventeenth century that were eventually resolved by the secular Enlightenment.

Islamism is one brutal answer to the question of how Islam relates to the modern state, one that has risen out of the ashes of violence and war. It is an attempt to reconcile pre-modern Islamic law with the contemporary nation-state by waging war on secularism – which for the Islamic State means anything less than its bloody theocracy.

That makes it an enemy of the West, and of Christians everywhere – mostly in the Middle East. But it is also an enemy of most of the Islamic world: it regards Shiism as innovation, and to innovate on the Quran is to deny its initial perfection.

This existential crisis within Islam is going to play out for a long time yet, and there is little anyone can do prevent it. Over time, Islamic State radicalism will prove its undoing, and it will collapse under the weight of its own contradictions.

But what we are in control of is our western response to the Islamic State’s provocation. And how we react will either hasten its collapse or fuel its growth.

The Islamists’ strategy: a war of religions

There are two essential points to grasp:

First, the Islamic State might recruit mentally-ill teenagers from the banlieus, but it is far from being a bunch of psychopaths. Islamism is a violent ideology drawn from a purist Islamic fundamentalism. It is a version of Islam which radically differs from, and is rejected by, most of the Muslim world.

Second, a war with Christianity is key to its worldview. The Islamic State awaits the army of “Rome,” whose defeat at Dabiq, Syria, will initiate the countdown to the apocalypse.

To precipitate it, they are determined to bring their war out of the Middle East into our airports and concert halls and even our churches. Their violence is strategic, and has an aim: to spread terror, not for its own sake but to produce a reaction, one that will confirm to them their own worldview, which is that secular societies are rotten and degenerate, and the Christian religion false and idolatrous.

To demonstrate the truth of this narrative, they need a war – a religious war, each side with its armies and martyrs – which begins by taking the fight to the soft belly of the west to spread terror to provoke a reaction, one that polarizes society.

The Islamic State believes that, with sufficient provocation, ‘Christians’ – westerners – will turn on Muslims, Muslims will look to the Islamic State to defend them, and eventually there will be a showdown between the two.

So far, they are succeeding. The rise of new nationalist parties across Europe, and, of course, Donald Trump, are exactly what the script foresees – along with the current rise in the number and ferocity of attacks on Muslims.

More attacks, more terror, more backlash; to the Islamic State, the path ahead is clear.

Some Catholic commentators – and even one cardinal – have agreed with I.S. that, in effect, that the Islamic State is the true face of Islam, and that there is no real distinction.

(Revealingly, one critic lambasts Pope Francis for saying on the plane from Krakow that “there is no such phenomenon as Islamist violence,” which, had he said it, would have been very surprising. In fact, what the pope rejected was the term “Islamic violence”.)

Having accepted the I.S. narrative about Islam as self-evident, it is a short step to claiming that ‘Islam’ desires to take over the world, is intrinsically violent, and is at war with Christianity.

Their disappointment at Francis’ description of Father Jacques Hamel’s violence as “absurd” and his failure to refer to the priest as a martyr, as well as their indignation at his daring to suggest that there was fundamentalism and violence within Christianity, are all over social media.

But Francis, thankfully, sees further. He has a six-fold strategy in response to the Islamic State provocation. It is well thought out, and it is effective.

(1) The first is to put every death in the broader context of others, to avoid any victim becoming the focus of moral outrage. This was particularly necessary in the case of Hamel, because he was a gentle, elderly priest slain in a provocatively gruesome manner.

That is why Francis never used the word ‘martyr’ to describe him – to do so, in this tinder-box atmosphere of fear and terror, would be to weaponize his death, and ignite screaming headlines – or even to name him.

“This holy priest who died in the moment of offering the prayer for the whole church is one but how many Christians, how many innocents, how many children?” the pope asked on the flight to Krakow.

(2) Second, he insists on fraternity and peace as the only authentic Christian response.

“We have no desire to conquer hatred with more hatred, violence with more violence, terror with more terror,” he told the pilgrims at the World Youth Day vigil, adding that the Church’s response to “a world at war” was fraternity and family.

On the way to the vigil he venerated the relics of two victims of terrorism, asking God not to stiffen our resolve for the coming showdown, but to heal and console those who have been harmed, and to convert the hearts of terrorists so they recognize the “evil of their actions.”

(3) Third, faced with the clamor of scapegoating politicians to shut the border, Francis has continued to insist on the importance of keeping our doors open to refugees.

Hence his prayer, in Krakow, for God to give the families of victims “the strength and courage to continue to be brothers and sisters for others, above all for immigrants, giving witness to Your love by their lives.”

(4) Fourth, faced with the Islamic State narrative of Christianity versus Islam, Francis’ strategy is to polarize in a different way: religion and peace on the one side, violent fundamentalism and false religion on the other.

It was demonstrated, beautifully, on Tuesday, when 100 Muslims, along with leaders of different faiths, turned up to Fr Hamel’s funeral. 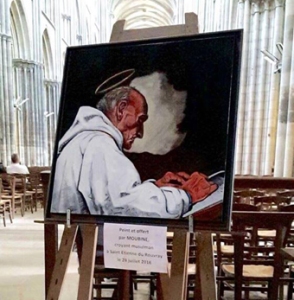 The portrait of Fr Jacques painted and presented to the archbishop by Moubine, a Muslim believer living in St Etienne du Rouvray where the priest was killed

Next to the Archbishop of Rouen on the altar was an iconic portrait of the priest, a halo above his head, which had been earlier painted and presented to the archbishop by a Muslim believer from the town where the priest was killed.

Hence Francis says we are at war – a war of rival interests and powers – but insists that true religion is not involved. “All religions want peace,” he said on the plane to Krakow; “it’s the others who want war.”

Hence, too, his remarks on the return from Krakow: If (true) religion seeks peace, the idea of “Islamic” violence is incoherent. Therefore – he did not need to say it – what Islamic State represents is not Islam or even religion, however it is dressed up.

I.S. feel deeply threatened by this. “Recent popes – and especially Pope Francis – have attempted to paint a picture of heartwarming friendship, seeking to steer Muslim masses away from the obligation of waging jihad against disbelief,” was how I.S.’s magazine Dabiq recently tried to counter Francis.

But Francis has gone further still, rejecting any claim that IS violence has a power or significance beyond itself.

For the radicals, violence is sacred, sacrificial, divinely-sanctioned – it is precipitating Armaggedon and the celestial triumph of Islam.

So when Francis declares that its violence is, as well as being evil and abhorrent, “senseless,” as he described the Nice massacre, or “absurd” as he said of the violence that slayed Fr Hamel, he is dealing Islamic State a significant blow: the world’s leading religious authority has denied them the legitimacy of a religious justification.

This is a strategy, but it is, also, genuinely, demonstrating what true religion is.

God himself was the innocent victim of a religiously and politically sanctioned sacrifice; the Resurrection destroyed any idea that God is violent.

The power of God, then, lies not in violence, but in love and fraternity. With the shadow of Islamic  radicalism over us, that is no longer an idea, but  – as one of the French bishops put it in Krakow – a stark choice: Do we believe in God’s power, or the myth of the divine as a vengeful tribal deity?

(5) Fifth, faced with the temptation for Christians to see Muslims as violent fundamentalists and themselves as peace-loving reasonable people, Francis insists that Christians are also prone to fundamentalism and violence.

As a longtime discerner of spirits, Francis has a keen awareness of the workings of the diabolos, the great divider, and the subtle ways evil can persuade ‘good’ people to set themselves over and against ‘bad’ people.

Whatever the defects of Islam in relation to violence, Muslims – as he said on the plane – desire peace and encounter, while Christians are also prone (whether now or in the past) to fundamentalism and religiously-sanctioned violence.

This is not pacifism: we need police and security services to up their game, and (if it doesn’t create more innocent victims) to eviscerate radical Islam by bombing it. But the jihadists will not be defeated by war, and to believe it can be is, again, to accept their narrative.

Like all evil projects, the Islamic state will eventually collapse from its own internal contradictions. In the meantime, the battle will be fought in the human heart.

What the Church can help the west do is absorb the violence, and not be provoked by it; to be patient in fear and insecurity; and to accept that in the meantime more people will die.

It is not what our politicians will tell us, but we all know it is true.

Seen from a Christian perspective, the deaths of those who, like Hamel, are innocent peacemakers, are not meaningless but powerful.

“Can the world still wait for the chain of love which will replace the chain of hate?” asked Archbishop Dominique Lebrun in his homily. “Will we need other massacres to convert us to love and to the justice that builds love?”

(6) Sixth and finally, therefore, Francis’ strategy is not to surrender to the fear by giving up our spaces and our identity.

Faced with a specific Islamic State threat on the Vatican last December, he refused to wear a bulletproof vest, and said we would not armor-plate our church doors.

On Tuesday in Rouen, Archbishop Lebrun invited people to pay homage to Fr Jacques Hamel by visiting a church in these days “in order to express your refusal to see a holy place defiled, to affirm that violence will not take your heart over, to ask for God’s grace.”

It is an action each of us can take; and each such action we take brings closer the jihadists’ inevitable defeat.

[A slightly different version of this article also appears at Crux]

This blog offers comments on news stories as they relate to the Catholic Church. For more information on Catholic Voices visit www.catholicvoices.org.uk
View all posts by catholicvoicesmedia →
This entry was posted in Pope Francis, terrorist attacks. Bookmark the permalink.