The bishop who pitched his sleeping bag among us

Posted on August 9, 2016 by catholicvoicesmedia 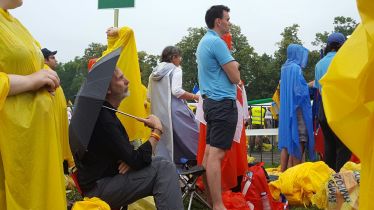 [Brenden Thompson] Alan Williams, the Bishop of Brentwood, was one of just a handful of bishops who joined the 2.5m young pilgrims camping outside for a candle-lit vigil at the end of World Youth Day in Krakow.

Not only did he camp in the open air with over 90 young people from his diocese — his sleeping bag like everybody else’s pitched on the cold, hard ground overnight — but he also walked over 15km with them in the blistering heat to and from the so-called Campus Misericordiae, the ‘Field of Mercy’, for the vigil and the final Mass the following day.

He was with his flock throughout, starting with a 25-hour coach journey with them to and from Essex.

I don’t mean to single out one particular bishop for praise. The fact that the 66-year-old former national shrine director of Walsingham camped overnight with his flock isn’t an indictment of the 800 or so bishops at World Youth Day who did not. No doubt they had good reasons — age, infirmity, or whatever — for not being there.

But it was a striking example of what Pope Francis wants to see of his pastors – walking with and among their flocks. As he told Latin America’s bishops at the last World Youth Day, in Rio de Janeiro in 2013:

Bishops must be pastors, close to people, fathers and brothers, and gentle, patient and merciful. Men who love poverty, both interior poverty, as freedom before the Lord, and exterior poverty, as simplicity and austerity of life. Men who do not think and behave like “princes”. Men who are not ambitious, who are married to one church without having their eyes on another. Men capable of watching over the flock entrusted to them and protecting everything that keeps it together: guarding their people out of concern for the dangers which could threaten them, but above all instilling hope: so that light will shine in people’s hearts. Men capable of supporting with love and patience God’s dealings with his people. The Bishop has to be among his people in three ways: in front of them, pointing the way; among them, keeping them together and preventing them from being scattered; and behind them, ensuring that no one is left behind, but also, and primarily, so that the flock itself can sniff out new paths.

It is a kind of accompaniment that St John Paul II, founder of WYD and a constant presence in Krakow, did so well. As a young curate he was famous for taking groups of young people to the mountains where he would camp, ski and canoe with them. The young people affectionately called the young Karol Woytła wujek (Uncle).

At WYD Pope Francis was called Papa, and he, too, accompanied the young people gathered in Krakow from over 180 countries around the world – by his presence, by his gestures, and by his messages of advice and exhortation.

One of his most powerful messages was a warning “not to confuse happiness with a sofa” –not to settle for the vision that the world offers, one that equates happiness with being comfortable. He challenge was blunt; we are here on this earth not to “vegetate” but “to leave a mark”.

“When we opt for ease and convenience, for confusing happiness with consumption, then we end up paying a high price indeed: we lose our freedom,” he told us, awakening a generation from the lure of being ‘couch potatoes’.

Returning to ‘ordinary’ parish life after WYD is always a challenge: it’s hard not to draw a contrast between the intense joy and exuberance of the five-day festival of faith and the rather mundane realities back home — especially when the Pope has sent you back as missionary disciples.

But at its best the encouraging, faithful presence of Bishop Alan or St John Paul II or Francis reminds us that, as Pope Francis assured us at WYD, it is Christ himself who accompanies us on the mission.

“The Lord doesn’t want to remain in this beautiful city, or in cherished memories alone,” Francis said at the closing Mass. “He wants to enter your homes, to dwell in your daily lives —  in your studies, your first years of work, your friendships and affections, your hopes and dreams.”

Youth ministry sometimes involves cringe-inducing attempts at being ‘relevant’ that bears little fruit. But at its best, it means making time and space for young people, offering them a concrete place in parish life and not being afraid to challenge them with the Gospel.

It’s what Bishop Alan and countless other pastors, youth workers, teachers and parents offer them: an icon of a loving presence that speaks to us of a merciful Father who similarly wishes to accompany us in the journey through life.

This blog offers comments on news stories as they relate to the Catholic Church. For more information on Catholic Voices visit www.catholicvoices.org.uk
View all posts by catholicvoicesmedia →
This entry was posted in World Youth Day 2016. Bookmark the permalink.
%d bloggers like this: