Posted on October 26, 2016 by catholicvoicesmedia 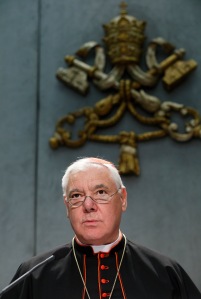 Cardinal Gerhard Muller, prefect of the Congregation for the Doctrine of the Faith, speaks at a Vatican news conference yesterday (CNS photo/Paul Haring)

The Vatican yesterday issued new rules on the disposal of ashes following cremation in order to avoid disrespecting the dead or denying core Christian truths about the fate of the body.

Because of “the great dignity of the human body as an integral part of the human person whose body forms part of their identity” the Church cannot “condone attitudes or permit rites that involve erroneous ideas about death, such as considering death as the definitive annihilation of the person, or the moment of fusion with Mother Nature or the universe, or as a stage in the cycle of regeneration, or as the definitive liberation from the “prison” of the body,” the Instruction says.

The Vatican lifted its disapproval of cremation in 1963 “unless chosen for reasons contrary to Christian doctrine” but yesterday’s Instruction is in response to growing concern at the increasing popularity of disposing of ashes in ways that reflect pantheistic, naturalistic or superstitious beliefs.

The Instruction says that only in exceptional cases — presumably in places where Christians are persecuted, or in times of war — can ashes be kept at home. “From the earliest times, Christians have desired that the faithful departed become the objects of the Christian community’s prayers and remembrance,” the Instruction says, adding: “Their tombs have become places of prayer, remembrance and reflection.”

According to The Times today, about 75 per cent of those who die in Britain are cremated — double the number since the 1970s.

The text of the Instruction follows

Congregation for the Doctrine of the Faith

To rise with Christ, we must die with Christ: we must “be away from the body and at home with the Lord” (2 Cor 5:8). With the Instruction Piam et Constantem of 5 July 1963, the then Holy Office established that “all necessary measures must be taken to preserve the practice of reverently burying the faithful departed”, adding however that cremation is not “opposed per se to the Christian religion” and that no longer should the sacraments and funeral rites be denied to those who have asked that they be cremated, under the condition that this choice has not been made through “a denial of Christian dogmas, the animosity of a secret society, or hatred of the Catholic religion and the Church”.1Later this change in ecclesiastical discipline was incorporated into the Code of Canon Law (1983) and the Code of Canons of Oriental Churches (1990).

During the intervening years, the practice of cremation has notably increased in many countries, but simultaneously new ideas contrary to the Church’s faith have also become widespread. Having consulted the Congregation for Divine Worship and the Discipline of the Sacraments, the Pontifical Council for Legislative Texts and numerous Episcopal Conferences and Synods of Bishops of the Oriental Churches, the Congregation for the Doctrine of the Faith has deemed opportune the publication of a new Instruction, with the intention of underlining the doctrinal and pastoral reasons for the preference of the burial of the remains of the faithful and to set out norms pertaining to the conservation of ashes in the case of cremation.

The resurrection of Jesus is the culminating truth of the Christian faith, preached as an essential part of the Paschal Mystery from the very beginnings of Christianity: “For I handed on to you as of first importance what I also received: that Christ died for our sins in accordance with the scriptures; that he was buried; that he was raised on the third day in accordance with the scriptures; that he appeared to Cephas, then to the Twelve” (1 Cor 15:3-5). Through his death and resurrection, Christ freed us from sin and gave us access to a new life, “so that as Christ was raised from the dead by the glory of the Father, we too might walk in newness of life” (Rm 6:4). Furthermore, the risen Christ is the principle and source of our future resurrection: “Christ has been raised from the dead, the first fruits of those who have fallen asleep […] For as in Adam all die, so also in Christ shall all be made alive” (1 Cor 15:20-22).

It is true that Christ will raise us up on the last day; but it is also true that, in a certain way, we have already risen with Christ. In Baptism, actually, we are immersed in the death and resurrection of Christ and sacramentally assimilated to him: “You were buried with him in baptism, in which you were also raised with him through faith in the power of God, who raised him from the dead” (Col 2:12). United with Christ by Baptism, we already truly participate in the life of the risen Christ (cf. Eph 2:6).

Because of Christ, Christian death has a positive meaning. The Christian vision of death receives privileged expression in the liturgy of the Church: “Indeed for your faithful, Lord, life is changed not ended, and, when this earthly dwelling turns to dust, an eternal dwelling is made ready for them in heaven”.2 By death the soul is separated from the body, but in the resurrection God will give incorruptible life to our body, transformed by reunion with our soul. In our own day also, the Church is called to proclaim her faith in the resurrection: “The confidence of Christians is the resurrection of the dead; believing this we live”.3

Following the most ancient Christian tradition, the Church insistently recommends that the bodies of the deceased be buried in cemeteries or other sacred places.4 In memory of the death, burial and resurrection of the Lord, the mystery that illumines the Christian meaning of death,5 burial is above all the most fitting way to express faith and hope in the resurrection of the body.6 The Church who, as Mother, has accompanied the Christian during his earthly pilgrimage, offers to the Father, in Christ, the child of her grace, and she commits to the earth, in hope, the seed of the body that will rise in glory.7

By burying the bodies of the faithful, the Church confirms her faith in the resurrection of the body,8 and intends to show the great dignity of the human body as an integral part of the human person whose body forms part of their identity.9 She cannot, therefore, condone attitudes or permit rites that involve erroneous ideas about death, such as considering death as the definitive annihilation of the person, or the moment of fusion with Mother Nature or the universe, or as a stage in the cycle of regeneration, or as the definitive liberation from the “prison” of the body. Furthermore, burial in a cemetery or another sacred place adequately corresponds to the piety and respect owed to the bodies of the faithful departed who through Baptism have become temples of the Holy Spirit and in which “as instruments and vessels the Spirit has carried out so many good works”.10 Tobias, the just, was praised for the merits he acquired in the sight of God for having buried the dead,11 and the Church considers the burial of dead one of the corporal works of mercy.12

Finally, the burial of the faithful departed in cemeteries or other sacred places encourages family members and the whole Christian community to pray for and remember the dead, while at the same time fostering the veneration of martyrs and saints.

Through the practice of burying the dead in cemeteries, in churches or their environs, Christian tradition has upheld the relationship between the living and the dead and has opposed any tendency to minimize, or relegate to the purely private sphere, the event of death and the meaning it has for Christians.

In circumstances when cremation is chosen because of sanitary, economic or social considerations, this choice must never violate the explicitly-stated or the reasonably inferable wishes of the deceased faithful. The Church raises no doctrinal objections to this practice, since cremation of the deceased’s body does not affect his or her soul, nor does it prevent God, in his omnipotence, from raising up the deceased body to new life. Thus cremation, in and of itself, objectively negates neither the Christian doctrine of the soul’s immortality nor that of the resurrection of the body.13

The Church continues to prefer the practice of burying the bodies of the deceased, because this shows a greater esteem towards the deceased. Nevertheless, cremation is not prohibited, “unless it was chosen for reasons contrary to Christian doctrine”.14 In the absence of motives contrary to Christian doctrine, the Church, after the celebration of the funeral rite, accompanies the choice of cremation, providing the relevant liturgical and pastoral directives, and taking particular care to avoid every form of scandal or the appearance of religious indifferentism.

When, for legitimate motives, cremation of the body has been chosen, the ashes of the faithful must be laid to rest in a sacred place, that is, in a cemetery or, in certain cases, in a church or an area, which has been set aside for this purpose, and so dedicated by the competent ecclesial authority. From the earliest times, Christians have desired that the faithful departed become the objects of the Christian community’s prayers and remembrance. Their tombs have become places of prayer, remembrance and reflection. The faithful departed remain part of the Church who believes “in the communion of all the faithful of Christ, those who are pilgrims on earth, the dead who are being purified, and the blessed in heaven, all together forming one Church”.15

The reservation of the ashes of the departed in a sacred place ensures that they are not excluded from the prayers and remembrance of their family or the Christian community. It prevents the faithful departed from being forgotten, or their remains from being shown a lack of respect, which eventuality is possible, most especially once the immediately subsequent generation has too passed away. Also it prevents any unfitting or superstitious practices.

In order that every appearance of pantheism, naturalism or nihilism be avoided, it is not permitted to scatter the ashes of the faithful departed in the air, on land, at sea or in some other way, nor may they be preserved in mementos, pieces of jewelry or other objects. These courses of action cannot be legitimized by an appeal to the sanitary, social, or economic motives that may have occasioned the choice of cremation.

When the deceased notoriously has requested cremation and the scattering of their ashes for reasons contrary to the Christian faith, a Christian funeral must be denied to that person according to the norms of the law.16

The Sovereign Pontiff Francis, in the Audience granted to the undersigned Cardinal Prefect on 18 March 2016, approved the present Instruction, adopted in the Ordinary Session of this Congregation on 2 March 2016, and ordered its publication.

Rome, from the Offices of the Congregation for the Doctrine of the Faith, 15 August 2016, the Solemnity of the Assumption of the Blessed Virgin Mary.

2 Roman Missal, Preface I for the Dead.

This blog offers comments on news stories as they relate to the Catholic Church. For more information on Catholic Voices visit www.catholicvoices.org.uk
View all posts by catholicvoicesmedia →
This entry was posted in Vatican guidelines/rules. Bookmark the permalink.