Posted on February 16, 2018 by catholicvoicesmedia

[Elizabeth Howard] Tom Daly has announced that he and his partner, Dustin Lance Black, are expecting a baby later this year. Every baby is a blessing, and every baby is of inestimable value, but there is much more to this story than that. 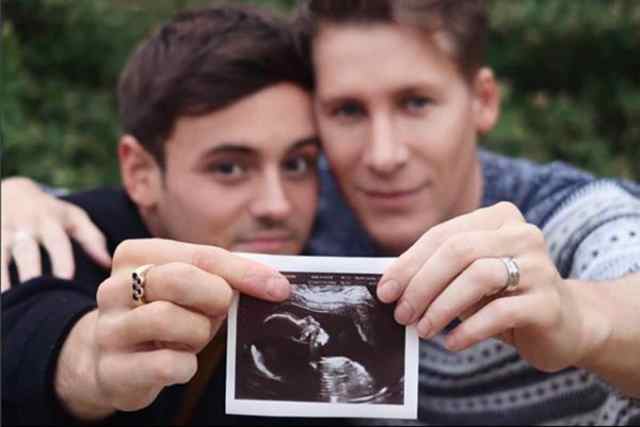 No mention is made anywhere in his announcement of who the mother is. Every baby has a mother, but this mother has been completely airbrushed out.

Presumably Tom Daly’s baby will grow up without a mother. If so, this is not because of death or extreme circumstances, but because he or she will be deliberately deprived of one. No matter how much Tom Daly and his partner love the baby their love will never compensate him or her for this enormous loss.

I am donor-conceived (the product of a sperm donor), and I can personally witness to a sense of loss of identity because of having been brought into the world that way. I grew up with a genetic mother and a “social father”. Tom Daly’s child will have two fathers – effectively one biological father and one adoptive father – but will live with no mother, biological or adopted.

Tom Daly’s baby is currently in the womb of an unnamed woman; he or she may be the genetic child of that woman, or the genetic child of another woman, euphemistically termed the “egg donor”; the biological term is, of course, “mother”. The arrangements under which the child has been conceived have not been announced. On the one hand such discretion is natural, and appropriate; on the other, one wonders whether the child itself will be privy to such essential information as which man is his or her biological father, and the name and identity of his or her biological mother.

Moreover, the unseen woman in the situation will be suffering consequences that are ignored in the “good news story” presented to us. Surrogacy itself carries short- and long-term health risks; being an “egg donor” can, ironically, lead to long-term fertility problems for the woman concerned.

Being a surrogate mother can have unforeseen consequences for both mother and baby. The baby can be “quality controlled”, and abandoned if it is deemed to be not up to standard. The case of Baby Gammy demonstrates this issue. Baby Gammy was one of twins born in 2014 via a Thai surrogate. His healthy sister was taken to her intended parents in Australia but Gammy, who had Down’s Syndrome, was left in Thailand. The case highlights the enormous potential difficulties of surrogacy for all parties.

Stop Surrogacy Now is an organisation campaigning for an end to surrogacy in all forms. Their spokespeople have strong statements about surrogacy. “A woman is a human being not a machine,” says Shagufta Omar, President, Pakistan Chapter of the International Muslim Women Union. She continues, “Disconnecting both mother and the child from each other is the violation of the human rights of both.”

“There is no right to a child and rich people must be stopped from using a woman as a living incubator and then taking their baby away and showing it off as their own. We must prevent this reproductive slavery and stop it now,” states Dr Renate Klein, long-time health activist and FINRRAGE (Australia) co-ordinator.

When I first spoke publicly about being donor-conceived, I received many comments from people who thought I was not allowed to feel anger, sorrow or loss about the way I was conceived. Their reaction can be described as “Shut up and be grateful.”

Interestingly, Elton John, who has two children himself via surrogacy, has said it will be “heartbreaking” for his son to “grow up and realise he hasn’t got a mummy”. He has got a mummy, of course, but she has been deliberately removed from him at birth; but at least Elton John recognises that his child will experience grief and loss precisely because of the way he was brought into the world. Very often, donor-conceived people feel that they are not allowed to express these feelings, either out of loyalty to their parents or because those around them cannot relate to the situation and try to silence the person suffering instead of addressing root causes.

There are, of course, people who do not experience any ill effects of being donor-conceived. But there are many who do, and some of us are trying to make our voices heard. The website Anonymous Us has accounts from many people with many different viewpoints. We are donor conceived is another useful resource.

I am sure that Tom Daly and Dustin Lance Black are delighted that there is a baby on the way, and I wish them well. I also wish that, as a society, we could have an honest debate about the rights of powerful adults over voiceless children and poor women.