Posted on February 20, 2018 by catholicvoicesmedia

[Austen Ivereigh] Pope Francis has revealed that “regularly” on Fridays, he meets quietly with a group of survivors of sexual abuse, saying it’s important for him to hear their stories because “what they have been through is so hard, they are destroyed.” 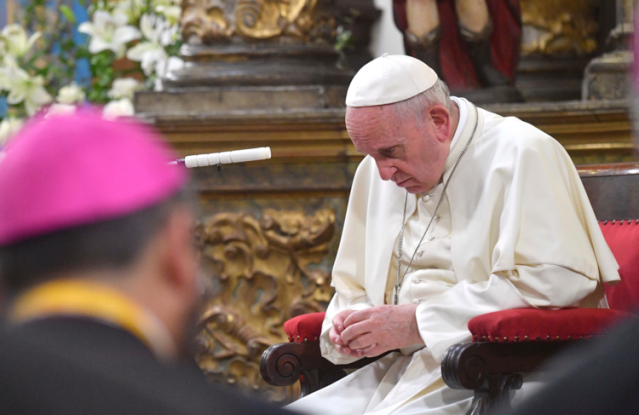 The pontiff also said that clerical sex abuse is “the greatest desolation that the Church is undergoing,” one that expresses both the Church’s fragility as well as its “hypocrisy.”

The revelations come in a record released on February 15 of the pope’s meetings with Jesuits on his trip last month to Chile and Peru. The transcript was approved by the pope and released by Francis’s longtime Jesuit collaborator, Father Antonio Spadaro.

The director of the Vatican Press Office, Greg Burke, released a statement on Thursday confirming the meetings.

“I can confirm that, several times each month, the Holy Father meets victims of sexual abuse either individually or in groups,” Burke said. “Pope Francis listens to the victims and seeks to help them to heal the grave wounds caused by the abuse they’ve suffered.”

“The meetings take place with the greatest discretion,” Burke said, “out of respect for the victims and their suffering.”

Francis said that the Church’s shame over clerical sex abuse was a “grace” that offered a chance for conversion, recalling that he had once been crossing into the Plaza de Mayo during a protest when a couple with a three-year-old child saw him.

“Come back here!” the father told the child, “Watch out for the pedophiles!”

“How shameful I felt! What shame! They didn’t realize that I was the archbishop, I was a priest and… what shame!” Francis told the Jesuits in Lima.

He said some tried to put sex abuse in perspective by comparing the low percentage in the clergy compared to other professions, “but it’s appalling even if it were just one of our brothers!”

He said God anointed a priest “to lead both young people and adults to holiness, but instead of leading them to holiness, destroys them. It’s horrible.”

He then added: “You have to listen to one who has been abused. On Fridays – sometimes this is known, sometimes not – I regularly meet some of them. In Chile I had a meeting. Because what they have been through is so hard, they are destroyed. Destroyed.”

For the Church, Francis added, “this is a great humiliation. It shows not just our fragility but also – let’s say this clearly – our level of hypocrisy.”

He then turned to abuse in a number of new religious congregations, noting that Peru has had several such scandals – including, most notoriously, the Sodalicio de Vida Cristiana, or Sodalitium, which the pope ordered to be taken over by the Vatican.

Among other “painful cases” he said Pope Benedict had to suppress “a large male congregation” whose founder “abused young and immature religious men” and that Francis had suppressed the unnamed congregation’s female branch, whose founder “had also spread such habits.”

He said abuse in such congregations was “always the fruit of mentality linked to power that can only be healed in its malignant roots” and that usually involved a mix of three kinds of abuse: “abuse of authority (mixing the internal forum with the external forum), sexual abuse and an economic mess,” adding: “There’s always money involved. The devil enters through the wallet.”

Extract from an article that first appeared in Crux