Posted on August 27, 2018 by catholicvoicesmedia

On Saturday, Pope Francis once again reaffirmed that he is, above all, a pastor. 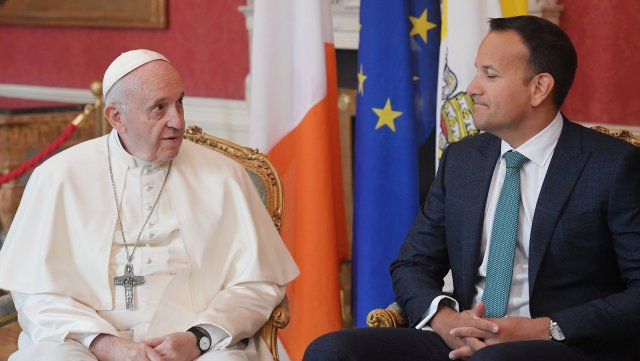 His arrival in Ireland was marked by all the pomp and formality of an official state reception. He made the obligatory visit to the head of state, President Michael D Higgins, in Áras an Uachtarån, for a ceremonial tree planting, which was followed by a trip to Dublin Castle where he met the political and cultural establishment of Ireland.

Leo Varadkar, Ireland’s Prime Minister, officially addressed the Pope with a speech touching firmly yet tactfully on the main points of controversy about the Catholic Church which have increasingly occupied the media in recent years. He fairly acknowledged the good done by a Church which had provided for the education and healthcare of the nation in the earliest years of independence when the state could not.

On the other hand, he also addressed the public scandals of the Irish Church, the historic abuse of children by priests and mistreatment of women in religious run mother and baby homes. He mentioned the successive referendums in Ireland which legalised divorce, same sex marriage, and abortion, ending his speech with the prevailing theme that the country has changed and progressed a lot since John Paul II’s visit in 1979 and expressing hope that a new and positive relationship between the Church and the State can be developed for a modern Ireland.

The Pope responded with a brief address to an audience which included Varadkar’s partner Matthew, and many of the leading campaigners behind the abortion and gay marriage referendums, reminding listeners that Ireland is once again missionary territory. The main themes included the importance of family, the throwaway culture that discards even the child in the womb, and the ‘challenge to our conscience’ of homelessness and poverty, all issues of especial relevance in today’s Ireland.

In typical Francis style, having spent about half an hour at the Dublin Castle reception, he then proceeded to spend over 90 minutes in private with eight Irish victims of clerical sex abuse, followed by a meeting with homeless families at the Capuchin Day Centre, which provides shelter, food, and medical help the marginalised and deprived.

We’re all very used to this reputation of Francis, true to his namesake, and hearing about it on the internet or on television, but those of us who were among the 80,000 present in Croke Park stadium during that evening’s Festival of Families felt his warmth of character very clearly..

It became clear to many how much more Francis enjoys being among his flock, ‘the People of God’, than with officials and dignitaries – though I was only one in a huge crowd, I was struck by how closely I felt the affection of the Pontiff. It is an affirmation and a huge encouragement for the faithful in Ireland who have felt harassed and dejected, with more and more revelations of abuse and corruption surfacing in recent weeks, and ever higher figures in the hierarchy implicated.

The theme of the Festival of Families, like the World Meeting of Families Congress of the preceding week, could be summed up as ‘solidarity amongst the family of families’, with an emphasis on the international nature of this family which, though flung far across the globe, nonetheless experiences together the shared challenges of new technology, addiction, poverty, family breakup, even violence.

The crowds it gathered came from across the globe, with typically large detachments of Latin Americans from Mexico, Brazil and Argentina, but also Angolans, Nigerians, Kenyans and Ugandans, Filipinos, Russians, and Iraqis, to name just a few – in total, there were 82,000 people from 130 different nations present, and performers from Ireland and around the world, including the renowned singer Andrea Bocelli.

While most great rallies of this size are about great political movements and campaigns, issues that fill news headlines, only in the Catholic church could you find such a rally about the pressing importance of washing the dishes and the urgent need to spend quality time together as a family – indeed, Pope Francis’ revolution of tenderness really is a revolution of the little things, such as reconciling after a fight before bedtime, or helping one another with the daily household chores.

Among the performances of the night the sounds of 500 youths performing Riverdance was an altogether unrepeatable experience. The testimonies of families from around the world, from couples who recovered from heroin addiction, to Iraqi refugees, left a deep impression, and once more the theme of solidarity, not only between family members, but between families, was hammered home.