Ministry with young people after the Synod on Youth, Faith and Vocational Discernment

Posted on October 31, 2018 by catholicvoicesmedia

Over the month of October the Synod of Bishops on “Youth, Faith and Vocational Discernment” has been taking place and it has seen a lively conversation around how the Church can accompany young people. 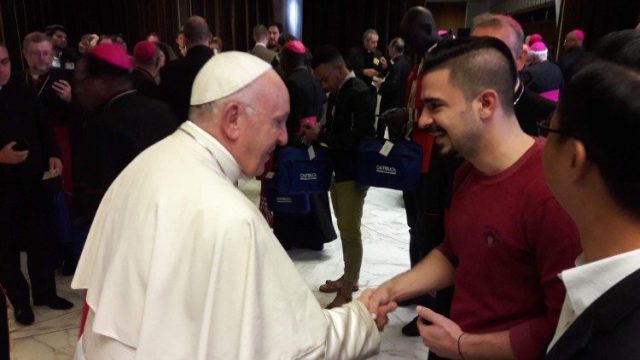 Pope Francis has framed the conversation of the Synod as one including both the young Church and the old Church, making sure that they were a part of the process with the Pre-Synod Meeting of Young People in March of this year, a meeting of young people that was globally representative. At that event, the Pope focused on this scripture verse from Joel and it sums up well his approach to the Synod: ‘And afterwards, I will pour out my Spirit on all people. Your sons and daughters will prophesy, your old men will dream dreams, your young men will see visions’ (Joel 3:1). This was later echoed in his homily at the start of the Synod, ‘May the Spirit grant us the grace to be synodal Fathers anointed with the gift of dreaming and of hoping. We will then, in turn, be able to anoint our young people with the gift of prophecy and vision.’

The Pope has made sure that the Youth Synod is not just about young people but includes them heavily, and so the final document from that meeting went on to influence the Instrumentum Laboris (the working document of the synod) and the Synod of Bishops’ itself has also included young people from over forty countries as official auditors. Here are just a few things to know about the Synod and an idea of how it can guide Catholic youth ministry in the future.

There is Realism to this Conversation

From the beginning, the narrative of the Synod has been a realistic one. When addressing the Pre-Synod Meeting Pope Francis had decried the rising rates of substance abuse and suicide among young people, linking it with a lack of purpose, citing the Italian youth unemployment rate of 25% nationally, in some parts of over 50%. Pope Francis told that meeting ‘these are realities we must be conscious of. A job on the continent would save them!’ He then phrased this as a ‘disorientated generation’ in need of a counter culture that young people themselves could help to build. It is this sense of seeking purpose and meaning that led to Pope Francis to add ‘Vocational Discernment’ to the title of the Synod, instead of it simply being focused on ‘Youth and Faith’.

Cardinal Vincent Nichols of England and Wales expressed in an interview early on in the process of the Synod that this spirit of realism at the Synod itself has been a shock. ‘Its a shock of realism, the shock of reality, and the one thing the gospel and the message of Jesus are not afraid of, is reality. Often debates in the synod can become abstract and idealistic, and wishful. But this is much more realistic.’ This realism has meant that the Church’s history of child abuse, cover up and credibility has also been discussed heavily and, as Cardinal Nichols put it, ‘It’s unquestionably good for the Church to come face to face with its own past, with its own mistakes. And to come face to face with the damage that’s been done, and what the victims carry.’

This realism has been brought to the Synod also by the presence of the young people who were auditors, and in their interventions. One of the key moments of the Synod seems to have been the intervention of the young Iraqi auditor Safa Al Abbia, a 26-year-old Iraqi dentist and a Chaldean Christian. Al Abbia is quoted as saying ‘It certainly is important to talk about the family, sexuality and the social media. However, the main challenge facing young people in Iraq is peace and stability, and the need to live in dignity.’ It is reported that he received the longest applause of the whole Synod, and was later photographed being embraced by Pope Francis.

This realism will be reflected in the final document of the Synod as Archbishop Stanislaw Gadecki, President of the Polish Bishops’ Conference revealed that Part One of the document features ‘the topics of the digital world, immigrants, and abuse.’

Receiving clear answers from the Church was a serious through line of the Pre-Synod discussion – the final document mentions it five times, usually in the same way. ‘We need rational and critical explanations to complex issues – simplistic answers do not suffice’, ‘The young have many questions about the faith, but desire answers which are not watered-down, or which utilize pre-fabricated formulations. We, the young Church, ask that our leaders speak in practical terms about controversial subjects.’ These statements read as though young people feel that they have not always been given proper answers by the Church, and that their pastors and teachers have sometimes been afraid of addressing difficult issues.

Archbishop Anthony Fisher of Sydney addressed just this failure to provide real answers to those seeking them in his speech to the Synod. This came in the form of one long extended apology, starting with the scandal of sex abuse and cover up in the Church, but which transitioned into something broader.

‘For the times Catholic families, parishes and schools have failed to introduce you to the person of Jesus Christ, his saving word, and his plan for your life; and for the times we’ve seemed to you unwelcoming, distant or harsh, or have not demonstrated the sheer joy of being Christians; and for the times when you were searching for your sexual, ethnic or spiritual identity, and needed a moral compass, but found Church people unsympathetic or ambiguous: I apologize.

For when we’ve sold you short not encouraging you to live heroically your baptismal call to holiness and the paschal path to life through self-renunciation; or when we’ve provided too little youth ministry or other support, so you’ve found living as a young person of faith and ideals lonely in a secular, often cynical world; or when unbeautiful or unwelcoming liturgies have failed to inspire or include you, and when you’ve been denied the Church’s treasury of examination of conscience, reconciliation, adoration, pilgrimages, penances and devotions: I apologize.’

This long apology was the first part of the Synod to go quite viral on ‘the Catholic internet’ and the  theme of answers was echoed again later by Bishop Robert Barron. Bishop Barron in his intervention to the Synod called for ‘a new apologetics’, saying:

‘Innumerable surveys and studies over the past ten years have confirmed that young people frequently cite intellectual reasons when asked what has prompted them to leave the Church or lose confidence in it … What is vitally needed today, as an aspect of the accompaniment of the young, is a renewed apologetics and catechesis. … I hope it is clear that arrogant proselytizing has no place in our pastoral outreach, but I hope it is equally clear that an intelligent, respectful, and culturally-sensitive explication of the faith (“giving a reason for the hope that is within us”) is certainly a desideratum. … That the faith has not been effectively communicated was verified by the most recent Religious Landscape Study, from the Pew Research Center in America. It indicated that, among the major religions, Catholicism was second to last in passing on its traditions.’

Bishop Barron then made an interesting insight and suggested that the Church start with the questions that young people naturally have, instead of just rolling out the answers. He described this new apologetics saying that it, ‘would not be imposed from above but would rather emerge organically from below, a response to the yearning of the mind and the heart. Here it would take a cue from the method of St. Thomas Aquinas. The austere texts of the great theological master in point of fact emerged from the lively give-and-take of the quaestiones disputatae that stood at the heart of the educational process in the medieval university. Thomas was deeply interested in what young people were really asking. So should we.’

The Synod is not over

The Final Document of the Pre-Synod Meeting of Young People concluded by saying that the synodal process was a ‘vital and fruitful listening process. It would be a shame if this dialogue were not given the opportunity to continue and grow! This culture of openness is extremely healthy for us.’

Cardinal Tagle of the Philippines just days ago spoke about this too, saying with the young auditors behind him, that the conclusion of the synod of bishops does not mean that this dialogue and listening is finished. ‘The ‘meeting’ is about to end, but the Synod will continue where you are, in your homes, in your parishes, in your school’s. The celebration and the implementation of the synod will continue.’

This too will be a part of the final document. Archbishop Gadecki has said that the Final Document of the Synod is based around this idea of synodality in the wider life of the Church. ‘The first chapter talks about the Church’s missionary Synodality. The second chapter refers to synodality in everyday life. The third chapter draws attention to renewed missionary zeal. The fourth chapter addressed the topic of integral formation.’ He went on to say that, ’Only then will the time of its realization and implementation begin. Local churches will begin dealing with their final text and adapt it to their conditions, their environment.’

It is clear that Pope Francis wants the Church to be a synodal place, a place of openness and conversation more than judgement, and that this is what he wants young people to experience in the Church. In his opening homily to the Synod he said ‘The gift of that ability to listen, sincerely and prayerfully, as free as possible from prejudice and conditioning, will help us to be part of those situations which the People of God experience. Listening to God, so that with him we can listen to the cry of the people; listening to our people, so that we can breathe in with them the desire to which God calls us.’